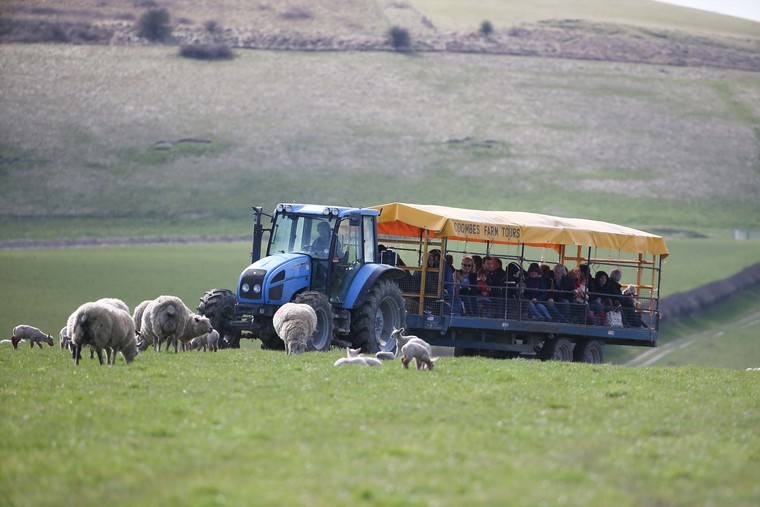 Church Farm is set in the hamlet of Coombes, in between Shoreham and Steyning, West Sussex, and is where the Passmore family has been farming for five generations since 1901.

A 1,000-acre working farm, it stretches from the hills of the Downs to the banks of the River Adur, with 140 acres some two metres below high tide. Today the farm is run by Jenny and Andrew, her 28 year-old son, who took over from his Uncle Trevor, who passed away six years ago.

The family is passionate about farming, the environment and food education. Over the past 40 years they have received half a million visitors to the farm, said Jenny, who started running farm tours at Coombe in 1979.

Before that her late parents Dick and Mary Passmore ran open days for the public throughout the 1960s and 70s. Dick was passionate about food education and conservation, and in recognition for his work received an MBE in 1992.

Arriving at the farm I meet Jenny, Andrew and his partner Gussie, along with their two young children James and Connie.

We take a tour of the farmyard, checking out the collection of traditional and more modern farm buildings. They explain that most of the barns are being used to house their flock of expectant ewes which have just started to lamb.

At the time, only 25 had lambed, with another 575 to go over the next six weeks, explained Jenny. They lamb all their sheep indoors, with ewes and new-born lambs penned in wooden pens for two days before being taken out to pasture. It’s a system that suits the farm being open to the public, who get to see more of the action come rain or shine.

This year they are open until 24 April; they typically receive over 20,000 visitors each year.

“Bookings are taken through their website www.coombes.co.uk. Ticket prices are kept low (£4 per child and £5 for adults) to make it accessible for most families,” said Jenny.

“Refreshments can be purchased on site in their dedicated visitor space, but families can also bring their own picnics to eat,” she added.

Visitors travel from all over, and on their busiest days they can have up to 2,000 people through their gates.

“It produces a good supplemental income – for the farm and myself,” said Jenny.

“Without the public we wouldn’t be able to afford to lamb inside because of the additional feed and labour costs,” she added.

Visitors are also able to see their herd of pedigree Sussex cows and new born calves in their cattle barns. They can also take a tractor and trailer ride up onto the Downs to see sheep and cattle out grazing in the fields.

Eager to see more of the farm myself, I take up Andrew’s offer of a quick tour of the fields. I jump into the back of his pickup truck and we drive up onto the Downs behind the farmyard and along a flint track with far-reaching views out to the English Channel. Arriving at a large 60-acre field, Andrew calls out to his flock of ‘early lambers’ – 200 mainly Charolais ewes and their offspring – which come running over to greet us.

Reaching down, he points out their new herbal ley which he planted back in the autumn.

“The ley includes 15 different species, including two types of nitrogen fixing clover, and was planted as part of a land management option developed with and funded by Southern Water aiming to reduce nitrate leaching into groundwater,” said Andrew.

I ask how he thinks it’s performing? It’s early days but he’s “impressed,” he replied, and thankful he won’t need to apply nitrogen, saving him considerable expense.

On land management, Andrew said “farming in harmony with nature is a key part of our approach,” adding that he is relieved they still have one more year left in Countryside Stewardship HLS.

Under their existing agreement they have been doing more conservation work, putting in various wild bird feed strips as well as honey and nectar mixes for pollinators. On their brook ground they have grassland for winter wader and wetland birds. He added that where possible they try to maximise environmental gain by creating habitats next to existing nesting sites and hedges.

Soil health is a high priority and something they have been learning more about through their involvement in a local farm cluster, the Arun to Adur farmers’ group. The group, which has 31 members, covers nearly 11,000 hectares of chalk downland habitat and was setup in 2015 via the Countryside Stewardship Facilitation Fund.

In 2017 the group launched a five-year project to study how different techniques affect the various soil types within the area, looking at organic matter, nutrient availability and soil biodiversity. The project is being led by forward-thinking agronomist Stephen Woodley and Southern Water, and hopes to produce comparable data that can be used by farmers and agronomists to improve soil health throughout the region.

A more recent project has helped increase awareness and understanding of the effect of soil health on water quality, particularly nitrate leaching to the chalk aquifer, an important drinking water source. Building on this work, many of the group’s members (including Andrew) have taken up land management options developed and funded by Southern Water.

I was interested to hear more about the history of the farm; Jenny described how her great-great-grandfather moved here from the West Country in 1901.

“They hired a train and after milking in the morning, loaded up all their livestock, machinery and people and milked here in the afternoon,” she said.

The family carried on milking until 1954, when Jenny was born. They switched to running a herd of beef suckler cows instead. Jenny’s parents Dick and Mary ran the farm until 2000, when Dick Passmore died.

Under their stewardship the land was farmed intensively, said Jenny. They grew around 600 acres of arable crops, with the steep downland being fertilised from the air in the 50s and 60s. Jenny recalls the dare devil pilots flying under the pylon wires.

In addition to arable, they ran a flock of 800 ewes and a herd of 120 Hereford Friesian suckler cows, as well as fattening 500 calves a year.

“Every October Dad used to go to Wales to buy in beef calves to fatten as well as all our replacement ewes.

“It was intensive,which people criticise now, but it was done to produce food to feed people,” she said.

He was also a keen conservationist and set aside less productive areas of land to plant new woodland, buying end-of-season trees to create his ‘follies’ she continued.

Jenny’s late brother Trevor was a keen fisherman and in 1990 he dug Passies Ponds at Coombes as a farm diversification. It is now very popular with visiting anglers, with three lakes and a café which is open seven days a week.

Up until last year they also used to offer DIY weddings in one of their modern barns, but after 20 years have decided to call it a day, and plan to let the barn commercially instead.

They will continue to hold different events on the farm including Glastonwick, a real beer and music festival due to take place in June. Coombes has hosted the small festival for over 13 years and the Passmores lay on tractor and trailer rides for the 500 festival goers to tour the farm and see their cattle and sheep.

The latest venture is their maize maze (in the shape of a sheep), which they trialled last year. They opened to the public in the month of August and in the October half term, Andrew explained. It was a big hit with the public and they are planning on repeating it this year.

More information can be found on their website (www.coombes.co.uk) and their Facebook pages (Coombes Farm, Lambing) which has a community of 10,000 likes.

One of the big drives for the Passmores is educating the public: “People are so disconnected from agriculture and we give them the opportunity to learn more about where their food comes from,” said Jenny.

Sadly she said that new health and safety legislation introduced in 2018 has made it almost unworkable to open their farm to the public.

Farmers who exhibit animals for educational or entertainment purposes have to buy an animal activity licence under new rules from the Department for Environment, Food and Rural Affairs (DEFRA). They were previously exempt under a 1925 law.

“We want to stay as we are – a working farm. A working farm that has opened rather than set up an animal area for petting,” she continued.

“Until they introduced this new legislation we used to put children into the pen with clean straw. Now the only way people could get in with the animals is if it were a concrete floor. Having young lambs on a concrete floor is not good enough for the welfare of the lambs.”

The public are allowed to lean over and stroke them, and they still do bottle feeding – “it’s now over the fence rather than in,” she said.

In addition they’ve had to install more hand washing and hand gel stations on the farm and increase the number of volunteers.

Despite all the extra red tape and additional costs, they are determined to stay open and Jenny says she is on her third generation and possibly fourth generation of visitors to the farm.

“Some people have come nearly every year since we started. Sometimes when something happens it’s easier for me to keep quiet, as the people who have been before will explain what’s happening.

“They’ve all learned that they come out with two feet then a nose. We’ve kept our price well down so people can keep coming. We could put our prices up and earn more money,” she said.

As a new venture Jenny’s daughter Pamela has started running late night lambing for small groups of adults, which has proved popular.

The past two years haven’t been easy with Covid-19. “We had one vet student, Andrew, and farm staff,” said Jenny. This year they’ve got nine vet students booked in. It’s the education point of it too – plus they can educate the public.

“Dad always had farm students on the farm and we’ve carried on the same way,” explained Jenny. “People helps us and we help others. You need to educate the next generation otherwise there will be a lack of knowledge.”

Over the years they’ve had lots of vegetarians and vegans visit the farm, commented Jenny.

“If people ask what happens to the lambs, we don’t shy away from telling them they are for food production and explain that they wouldn’t be here if it wasn’t for that purpose,” she added.

The majority of people understand and are well behaved, but there is the odd trouble maker.

Andrew recalls numbering up lambs with spray paint when a vegan activist started telling children watching him that the lamb he was spraying was next to die.

Andrew politely asked her not to spread information that wasn’t true. After she left, several visitors congratulated him for standing up to her.

Jenny described how they have converted several farm visitors back to eating meat. “Seeing how well our animals are cared for at Coombe changed their minds,” she said.

The future direction of farming

Despite the challenges facing UK farmers, the Flakes are optimistic about the future. They would like to see a greater emphasis on food production and believe current government policy could lead to food shortages.

More could be done to educate the next generation about where their food comes from, they say. Our conversation turns to Clarkson’s Farm. They are both huge fans and think he has done more for the image of farming than anyone.