Think carbon before anything else - South East Farmer 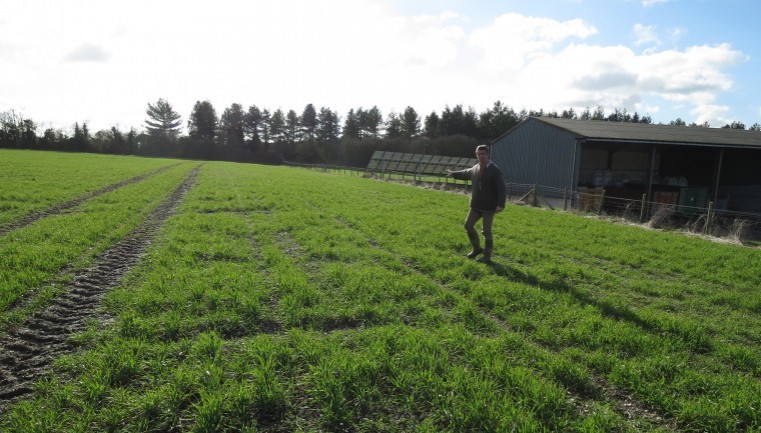 Soil is deteriorating and running out: an inch can be lost during rain and washed into the sea.

Soil runs off farms, is blown away and becomes salinated and degraded. “It is a bit like oil – it is a renewable resource but we are using it much faster than it is being created,” said Julian Gold, farm manager at East Hendred Estate in Oxfordshire.

He farms 800 hectares of highly alkaline, silty clay loam soil over chalk, with an annual rainfall of 679 millimetres. The farm operates a five year rotation of oilseed rape, winter wheat, spring beans, winter wheat and second wheat, together with winter or spring barley. It also includes sheep and a commercial shoot.

Mr Gold has a strong philosophy focused on soil management and nutrition for healthy crops which is why he introduced a controlled traffic farming (CTF) system which remains flexible to the season to minimise soil movement and maintain good crop establishment.

“My whole thing is that soil is a non renewable resource and we have to think of it in the same way as oil. Peak soil – it’s quite neat really – you take the ‘s’ off and you have oil.”

Since the second world war until about ten years ago when people became more enlightened, thinking about soil did not really matter because it was possible to farm even though the soil had no structure, no organic matter and no living soil biology.

“All we really needed in farming was a medium to stand the crop up in – almost like hydroponics,” said Mr Gold. “We had enough sunshine and rainfall and weather patterns were more stable in European areas before global warming. Inputs were cheap as the companies sold us seeds, sprays and fertilisers. Everything the crop needed, we were giving it. But all those inputs were based on non renewable resources such as oil. It was crazy – we weren’t really asking the soil to give the crop anything.”

Now, though, two things are happening. Non renewable resources such as oil and phosphate are gradually running out, so that nitrogen fertiliser will become very expensive. Pesticides will also become more expensive and less available as the hazard based European Union legislation begins to bite. In addition, weather patterns are shifting so there are more droughts, cold periods, storms and downpours.

Luckily, though, the post second world war philosophy that the soil is irrelevant and crops can be given everything they need externally is changing. “Now farmers need more resilient soils to cope with unaffordable inputs and extreme weather,” Mr Gold said. “We want soils which will hold moisture and the biology will feed the crop with the available nutrients through symbiotic relationships.”

Mention the main nutrients in crop production to most farmers, and they will say nitrogen, phosphorous, potassium – and work down the list and reach trace elements. “But to me, that is such a bad way of looking at crop nutrition. Before I even start looking at these, I think the first main nutrient in crop production is carbon because you need it to feed the soil before you start topping up the crop with other things. Our philosophy is not to pile N, P, K and sulphur and lime on to the crops. Until we have fed the soil with carbon, I don’t even think about these other nutrients.