The size may change but not the quality - South East Farmer 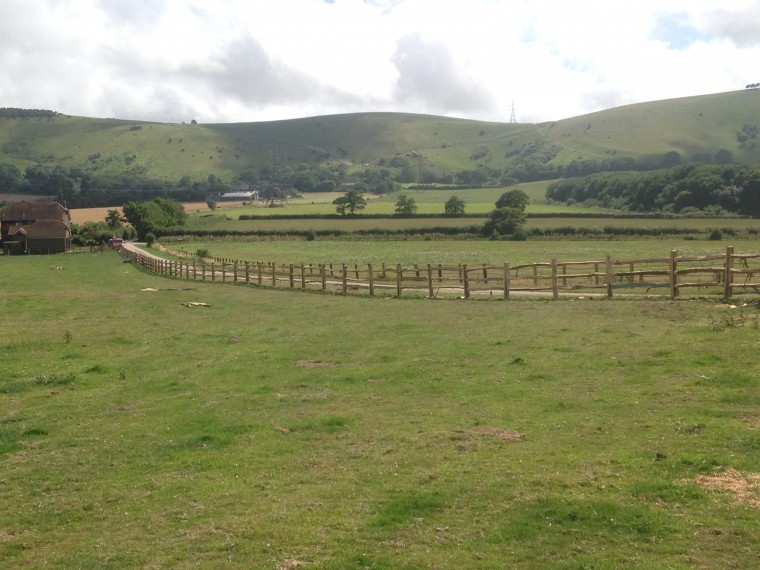 When it comes to stress-testing stock fencing, Simon Davey has the ultimate solution. His chestnut fencing is currently being used to keep the rhinos in Marwell Zoo at a safe distance from the viewing public.

It’s true that the fence posts aren’t your standard size, but then that’s the other beauty of the Meyers and Davey Ltd offer. Because Simon selects and cuts his own fence posts from standing timber, there is no such thing as a ‘standard size’.

The company’s long-lasting chestnut stakes, posts, rails and barn timbers are whatever size the customer wants them. “We don’t have a catalogue; we have acres of woodland to choose from,” said Simon, who provided a range of fencing for the Winchester zoo’s new Wild Explorers area earlier this year.

The company’s bespoke offer was a godsend to one of the contractors, Southampton-based Greenspan Projects Ltd, as they set about turning a London architect’s vision of the new themed area into a reality.

“The plans called for an amazing selection of timbers of all lengths and a vast array of diameters, including some that were hefty enough to keep the rhino safely in their compound,” said Simon. “Greenspan had tried a number of timber suppliers but since they only supplied from stock, no-one could help.

No-one, that is, until Roger Holmes, a member of Greenspan’s pre-contract team, contacted Simon, whose business is based at Lower Hill Farm, Bexhill.

“He sent me the list of what he had been trying to buy and I could immediately see his problem,” said Simon. “It was no problem for us to source, but I could see why he was having a problem with some of our competitors who only supply a set range of sizes.

“The sizes went from 1.2m, which is far smaller than anything we would normally be asked to supply for stock fencing, through to 10-inch diameter posts that were 4.2m long. It was an amazing list but we cut it to order, delivered it to the site and then went back later to install it all.”

That can-do approach also sets Meyers and Davey aside in the more conventional world of agriculture, where a combination of experience, the right quality product and keen pricing has given it an established reputation among farmers and landowners.

In an industry where guarantees are plentiful but are often hedged with small print, Simon only uses chestnut, a hardwood that has been used for fencing probably since man first needed to keep animals in one place.

“The longevity of winter-cut chestnut is well known,” he said. “Because it’s a hardwood it doesn’t need treating and so there is no risk that untreated or cut areas will rot. The industry has proved over time that this is the ideal fencing material and the fact that we cut our own means we can fulfill any commission.”

While keeping white rhinos and people separate is one of the more unusual aspects of the job, Simon’s own experience means he understands the more common challenges facing farmers.

He keeps a mixed herd of continental and native beef cattle at Lower Hill Farm and other land that the family business rents locally and has a countryman’s understanding of the need for stock fencing that does the job as well as looking the part.
“There are plenty of people who can put a fence up, but it’s important to have an understanding of what the fence needs to do and what challenges it can expect to face over the course of its life,” said Simon.

“I was born and brought up on a farm, I spent some time at agricultural college and I am still involved in farming every day of my life, which means I know what I am doing when it comes to making sure fencing does the job it is designed to do.”
While Simon heads a team of people and makes full use of online marketing methods through his website at www.fencing4farmers.co.uk, he still likes to get his hands dirty and can usually be found on site.

Those sites are usually left in pretty much the same state as they started, since the company’s investment in the latest post-driving machinery protects the landscape from serious damage, something that is very important for many of the clients who ask Simon to work on their Higher Level Stewardship sites.

Others including the National Trust benefit from the Bryce Suma Fencemaster, one of only a limited number built by the renowned Jock Bryce and designed to cope with everything the Scottish weather can throw at a fencing contractor.

The Fencemaster is built by converting a four-tonne tracked Mitsubishi dumper to take a post driver on the back. “The clever part is that the operator can position the dumper using one set of controls at the rear, which provides one-person operation,” Simon explained.

The conversions are highly specialist, with each vehicle built to order and set up slightly differently depending on what the customer wants. “Because the vehicle is tracked it can go virtually anywhere, even in bad weather, and it makes far less mess of the ground, particularly when it is wet.”

While other contractors use tracked vehicles, they are often narrow tracks so that they can be towed to site by a four by four. “My Fencemaster has tracks so wide that I need to take it to site on a low loader, but the wider tracks and its design in general mean much lower ground pressure and less soil compaction,” Simon explained.

The other benefit is that the posts are all carried on the machine, which means there is no need for an additional trailer alongside the post driver. “It means the only vehicle on the site is the tracked one, and that hugely reduces the impact on the land.
“We are currently putting in 5,000m of deer fencing on an estate in Stonegate – again it is bespoke because of the height needed – and we will do the whole job with just a single vehicle.”

“In the past I would have needed one person to drive the tractor hauling the equipment and someone else to operate the driver, but now I can do it all myself, halving the manpower and making the job much more efficient.

It also allows him to work on some of Sussex’s more challenging landscapes such as the South Downs, where he works for clients including Plumpton Agricultural College, the National Trust and farmers and landowners alike, often at the very top of the South Downs National Park and much of it at some scary angles.

He commented: “You simply wouldn’t be able to do some of this work with a tractor because the man driving it would have lost his nerve long before the vehicle itself was in any danger of falling over.

“It’s so much easier standing on the ground and controlling the driver and the vehicle from the same position, behind the machine.” Not only is it impressive in difficult conditions, but the Fencemaster is fast on the flat, averaging a post a minute on a good day.

The family firm of Meyers and Davey, which has been trading for 65 years, offers pest control solutions and gates as well as agricultural and equestrian fencing across southern England and can even supply the kind of specialist timber needed for traditional pole barns.

“It is no longer possible to buy old telegraph poles any more, so people who are looking for that kind of timber are coming to us,” said Simon, who studied at Writtle Agricultural College before undertaking a wide apprenticeship that took in all aspects of agricultural life.

Meyers and Davey carries out a lot of work for local land agents in the South East and much of the company’s work is repeat business or comes about following a recommendation from a satisfied customer. “We enjoy a close working relationship with some of the top land agents locally,” said Simon.

The company has also created woodland tracks and built bridges and stiles, many for the National Trust to help its task of protecting and enhancing the South Downs.

“There is no real restriction on the site or shape of the timber we supply simply because we cut it all ourselves. It can be round or square and as long or short as you like – and because we only use chestnut we know it will last for many years, regardless of whether you cut it or drive staples into it.”

The Wild Explorers area at Marwell Zoo features plenty of examples of Meyers and Davey’s bespoke work, including the entrance sign, which is carved into a large limb which has been cut to provide a flat area on the face but is otherwise intact.
The other enclosures have a deliberately natural look, with ‘visual fencing’ made from a wide range of timbers of all shapes and sizes and all provided by Simon and his team.

“Zoos are clearly different from farms, but the principle is the same; we thought carefully about the function and then we came up with exactly the right pieces of timber for the job,” said Simon.

“We can do exactly the same for farmers and landowners, whether we are creating an arena for equestrian use, a pest barrier or stock fencing for any animal you wish to name – including white rhinos, zebras and oryx.”