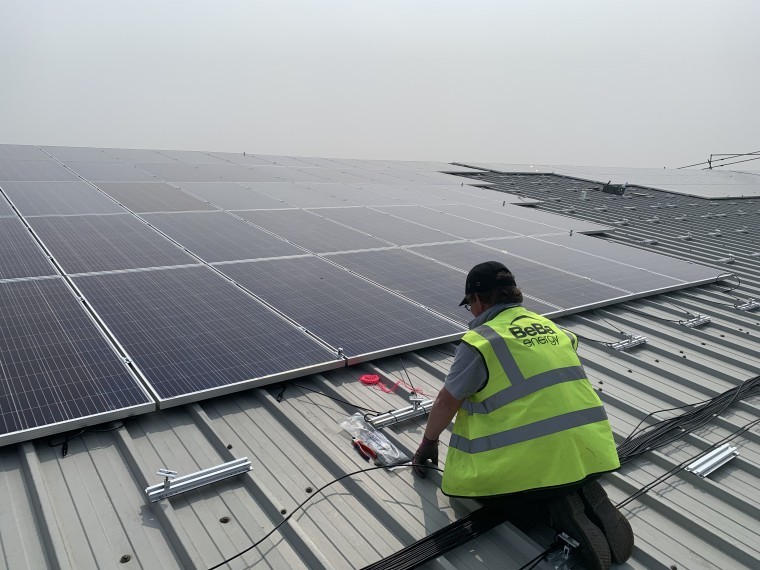 On 1 April 2019, the government’s feed in tariff (FIT) closed its doors to new applicants. Since its introduction in 2010, the popular scheme has incentivised thousands of businesses to invest in solar PV by providing payments for surplus energy supplied back to the grid, and guaranteeing a set rate for any power produced.

While the withdrawal of the scheme has led many in the renewable energy sector to question the long-term investment appeal of low-carbon electricity generation technologies, Stephen Palmer, managing director at BeBa Energy UK, is confident that solar remains a very promising, viable option for all farmers and agricultural businesses operating the South East.

“Over the last seven years, I have seen the average price per unit of power increase 14% year-on-year,” said Stephen. “Many are now paying almost twice as much for their electricity, with costs having spiralled from around 8.5p/kw to an astonishing 15.5p/ kw. A figure which doesn’t even include the ever-rising government-imposed Climate Change Levy (CCL) that is currently sat at 0.84 p/kw purchased.”

With electricity prices set to head in a steep, upwards direction for the foreseeable future, business owners looking to protect themselves from unpredictable rising costs should not be deterred by the closure of the FIT scheme and can continue to explore the incredible investment options solar continues to offer.

“Agricultural businesses, especially those reliant on heating, drying and refrigeration, are typically classed as ‘energy hungry’ sites,” said Stephen. “This makes them extremely vulnerable to even the smallest increase in energy unit prices and as such, for any business which is capable of using over 70% of the electricity generated on site, solar is still showing very strong returns.”

As well as providing security and peace of mind over the long-term cost of electricity, solar technology has come a long way in the last decade and the capital cost per kw of solar installed has reduced significantly more than the cost of electricity (per kw) has increased. It is also truly sustainable technology which will provide carbon free energy for at least 25 years past its original payback. Interestingly, it only takes around one year to recoup the carbon used in its production.

“When you are up against an ever-increasing energy market, knowing that your properly designed, installed and maintained solar system is delivering long-term fixed price energy costs is a huge relief,” said Stephen. “Most farmers will now know at least one person who has had solar fitted in the last 10 years. There is no longer a stigma attached to what was once an unknown ‘new technology’ and in fact solar has proven itself to be financially worthwhile time and time again.”

For those located in the South East, a typical 50kw system, with an installation cost of between £40,000 to £45,000 will payback an energy hungry site in just seven years (see table 1). These calculations even factor in the costs of essential on-going maintenance and are based on energy prices rising conservatively at only 5% per year.

Large agricultural businesses with high power demands, such as poultry units and fruit growers, with refrigerated warehouses and packhouses which are becoming more reliant on robotics, will also notice that the figures become even more attractive. A standard solar system, costing circa £700,000 per megawatt (MW), should payback in around five years (see table 2).

“At BeBa we are fully aware of the increasing demand for renewable electricity solutions,” said Stephen Palmer. “Fruit is being kept in cold storage for longer to extend the seasonally availability of British produce and packhouses are investing in more machinery to curb labour shortages. On top of this, supermarket buyers are becoming increasingly focused on the environmental impact of food production. Sustainability is not just a buzz word anymore, it’s a real game changer for many businesses and their client base. Solar can not only help farmers to move towards more sustainable practices, it can also provide reliable, low cost and low carbon energy.”

In April 2019, BeBa Energy UK started working on two high profile, Kent based, large scale solar installations. This proves that a strong solar industry is on hand to provide farmers and growers with financially viable renewable energy options without the need for the FIT scheme.

The first project will see the construction of what is expected to be the largest privately-owned roof mounted solar system in the South East, as 3,986 panels (or 1.1MW in capacity) is being installed at Mansfield’s in Kent over the coming months.

Also, in the fruit sector, a second project has commenced at Berry Gardens’ New Wares Farm facility. The expert team at BeBa is now working on a new 1MW capacity system, which is being installed to help the large, state-of-the-art site, which has a finite energy input capacity and a large electricity draw, produce as little CO2 as possible.

“When it comes to financing these projects, there are many options available now, from capital purchase to power purchase agreements (PPA),” said Stephen Palmer. “If you have an appetite to look at solar but are uncertain about onsite usage and the potential impact it would have on your farm, our highly experienced team is able to look at power consumption via a half hourly metering system to assess the long-term benefits for you.”