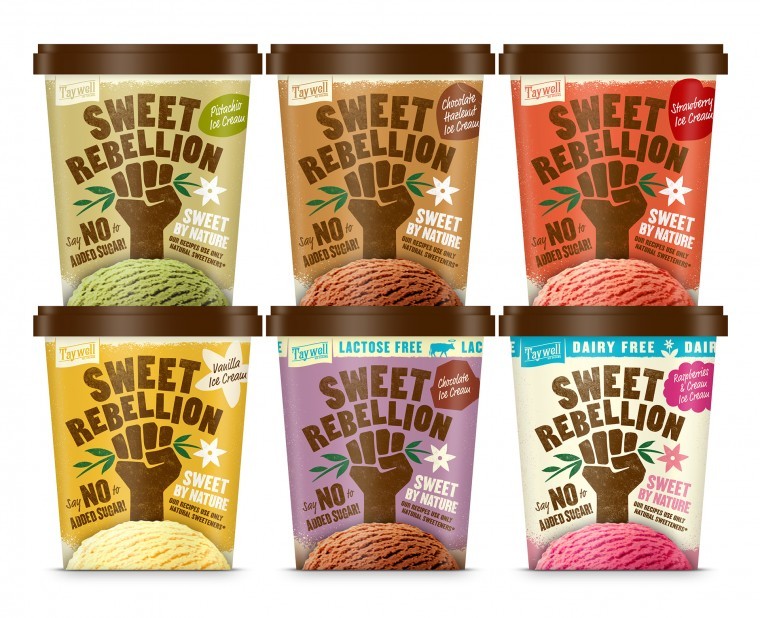 In the raspberries and cream dairy free ice cream, for example, the list includes chicory root fibre, agave nectar, Palmyra jaggery, erythritol and steviol glycocides. There’s no skimmed milk powder, refined sugar or any of the other ingredients associated with commercial ice cream.

Chicory root fibre contains inulin, a carbohydrate which, among its many properties, makes people feel full after they have eaten the ice cream. Agave nectar is a sweetener commercially produced from several species of the agave plant. Steviol glycosides are the chemical compounds responsible for the sweet taste of the leaves on the South American plant stevia rebaudiana. Erythritol is a sugar alcohol which has been approved for use as a food additive. Palmyra jaggery is one of three types of palm trees which produce sweet sap – the other two are coconut and date palms. But Palmyra is far higher in minerals and essential vitamins: it is the only plant based source of vitamin B12 in the world.

Why put such special ingredients in ice cream? “These sweeteners are absorbed into the blood stream without people putting on any weight,” said Alastair Jessel, managing director and founder of Taywell Ice Creams, which is made by 14 people at Paddock Wood in Kent. “The point has been to try to replicate our normal, existing ice cream but remove the sugar. I have replaced the sugar with five new ingredients – one out and five in, which shows you that sugar is very much the magic bullet in our diets.”

After two years of intense research and development (R&D) on the internet and elsewhere, Mr Jessel has come up with what he says is the world’s first natural dairy ice cream made without sugar and which is lactose free. “I don’t think you can buy lactose free ice cream anywhere in Europe,”

Like all significant discoveries, the research has produced intense frustration as well as deep satisfaction. On the frustration side, Mr Jessel is not allowed to use the word “healthy” on the front of the ice cream tubs or on his website. “European Union rules dictate that I cannot make certain claims about the ingredients,” Mr Jessel said. “All that I can say is that they are functional foods – or foods which have a potentially positive effect on health beyond basic nutrition.”

Red tape is a headache, but Mr Jessel has the satisfaction of knowing that his new office in Hong Kong puts him on the doorstep of one of the world’s biggest markets – China. Lactose free ice cream would be attractive to the Chinese, especially as only the northern Han clan can tolerate lactose and the other 90% of the population cannot. But there are other reasons why the Chinese will want to buy healthy food. “Breast cancer is growing in China,” Mr Jessel said. “The Chinese never had breast cancer before.” If he can convince the Chinese that the conventional ice cream they are importing as part of their growing interest in western diets is actually hurting them, the potential market is currently worth an estimated $5 billion. In the UK, there are about five million people who avoid products containing lactose, which is about eight per cent of the whole population. “That is just the UK, and if those people are prepared to eat ice cream, then they will pick up on my products. World wide, the market for my ice cream is a multi billion dollar one.” In time, of course, big players such as Unilever and Waitrose will copy what Mr Jessel is doing – and he will let them, because it is not worth taking out patents and having them challenged in the courts by a big company with huge resources.

All this came from small beginnings. Mr Jessel began farming and making ice cream at Goudhurst, but when the neighbours complained because the ice cream business was growing, he moved to Paddock Wood. He sold that farm, and moved to Pembury. “I do not farm any more,” Mr Jessel said. He is aiming for a £1 million turnover this year, and without the spending on Hong Kong and R&D would already be in profit.
Taywell Ice Creams is continuing to expand in the food service sector, selling into places such as Wembley Stadium and the Oxo Tower. Lots of speciality ice cream is produced, including Japanese and Turkish recipes: Mr Jessel has recently made an ice cream based on Kent blue cheese.

The cream used in Sweet Rebellion and Taywell’s other ice creams used to come from Kent, but now the business uses so much that it has to buy from one national distributor based nearby. “In the summer months, we consume between half a tonne and one tonne of cream.” Between one and two tonnes of milk are bought from the same distributor, and three quarters of a tonne of egg yolks are used every few weeks. “We have cleared out the south of England, and the free range eggs come from further north.” The fruit is the only local ingredient – and Mr Jessel can buy everything he needs in Kent. Last year, the business bought an estimated ten tonnes of waste fruit from local growers which had been rejected by the supermarkets.

Sweet Rebellion will have a recommended retail price of £5.25 for a 500 millilitre tub. “It actually costs me between 25% and 30% more than that to produce, but I am prepared to squeeze my profit margin in order to achieve volume sales,” Mr Jessel explained. “I am prepared to go for a bigger market by having the price as tight as possible.” The cost of Sweet Rebellion’s ingredients are what make the ice cream expensive to produce. “Sales of sugar in the UK fell by 14% last year,” Mr Jessell said. “The price of sugar has now fallen well below 50p a kilogram.” By contrast, one of the Sweet Rebellion ingredients, the sweetener stevia, is an astonishing £85 a kilogram – but it is only used in very small amounts.

Three health food distributors are already interested in Sweet Rebellion: Grape Tree, which has shops across the south and up into the Midlands; Waitrose; and Holland and Barrett. “My target audience is more the independents and farm shops rather than the supermarkets, except for Waitrose. I am very wary of supermarkets because of the way they treat farmers and growers.”