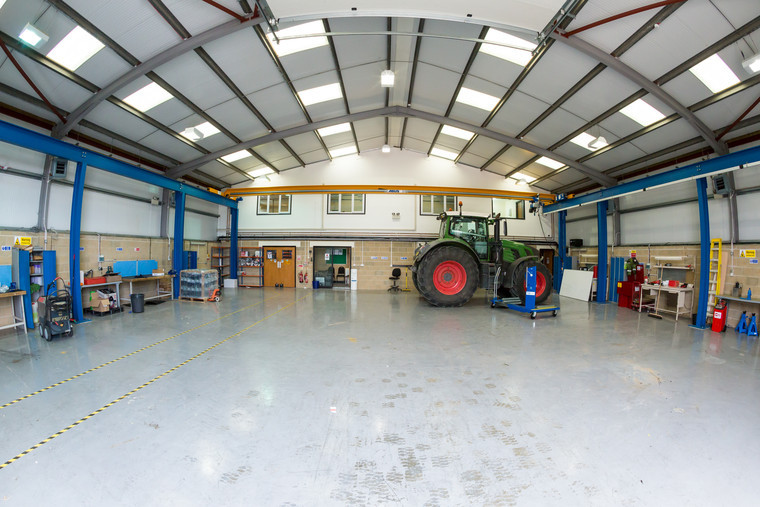 When R W Crawford set out to find a more convenient depot for its Hampshire customers, the aim was simply to provide better customer service to farmers living on the western edge of the dealer’s patch.

While the site itself was less important than the location, the end result exceeded the company’s expectations and has given the dealership a remarkably spacious and well-equipped site with room for significant expansion in future.

“We were looking for somewhere that would cut journey times for farmers who needed to visit the depot; what we found was a superb location that is not just ideal for our current needs but will support future growth,” explained R W Crawford’s sales and operations manager Alan Haines.

The building at Ropley Dene near Alresford was home to Case IH dealer William Wheatley for some 20 years before being used by a technology company that has since moved out of the unit, leaving behind an ideal site for R W Crawford’s fourth dealership.

Conveniently located on the main A21 road, the secure site has an impressively large, level area of hardstanding with ample space for displaying machinery as well as a wash bay. Currently screened by hedges, the company aims to reduce the frontage greenery to create an unbeatable ‘shop window’ for its Fendt, Valtra and other key machinery ranges.

The large workshop, with ample space for four bays, came complete with an existing two tonne gantry crane and was ready for R W Crawford to move straight in.

The rest of the building is now home to the parts department headed up by Luke Smallbone, a useful face-to-face facility that supports the increasing move towards online sales, and a modern office and sales area. The first floor meanwhile boasts currently unused space that is set to be used as a conference room but could be put to other uses.

“It really is an excellent location and provides a great opportunity not just to provide better service to our local customers but to facilitate future expansion and new offers,” said Alan, who joined R W Crawford at the end of July and now looks after the new dealership and the company’s other southern depot at Billingshurst in Sussex.
R W Crawford was set up in 1980 in Essex, with a second depot in Charing, Kent, opening in 2014 and the Billingshurst depot coming on stream in 2019.

When the company took on the Fendt and Valtra franchises from John Seale Ltd in 2019 it was clear that customers in the west of the Hampshire and West Sussex area needed a closer location. “Billingshurst isn’t that far from here as the crow flies, but the roads are such that it’s not an easy journey,” explained Alan.

“R W Crawford has always had an absolute focus on customer service, which is one of the main reasons why I was delighted to take on this role, and finding this depot at Ropley was an important step in the company’s growth.”

The event, which runs from 1pm to 6.30pm and includes a hog roast, special deals and prize-winning opportunities, will also feature live in-field demonstrations within walking distance of the depot, a chance to test drive the latest machines and an opportunity to talk to the R W Crawford team as well as representatives of manufacturers stocked by the dealership.

Alongside the impressive Fendt and Valtra ranges, those manufacturers currently include Amazone, Väderstad, Manitou, Ktwo, Spearhead and Trelleborg, but as Alan pointed out: “We are always looking out for new franchises to expand our offer, but they have to fit the company’s customer first profile.”
Parts can be provided from all four of the R W Crawford depots and are usually delivered by the next day if they aren’t available over the counter. “If that’s looking difficult someone will just get in the car and go and get it,” added Alan. “That has been known to cost us money in the past, but the customer was back up and running within a few hours,” said the clearly impressed recent recruit.

Alan’s own journey has been an interesting one. The son of herdsman Colin Haines, he grew up on a farm in West Challow, and apart from sharing the not uncommon ambition to become a professional footballer he seemed destined to work in agriculture.

“In 1996 walked out of my last GCSE exam – which I remember was geography – and within 20 minutes I was wearing a pair of overalls as an NVQ student with Oakes Bros, the New Holland dealership at Wantage in Oxfordshire,” the 41 year-old recalled.

The NVQ turned into a modern apprenticeship and set Alan on a path that saw him work his way up through Oakes Bros and then join AGCO in 2008 as a sales support specialist working with the Massey Ferguson brand. He became a territory sales manager before joining Lister Wilder in 2015, becoming group sales manager and then sales director in 2019.

Remarkably, Alan’s elder brother Richard is now managing director of Oakes Bros, the company he started with. “We have a professional rivalry, but we are the best of friends,” he stressed.

While he has enjoyed his time with other dealerships, Alan said he had never felt as “at home” as he has since joining R W Crawford, with its focus on customer service. “It’s grown into a big company over the years, but it feels like a small company and even the senior members of the team are very hands on,” he said.

That ethos comes from the top. Managing Director Wes Crawford is based at the company’s current Essex depot in Writtle but is still closely involved with the business at the ‘sharp end’, which Alan said was “part of the reason I was keen to join the team”. Nunzio Rio, the company’s sales and operations director, who has been with R W Crawford for more than 20 years, is responsible for Essex and Kent, leaving Alan to head up the two southern dealerships.

Financial Director Russel Oliver has been responsible for bringing the Ropley depot on stream, with Rob Beddoe heading up the operation on the ground “and making it happen”, as Alan explained.

“This is a great team, very hands on, and joining it has felt like coming home,” he added. “Nothing is too much trouble and everyone works hard to put the customer first. This new depot will do just that, while giving us plenty of room to grow the business in future.”

The new dealership has also provided job opportunities in the area, with engineers and sales and parts staff needed to make it all run smoothly. While the new workshop is large and impressive, R W Crawford also provides a mobile service, tackling even major repairs on farm if required.

Another existing member of the team set to play an important role is James Freemantle, who has 30 years’ local experience and is now the dealership’s business and development manager.

One member of the team who will be playing a vital part at the open day event and regularly visits customers to talk to them about new products is Luke Morley, product demonstrator and technology specialist.

“Customer choice has increasingly been driving the sales process online, particularly amongst younger farmers who are more used to the technology, but our sales team is still keen to connect with customers and we still enjoy the chance to chat about the next potential purchase over a cup of tea in a farmyard kitchen,” Alan said.

“In the meantime, we are hoping customers will join us at the open day to see what we now have to offer here in Hampshire.”