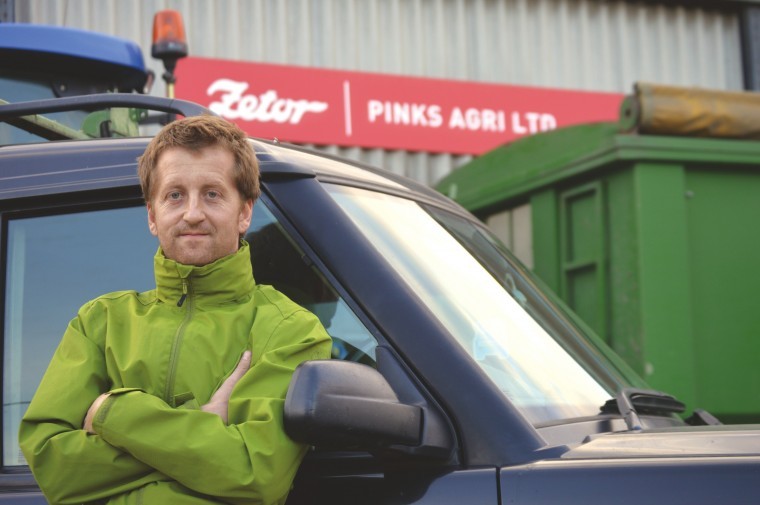 “Not everyone wants to have to plug their tractor into a computer whenever it has a problem, particularly contractors,” explained Robert Burr, who has set up Pinks Agri Ltd at Great Pagehurst Farm, Staplehurst in Kent, to give farmers and contractors a wider choice.

Robert has reintroduced the well-established but essentially mechanical Zetor brand, last seen in Kent more than five years ago.

The Zetor range, which first appeared in 1946 and saw its UK heyday back in the sixties and seventies, once lacked some of the frills of the big name brands but has always been renowned for being reliable and hard working.

“It’s essentially mechanical, meaning that most people with a bit of mechanical know-how can fix everyday problems without the diagnostic computer that most models need these days,” said Robert, who will also have a workshop and a retail area at his new premises.

The shop will focus on providing supplies for hands-on farmers. “It will be a farmers’ shop, not a farm shop,” he stressed. “It will be the place to come for tractor parts as well as practical agricultural clothing, equestrian supplies, stock fencing, wellies and other useful items.”

Alongside Zetor tractors, Pinks Agri will be stocking a full range of grassland and arable equipment, from Vicon machinery to quad bikes and trailers.

“Vicon produce a range of quality equipment that covers everything from cutting to finishing,” said Robert. “It includes balers, disc mowers and mower conditioners as well as bale wrappers and tenders.”

The brand is owned by the Kverneland Group, now part of Kubota, which Rob pointed out would “ensure brand quality and development into the future”.

Robert, whose grandfather Bert Burr ran nearby Wanshurst Green Farm with owner Harold Carpenter, already operates his own high-end car body repair centre, where he works on the likes of Lamborghinis, Ferraris and TVRs.

“I decided it was time for a change,” said the 29 year-old, whose uncle, Robert Head, works alongside him at the business, RSC Bodycraft.

“I have an engineering background, I like machinery and I feel connected to farming through my grandfather,” he said. “I felt that I could fill a gap by providing the kind of hard-working, cost-effective machinery that contractors and smaller farmers are looking for.”

Robert also wants to focus on giving smaller farmers the kind of service that he thinks they sometimes struggle to get when talking to the larger dealerships.

“I am aiming at farmers who want good service and reliable machinery with low running costs,” he added.

Robert has gained an insight into the market by buying and selling machinery over the past five years. He feels he understands the needs of the smaller farmer and contractor and can supply reliable, no-nonsense equipment backed up by high levels of service.

“The Zetor is ideal for contractors and for smaller mixed farms, but the new HD range with its increased horsepower and soon-to-be-released six cylinder engine, it will also be competitive within the larger arable markets.

Zetors tend to have lower running costs over their lifetime than rival brands and although the base model is a no-frills affair it can be ‘specced up’ to meet individual preferences.”

The Czech-built machines are available up to 160bhp and return particularly good fuel efficiency statistics. Robert said that when pulling a five-furrow plough, a 136bhp Zetor Forterra HSX had proved a match for the bigger-engined John Deere 6920.
“They don’t share the current fascination with – and dependence on – electronic technology, but what they do, they do well, and their fuel efficiency is excellent,” he commented. Independent figures released by the German DLG (the German Agricultural Society) rated the Zetor as one of the top brands in terms of fuel consumption.

Robert has created the showroom, due to open on 28 September, by converting a grain store at Great Pagehurst Farm, on land farmed by Guy Eckley at Staplehurst.

Pinks Agri will also be stocking tillage equipment, including disc harrows, ploughs and flail mowers, made by Austrian company Vogel and Noot, and sub-soilers and tine harrows from the well-known Twose stable. The 390 sq m barn also has a yard where second hand machinery can be displayed.

Smallholders and domestic customers will also be catered for with a range of ride-on mowers and garden machinery from Countax along with Echo chainsaws, brush cutters and hedge cutters and Husqvarna chainsaws.

With the shop geared up to serve the equine and hands-on farming market, Robert feels that he is set to win over a steady stream of new customers. “I believe Pinks Agri has found a gap in the market and has the right products to fill that gap,” he commented.