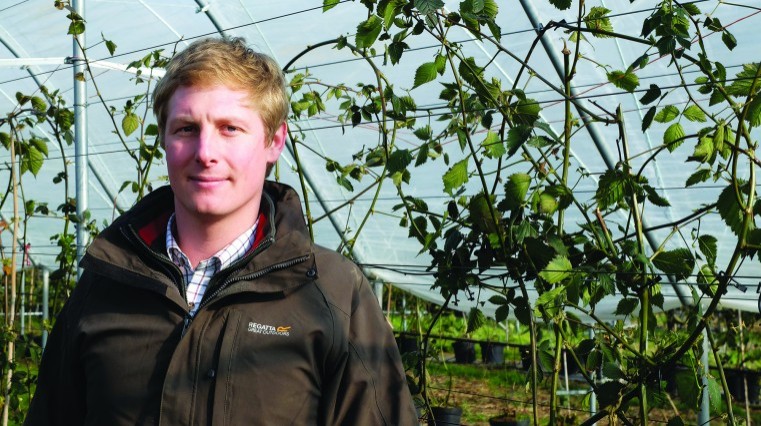 Growing up on the family owned Clock House Farm at Coxheath near Maidstone, Oli had always taken a strong interest in the business, and had worked on the farm from a young age. After studying a BSc honours degree in agriculture at the Royal Agricultural College, Cirencester and having jobs on a number of fruit farms, Oli recognised an industry bursting with opportunity.

After leaving university and having always had a passion for horses, Oli expanded his cross country training course and jump building business which he had been running since leaving school. Once established, he went to F.W. Mansfield & Son as their top fruit irrigation manager. However, two years ago Clock House Farm was given the opportunity to take on an existing tenancy growing soft fruit at Penshurst. “The plan was to stay at Mansfields for a long time but when this opportunity arose it gave me the opening to join the business and establish myself managing a new site.”

Two years on the site now has 40 acres of polytunnels for raspberry and blackberry production, including a new variety of sweet eating blackberry.

Driscoll’s Victoria, which is almost twice the size of a normal blackberry, was introduced to the UK two years ago, exclusive to cooperative Berry Gardens’ growers.

“We are the biggest producer in the co-operative of Victoria blackberries which we’re very proud of. Blackberries are normally considered a culinary fruit but this new variety has created a market for sweet berries that people can snack on,” explained Oli.
The farm also grows Driscoll Maravilla raspberries, which are sold to all the main supermarkets through Berry Gardens.

Clock House Farm believes being part of a grower owned cooperative such as Berry Gardens gives them added strength in a tough market as well as the benefit of the distribution of profits back to the grower owners
“Being a grower on your own you’d be in a much weaker position,” said Oli.

“We feel that we have access to some of the best varieties in the world and there’s a good international exchange of information within that.”

Berry Gardens also helped fund this project though the European Union fruit and vegetable regime, a producer organisation fund which matches investment into a business.

“The aim of these funds is to create strategic investment for improving horticulture. If we’re putting in a major improvement they will match some of the funding which is very useful for the industry and essential to improve and grow it.

“If correctly used funding will allow growers to move quickly enough to ensure our systems are good enough so we can improve yields, reduce labour and remain in business.”

In the last two years, Oli has developed a new polytunnel support system, being one of the first growers to use steel posts rather than timber supports.. This adaption has resulted in a big reduction in labour costs and means any materials are fully recyclable at the end of their life, as opposed to wood which would regularly break or rot.

Oli has also designed a clip that supports the chain which the plant laterals grow over. This clip has been installed over the entire site and other growers are now following suit.

With just six hectares left to complete, all major regeneration work will be finished in the next four weeks, using recycled steel for tunnels and legs and hoops to ensure minimal wastage.

After acquiring the farm in December 2013, Oli’s first challenge was to get plants in the ground at a site which needed much remedial work. By March he had established his first crop.

But time was not the biggest test at this point. Oli identifies recruitment as his greatest challenge, selecting the right applicants and training up a strong group of people to work as a cohesive team. With all 100 pickers and 30 full time field workers being returnees this year, the high staff return rate is a positive reflection on the work environment and its business.

Under a number of agri environmental schemes including Tesco Nurture, Linking Environment and Farming and Red Tractor fresh produce, the farm sets aside a large amount of ground for conservation purposes, including an acre of newly planted woodland, drilling bird seed mixes and keeping 25 beehives.

“We do care about the environment but much of what we do is fairly essential to the business anyway. It goes hand in hand with what we’re trying to achieve. We have a crop protection regime with integrated pest management introducing a lot of predator species rather than chemicals being the first port of call.”

With a lack of information surrounding the upcoming in out referendum on the European Union, the future is uncertain for growers like Oli – although in this sector, provenance is very important to their customers and they are likely to be insulated from the negative effect.

“Food prices are kept affordable by subsidies. It would be unwise to remove these straight away because the industry will suffer. If the price of food was allowed to rise in favour of taking subsidies away this wouldn’t be a problem in the long term.”

Oli grew up at Clock House Farm and has always enjoyed farming. However, it was never presumed he would return to the family farm and certainly not this early in his career.

“I’ve had jobs outside the industry but I have always enjoyed the outdoors and growing things. There’s plenty of opportunity for people in the industry and it’s always been my intention to be involved in agriculture.
“This sector is exciting because it is evolving rapidly. There aren’t enough enthusiastic young people in the industry- it’s very diverse and has a bright future.”

Keen to make his own mark on the industry in terms of both growing systems and varieties, Oli plans to focus on blueberry production next, which will be a first for Clock House Farm. He also hopes to grow crops under glass, which is planned to be the next development for the business.

“My aim is to become a more consistent business for the retailer and customer. I’d like to extend our growing season so that a customer can look for top quality, great tasting British soft fruit all year round instead of relying on imported produce.”