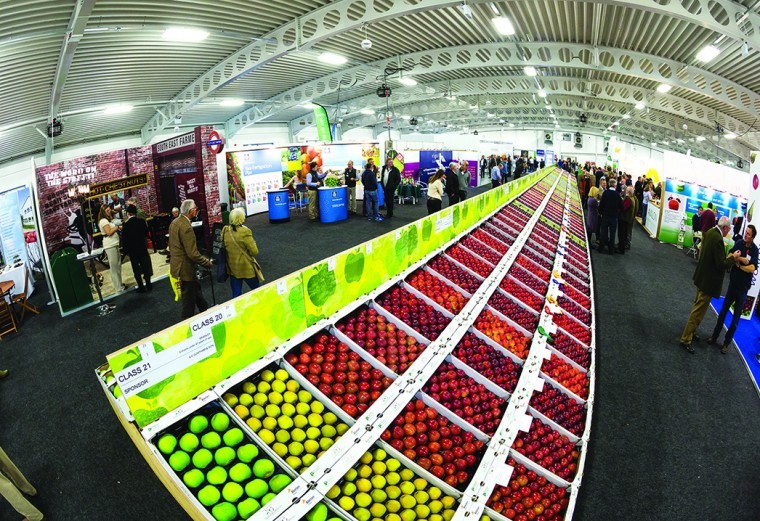 40 growers entered the top fruit competitions with Newmafruit Farms winning the coveted NFU South East ‘Best in Show’ with an entry of Cameo apple gaining 99 points from a possible 100. The same variety from the same orchard won ‘Best in Show’ last year with an even closer perfect score of 99.25. Newmafruit Farms also won the Richard Hochfeld Trophy for the best entry of Kanzi.

The 82nd National Fruit Show saw innovation at the forefront of the English Top Fruit sector. Many of the 93 exhibitors brought the latest technology, software and techniques to the two day show that took place at the Kent Event Centre.

HL Hutchinson Ltd showed the Omni Fruit Vision system which counts and grades apples and calculates accurate yields. The technology can be used early in the season, evaluating the need for fruit thinning then later assessing crop yields.

NP Seymour showcased the new driverless Fendt X-Pert tractors for orchards. The Fendt Vario with Probotiq X-Pert is a tractor that navigates itself through an orchard without an operator in the cab. It uses an add-on for the Fendt 200 Vario series orchard tractors. With patented Teach and Playback technology, the system stores every action (steering, accelerating, mowing, spraying) multiple times per second.

The show was formally opened by Neil Parish MP and member of the Environment, Food and Rural Affairs Select Committee. Prior to entering Westminster in 2010, he was Member of the European Parliament for the South West for ten years and in December 2001 was appointed Conservative spokesman on agriculture.

Sarah Calcutt, show chair said “We were delighted that Neil was able to formally open the Show and see what a magnificent and buoyant sector the fruit industry represents. The competition fruit this year has benefitted enormously from favourable growing conditions and skin colour is the best it has been for a number of years. The display looks fantastic and all our exhibitors and visitors have commented on what a wonderful Show it has been.”

The 2015 growing season will see a record yield particular with Britain’s number one variety, Gala, which has now significantly overtaken Cox. Trade stand space was fully booked and last year’s expansion of the show into the John Hendry Pavilion included space to host the annual National Fruit Show dinner.

The judging of the nation’s ‘Tastiest Apple’ saw Rubens once again take top spot after losing out to Jazz in 2014. The winning apple was grown by Gordon Darbyshire, J & B Darbyshire, Chapel Grange Farm, Five Oak Green and really impressed the judges. The winning apple also won best exhibit in Class 6 Rubens, with 98.25 points. Brian Tompsett who stewards the competition said: “It is very rare for an apple to gain the highest points in the competition judging and also win on flavour.” Cameo took second place with apple entry that also won NFU Best in Show. Third place was won by another Rubens grown by R & D Applegrowers. The ‘Civni’ apple, marketed as “Rubens”, was first developed in 1985 as a cross of ‘Gala’ and ‘Elstar’ apples by the Consorzio Italiano Vivaisti, an Italian apple growers’ consortium from Ferrara. The variety is grown exclusively in Kent and won the accolade in 2010, 2011, 2013 and again this year.

The standard and number of fruit entries for the fruit competitions exceeded expectations with 148 entries of top fruit. Once again, Bardsley Farms were dominant, winning; Class 1, and Class 2, Bramley with points of 97.25 and 98.5 respectively. The farm based in Staplehurst, Kent, also took first place in both Cox’s Orange Pippin classes, 4 and 5. Class 7 Jazz and Class 9 Russets was won by JL Baxter & Son from Maidstone. Farmcare Ltd, Highland Court Farm, Canterbury won both class 8, Gala and class 11 Braeburn with entries scoring 98.75 and 98 points respectively. Loddington Farm, Maidstone won the Any Other Variety with an entry of Cheerfull Gold gaining 97 points, this new variety saw its first UK commercial crop in 2013.

In the pear classes, Farmcare Ltd won the comice and concorde pear class, David Banfield class 14 conference and Rankins Farm won the Any Other Variety of Pear class. Bartons Farm won the novice Dessert apple and AGRII the novice pear. Their entry grown on the agronomy company’s ifarm site at East Malling gained the highest points in all pear classes with a total score of 98. Mallions Farm won class 17, Any other Variety Culinary. Mole End Organics won Class 20, Dessert Apple entrants under 40 with an entry of organic Rubinstep and the new class 21, Bramley entrants under 40 was won by Elverton Farms Ltd.

The Bonanza Prize was also won by Elverton Farms from Faversham which is part of Fruition PO. Mockbeggar Farm growing Gala, Conference Pears and Bramley over 18ha and China Farm, 25ha growing Jonagold, Gala and Bramley. Thomas Johnson, owner was delighted to win the Vigo Ltd Bonanza and will be looking to spend the £1,000 prize fund on an orchard project.

Click here to read the full review with winners and pictures