» Range of expert advice and support 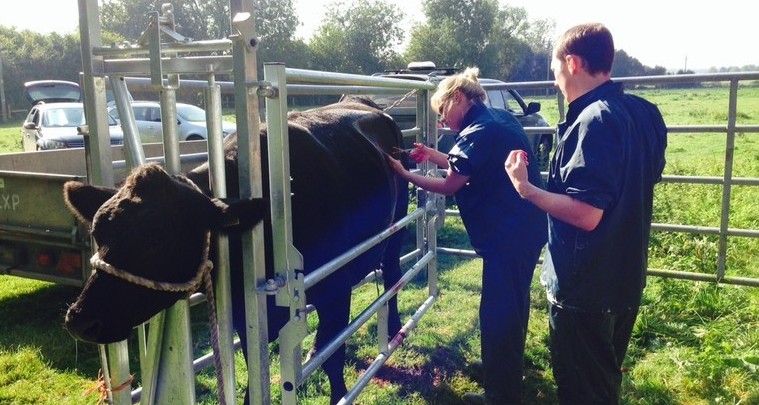 While the primary focus of any vet remains the health and welfare of the animal he or she is treating, there has been a key shift in emphasis over the past few years, as Ian Roper, Senior Clinical Director with Westpoint Farm Vets, explained.

“Farming is first and foremost a business and our role is now as much about data review and about helping to improve the performance of a farmer’s livestock as it is about keeping the animals healthy and eradicating disease,” he said.

“In a number of cases farmers are doing more of the minor, straightforward procedures themselves while making good use of our consultancy skills in areas that can boost their bottom line, such as in fertility and productivity. We want to use our expertise to ensure that farmers see their vet bills not as a cost but as an investment in the successful growth of the business.”

When it comes to business growth, the Westpoint team certainly knows a thing or two, having itself expanded from a single practice to a major player nationwide in just 20 years.

Since 2018 it has been part of the VetPartners group, by far the biggest, most diverse production animal veterinary team in the UK and one which cares for 20% of the UK’s farm animals, including more than 30% of dairy herds and more than 45% of the pig population.

That new partnership has given Westpoint’s vets access to an even broader range of expert advice and support than it enjoyed in the past and has given the business’s clients useful links to specialist services provided by the likes of livestock business consultants Kingshay, another member of VetPartners.

Set up in Horsham in the year 2000 by founder Rob Drysdale, this year marks the vastly expanded Westpoint group’s 20th anniversary, which has come at an interesting time for the veterinary profession.

As well as supporting an increasing focus on productivity, Westpoint has been at the forefront of calls for retailers and the food service sector to support British farming and has established a new Exports By Vets service to support increasing demand for export health certification (EHC).

Westpoint Farm Vets has also been working hard on ensuring the UK is ready to deal with issues arising from Brexit, particularly in the event of a no-deal scenario that would increase the need for checks on products of animal origin destined for EU countries.

“We are adapting to new challenges and to new ways of farming,” said Ian. “The pace of change in the industry has never been more dramatic and we are working closely with farmers and businesses to support their needs, and of equal importance, add value.”

Westpoint has also been at the forefront of supporting farmers in their fight against bovine TB and in 2017 established the TB Advisory Service (TBAS), which was funded by DEFRA through the Rural Development Programme for England.

The comprehensive service provides free bespoke advice to cattle farmers across the High Risk and Edge Areas of England on how to reduce the risk of getting TB on farm and how to prepare for a TB breakdown. Although it is now coming to an end, Ian is hopeful that the scheme could be extended or replaced with something similar.

TBAS was particularly useful for Edge Areas such as East Sussex and Hampshire, where Ian said it “helped farmers take control”. He said farmers were frustrated when they felt unable to do anything about a problem like TB and were pleased to be given advice that allowed them to take practical steps to protect their herds.

Westpoint’s commitment to farming and to animal welfare was shown some years back when other vets in the South East pulled out of TB testing when government funding arrangements made it less profitable. Despite the change, Westpoint continued to test, with a spokesman at the time explaining: “We are committed to continuing because we know how important it is to the farming community.”

Ian has witnessed many of the changes at Westpoint over the past 20 years, having joined the practice at Horsham after graduating in August 2007 just as the second Foot and Mouth Disease outbreak struck. He already knew the practice, having benefited from student placements at Horsham since 2005.

He pointed out that as well as a shift in emphasis in the work now being done, the past two decades had seen a number of social changes, too – including a major rebalancing of the professional team. “When I started there were ten vets – all male – and the support staff were all women,” he recalled.

These days there is a more equitable split between the sexes, with some of the Westpoint Farm Vets practices boasting more female vets than male, the result of a positive move to encourage diversity while ensuring the practice recruits the strongest possible line up of professional staff.

Westpoint’s South East line up encompasses seven vets at its Chelmsford branch, seven in Ashford, four split between the Sevenoaks and Heathfield practices, seven in Winchester and six in Horsham, the group’s original home and still its head office. Together they offer a wide range of specialist veterinary services and shared expertise as well as a business support team.

Ian pointed out that vets could no longer rely purely on their technical skills and qualifications and said they needed instead to share their knowledge in a way that allowed it to be used to benefit the individual farm business.

“It’s not enough for us to learn a lot of stuff and then tell the farmers what we know,” he explained. “We need to understand each business and use our knowledge in partnership with the farmer to help them steer the business in the right direction. It’s increasingly about amassing and understanding data and putting that data to good use.”

He said Westpoint had led the way in working with farmers to help stamp out diseases such as bovine viral diarrhoea (BVD), but said while considerable progress had been made, there was more still to be done.

Ian added that dealing with infectious diseases was another area which highlighted the need to understand farmers and their farms. “In some cases we can work with them to eradicate the disease, but in other cases it’s more important to manage it. It really depends on the individual farm, and that’s why it’s so important to understand the business, its direction and its challenges so that we can give properly tailored advice.

“Effective communication is an important part of our work in this area, particularly when we are dealing with larger farm businesses, when it is important to ensure buy-in from everyone involved, rather than from a single farmer.”

Westpoint’s clients range from businesses with more than a thousand head of cattle down to smallholders, with each having different needs and facing different challenges.

The practice aims to provide a cost-effective service while also attracting the highest calibre of professionals and ensuring that Westpoint is a great company to work for. “The recruitment market is challenging, and we work hard to employ the best possible people,” Ian said. With tailored advice such an important aspect of the Westpoint philosophy, the business looks to bring in new vets as soon as demand increases to the point where resources would otherwise be stretched.

The team’s ability to tackle infectious diseases is boosted by its close relationship with Biobest, a formerly independent laboratory in Scotland that is now part of VetPartners and specialises in scientific, evidence-based research.

As well as tackling disease, the Westpoint team supports animals with mobility issues, helping to tackle lameness both to improve the welfare of the animal and, again, to increase productivity.

When it comes to productivity, a highly important aspect of Westpoint’s work is in fertility and in using genetics to enhance breeding potential. Again, data review is the critical part of the process.

Increasing numbers of farmers are turning to AI to get the best possible results from their herds and Westpoint will soon be offering an embryo transfer service which will allow the optimum use of the genetic potential of the herd by implanting embryos from the best performing animals in surrogate cows. There is the also the possibility of using frozen embryos.

Westpoint also has vets who take a particular interest in sheep, an area of livestock farming that Ian feels can sometimes be overlooked. As well as parasite control, the practice offers ram testing for fertility in the summer and has recently run a ‘tip top tupping’ campaign on social media, something that was not part of the scene 20 years ago.

With farmers looking to reduce their costs, Westpoint offers competitively priced prescription and non-prescription livestock medicines via its online Farmacy outlet, which can also be accessed by non-clients. The keen pricing reflects the practice’s commitment to helping farmers keep their animals healthy and taking a preventative approach to animal welfare.

Farmacy has provided an invaluable service during the pandemic, thanks to its fast turnaround, 24/7 availability and farm gate delivery, and is complemented by FarmSupplies, a similar outlet for non-medicinal equipment.

The practice is also keen to help farmers reduce their use of antimicrobials, both to reduce costs and to meet changing processor demands, and is helping to research alternative treatments and new solutions. “The wider expertise we enjoy by being part of VetPartners is allowing us to share knowledge and ideas and take an evidence-based approach to selecting the best alternative in each case,” Ian explained.

Westpoint’s Exports By Vets service was set up last year to help food manufacturers and producers obtain the EHC documents they need when shipping products containing ingredients of animal origin out of the country. While the service is currently helping those exporting to third countries, it could have its workload increased dramatically by a no-deal Brexit. “The take up has been good so far, but could grow significantly at the end of the year,” Ian commented.

“In essence Westpoint strives to help farmers care for their livestock, grow their businesses and meet the demands of the changing market while maintaining the highest standards of animal welfare,” he concluded.

Pictured: an Roper supervising a Caesarean section by Laura Gibson when she was a new graduate vet