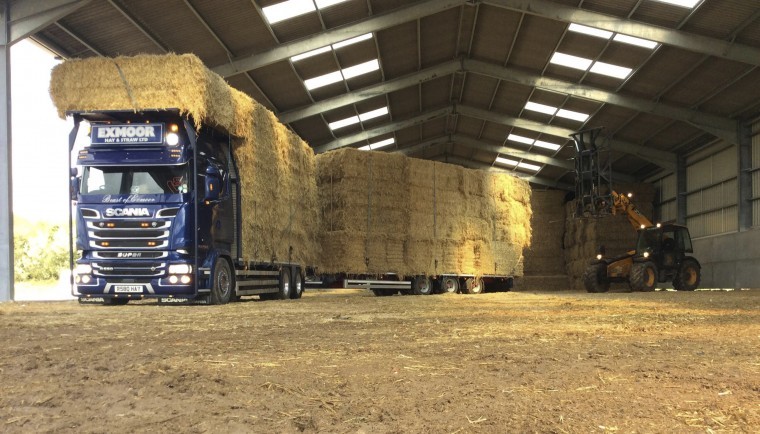 Many RAMSAK Group members will remember the Irish fodder crisis in 2013, when hundreds of loads of hay and haylage were sent to Ireland from late April into early May following one of the wettest winters on record.

In April 2018, following persistent cold and wet weather at the start of the year, Irish farmers were again forced to keep their cattle inside for longer, desperately waiting for the fields to dry out and the grass to grow.

Riding on the back of a dismal 2017 summer and autumn, where the unexpected cold and wet weather led many farmers to start eating into winter fodder supplies early, this soon escalated into a nationwide feed shortage, with many farmers left with only a few days’ feed.

After receiving pressure from farmers and cooperatives, on 4 April the Irish government implemented a fodder import support measure, allocating €1.5 million of financial aid to assist with the cost of haulage to bring hay and haylage into Ireland.

Once again, quick to assist farmers during a time of crisis, RAMSAK teamed up with Irish cooperative farming groups to help alleviate the problem and demonstrate the core ethos of farmer owned groups.

“It’s a big story across the Irish press when pictures of trucks hauling fodder sourced from the UK organised by groups such as ourselves hit the front pages,” said Karen Wheeler, RAMSAK Group manager. “We are ideally placed to work with the Irish cooperatives because assisting with a myriad of supplies and services and supporting farmers in times of crisis is at the very heart of all farming groups.”

In a challenging economic environment for all farmers, there is a strong need for a national network to enable farmers to help each other during a crisis such as this. RAMSAK was set up 27 years ago to help the farming community in the South East of England source machinery and services by creating a single central point of communication, making farmers’ lives easier and helping them to save money.

RAMSAK membership has grown and developed to mirror changes in farming practices, and relationships with similar groups and allied industry suppliers across the UK and Europe have been forged and this has provided an excellent and efficient platform by which forage can be sourced and on its way in a matter of hours.
Having valued the level of service from RAMSAK during the 2013 crisis, one of the smaller cooperatives, Mullinahone Co-op, in Tipperary, contacted the group for forage support and received nine loads throughout the month of April to support its 24 active members.

“We found RAMSAK to be absolutely brilliant,” said Breda O’Brian at Mullinahone Co-Op. “We put in a request to Karen and she turned it around in just a day. The beauty of dealing with another cooperative was that once RAMSAK stood over the process we knew the quality was going to be good. It was a lot smoother than trying to deal with individuals who you don’t know and because Karen has the contacts it was definitely a much better system.”

Due to the market conditions the forage was more expensive than normal, however, with RAMSAK’s input reasonable prices were negotiated and with the quality remaining high, Mullinahone’s farmers were more than happy once they received it.

“Customers can be sure they are paying a fair price for the product as they know what our commission rates are and that we are not placing a pre-determined margin on top of the price,” said Karen. “The Irish cooperatives trust RAMSAK to strike a fair price on their behalf with suppliers without making the most of their plight and loading prices to net a larger profit margin.”

With buyers for hay and straw secured though to spring 2019 the group is actively looking for members with silage, haylage, hay and all types of straw available in conventional, round and big square bale formats.

“The Irish export market is an important and useful outlet for our members’ forage, but it is not the sole destination,” said chairman of the RAMSAK Group, Hugh Goldsworthy. “Creating diverse market opportunities helps to create a more stable market. We can supply forage to Ireland, Wales, Scotland and many parts of Europe, as far as Norway, or we can supply from one member to another a few miles away. Having clear knowledge of forage that is available both locally and nationally is a clear strength to give RAMSAK Group members resilience with shortages, wherever they may be.”