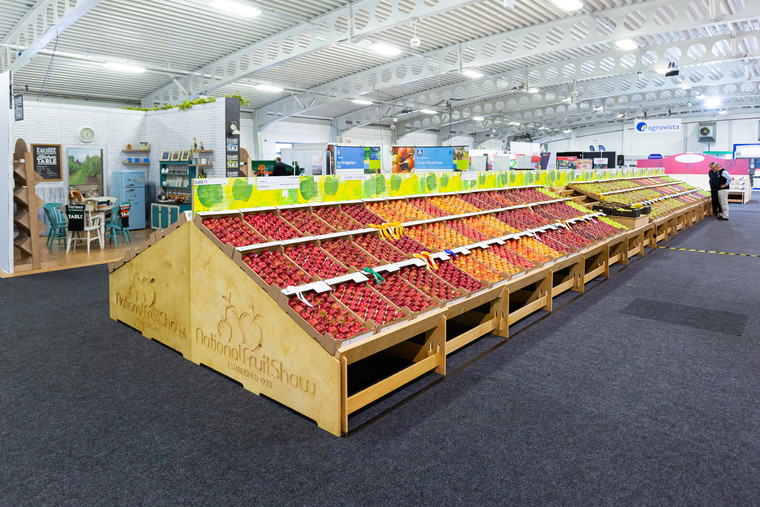 Clockhouse Farm took the ultimate accolade at this year’s National Fruit Show, winning the NFU South East Prize for the Best Fruit Exhibit in Show for the first time with an impressive 99 points out of a 100 in the Braeburn class.

A change to this year’s competition saw fewer judges, but with all of them professional agronomists or technical managers it ensured a high level of scrutiny to which growers responded impressively.

One winner’s success was tinged with sadness at the news that this is set to be their last show. Prizewinning growers R D Applegrowers have bowed to the pressures facing the industry and will no longer be producing top fruit.

The judges, supported by competition manager Norma Tompsett, praised the quality of the entries following a season that did the growers no favours.

Marden Fruit Show Society Executive Chair Sarah Calcutt pointed out that the weather and the shortage of pickers had all worked against growers this year, with show entries around 25% down on the usual number, indicative of the reduced national harvest.

Despite that, she said, the quality of fruit on display was outstanding, with most entries scoring a good 90 points out of the maximum 100.

Summing up the aims of the show, which she described as “a much-loved industry event that delivers a useful and important forum for growers”, she explained: “We are determined that its new features, including the conference forum, new speakers and industry led advice and support, really answer growers’ urgent questions.

“These are unprecedented times, and we are doing everything within our power to ensure that the voice, and needs, of growers are heard by those with decision-making responsibilities.”

Held at the Kent Event Centre, the show was opened by the Minister for Farming, Fisheries and Food, Victoria Prentis MP, supported by NFU Vice-President Tom Bradshaw.

Ms Prentis, who grows apples herself, pointed out that the UK last year produced fruit worth £1 billion, and said the show was an important opportunity to celebrate the success of the sector, which had seen exports rise by 9% over the same period.

She referred to the “challenges” posed to fruit growers by this year’s extreme weather, the pandemic that saw last year’s show restricted to an online-only event and the fallout from Brexit, and said her Ministerial team was “keen to work with the industry to support it through these difficult times”.

Ms Prentis also referred to the labour shortage and said there was a need to make working in the industry “more attractive”, adding that the Government was also looking at automation and pursuing other initiatives in support of growers.

Mr Bradshaw responded to the opening speech by stressing to Ms Prentis – who would not take questions from journalists – that “we need the Government to give this sector confidence”.