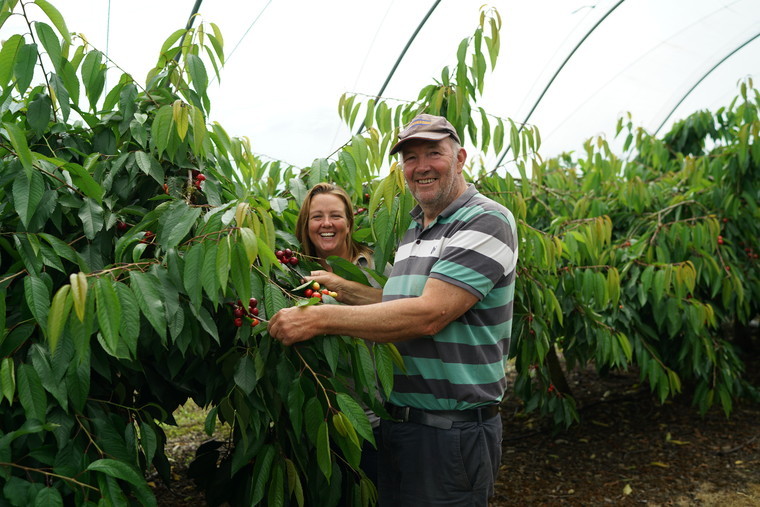 I met Brian Piper and Rachel Sands at their main Hubbard’s lane growing site, where they also sell direct to the public from two farm stalls.

Unlike the cherry orchards of old, with towering 40-foot trees, all their trees are grown under polytunnels on dwarfing root stock. Mainly Gisela 5, some Gisela 6 with a few remaining Colts, explained Rachel. In the past the fruit used to be small, soft and red – the modern varieties of cherries are large, firm and black when ripe.

By growing the trees under polytunnels and using nets, they are able to protect their crop from birds and heavy rain or hail, which could wipe out an entire crop. That’s not to say they aren’t affected by the weather.

This spring, Brian and Rachel spent most of April fighting the late frosts with their new tractor-mounted Frostbuster, a gas powered heater with a large PTO-driven fan to blow hot air up to 70 metres along the tunnels.

Rachel, a trained biochemist who previously worked as a research scientist before joining the family business six years ago, used an app on her smartphone to monitor the weather stations located at each growing site.

Receiving frost alerts most days in April, she spent her nights operating the Frostbuster F252 at high tractor revs. Though the majority of local residents were understanding, they did receive some complaints about the excessive noise, added Brian.

Thankfully this year’s crop looks fairly promising, considering the extreme weather, Rachel said, though yields are predicted to be down at least a third on 2020, which was a particularly favourable growing year.

The Piper family grows around 25 acres of cherries across two sites and prides itself on producing top quality fruit. They grow 30 varieties, Rachel explained. “We’re pretty unusual in that,” she said. “But it gives us a very varied mix and works well for us…however, it takes practice to have control over all the variables!

“Dad has won Champion Basket a huge number of times at the National Cherry and Soft Fruit Show, but more recently I was exceptionally pleased to win a Taste of Kent award for cherries two years in a row. And to win all of the classes we entered at the National Fruit Show for pears last year was incredible,” she added.

I asked if she had a favourite variety of cherry. “My favourite, and I think most of us in the family are the same, is Penny. It’s a big, juicy red cherry. Fairly firm and with a fantastic flavour. A bit more distinctive than some of the others and that’s why we like it so much,” she replied.
A brief history of cherry growing in Kent

Cherries have been grown in Kent since Roman times due to the favourable climate and soils. Henry Vlll is credited with starting the renaissance of English cherries when in 1533 he introduced three new sweet varieties to Teynham from Flanders. During the 16th century, Henry VIII’s head fruiterer Richard Harris established mother orchards now known as the Kings Orchards near Teynham.

More recently, in the second half of the 20th century production declined as many traditional orchards were grubbed out. By 2009 more than 95% of supermarket cherries were being imported from Turkey, with most of the rest being air-freighted from the USA. Fearing the complete loss of a once thriving sector, a group of growers launched the Cherry Aid campaign.

It was a big success and last year’s production saw a six-fold increase compared to 2010’s figures, reflecting the rapid expansion of modern orchards grown under polytunnels. The future of the sector looks promising, too, with an audit revealing the average age of a cherry grower is a decade younger than the average age of a farmer generally.

As we walk along the rows of polytunnels, Brian and Rachel point out the different varieties, from the old school Stella, which they wouldn’t plant any more, to Summersun, which is what they describe as a ‘banker’ as it produces good yields even in a bad year.

Other varieties include Sweetheart, Regina – a firm favourite of the Chinese, said Brian, Tamara – a lovely big cherry but not a great yield – and Henriette, a modern variety they only planted last year and which is already producing a good crop. They are also currently experimenting with Nimba and Folfer and have 2,000 more trees on order from the German nursery in Kloblenz via their agent Frank P Matthews in Worcestershire.

Trees are planted in rows, four to six feet apart, with two rows per polytunnel spaced 3.6 metres apart to allow for machinery. Holes are dug by hand or with the aid of a tractor mounted auger, they explained.

Brian and Rachel aim to replace around five per cent of existing trees every year. Rachel explained: “There is no specific time limit but there has been so much development in newer varieties that older varieties often do not meet customer, or more often retailer, requirements anymore.”

The latest modern varieties can give a commercial crop within two years and reach full cropping potential by year five. To aid growth rates and plant health, all the trees have drip irrigation – called fertigation – which allows the trees to be watered and fertilised to their specific requirements.

I found the difference in the varieties fascinating, trying some of the ripe fruit. I was really impressed with Folfer, a lovely firm, black and deliciously juicy cherry. With enough ripe fruit on the trees, they planned to start picking the Monday after my visit (5 July) and open their farm stalls to the public.

“The picking season is normally the whole of July, with a week one side or the other,” said Rachel. During picking it’s all hands on deck, with the whole family helping as well as employing a mix of local and eastern European seasonal pickers.

Walking further along the row of tunnels, we saw rows and rows of trees laden down with green fruit. Brian explained that sometimes they had to thin the fruit by pulling off the cherries so that the remaining ones could grow bigger.

In another tunnel we saw trees with broken branches. “Badger damage,” Brian said. “Despite electric fencing around the site perimeter and nets at either end of the tunnels they still manage to get in.”

Another challenge to growing cherries is the dreaded spotted wing drosophila, which they combat with traps and spraying schedules.

Over the years they have built up a loyal following of locals who buy direct from the farm gate. I ask where they sold most of their cherries. “We sell around 60% of our crop to two main wholesalers, one in London and one in Bristol,” replied Brian.

The remaining 40% is sold direct, either from the farm gate or direct to local farm shops.

Retailing is an area they are both passionate about and which is increasingly a growth sector of their business. By selling direct they are able to cut out the middle man and maximise their profit margin, while also building a stronger brand for their award-winning fruit.

Social media has been a key brand awareness driver, said Rachel. She set up and manages both a Facebook page, with nearly 700 likes, and an Instagram account. She posts regularly and was really pleased with some professional videos shot on site by a friend, Michael Jackson, who runs a business called Saltwick Media. One of the videos features drone footage filmed by another friend, Nick Keates. You can check these out on their Facebook page. (www.facebook.com/pipercherries/)

She said they had no plans to open a farm shop for the time being, preferring to develop the farm stall by adding other products.

“I can’t see myself entering the farm shop business. After July, I need a break,” she said.

Curious to learn more about Rachel’s farming journey, I asked if she had always wanted to be a cherry farmer when growing up.

“I went to Nottingham to do a biochemistry degree, then went into a scientific job – product development, manufacturing and then a technical purchasing role. I enjoyed it, but 12 years later, dad was saying he was getting too old to farm and he needed to decide what to do.

“It was very much a case of if I don’t do it now, I will never get another chance,” she explained.

Rachel counts herself lucky being able to draw on Brian’s vast experience in the sector, which would have been lost had she not come back into the business.

She also loves being outdoors, and working in the family business gives her the freedom to be able to pick her young children up from school, where she is Chair of the Parent Teacher Association.

“I only have to justify it to myself or dad,” she added with a smile.

Rachel is also Vice Chair of the National Cherry and Soft Fruit Show, which this year is being held at Macknades in Faversham on Friday 23 July. They had a reduced, Covid-19-compliant show last year, she explained, but this year they have new and improved classes and are holding the show in a public-facing location.

“The supermarket class winners will be able to use a gold marque on their packaging next year, like wine labels, and it could be a huge asset to their businesses,” she said.

She hopes for a full complement of entries and everyone is really excited to see what entries people can bring.

Brian and Rachel are a great example of a successful small farming business being passed down from one generation to the next. With the average age of farmers now put at 59, it’s a topic affecting more and more farming businesses.

In the case of Piper Cherries, after spending 12 years outside the industry, Rachel gave up her ‘safe’ office job to carry on the family business. This has enabled her to fulfil her childhood ambition to become a cherry farmer and given her the freedom to do other things.

As I drive home I wonder how many younger farming family members are trying to work out how they can carry on their farming businesses. It’s not always an easy thing to do but as Rachel said: “It was a case of if I don’t do it now, I will never get another chance”.