Ploughing a place in the community - South East Farmer 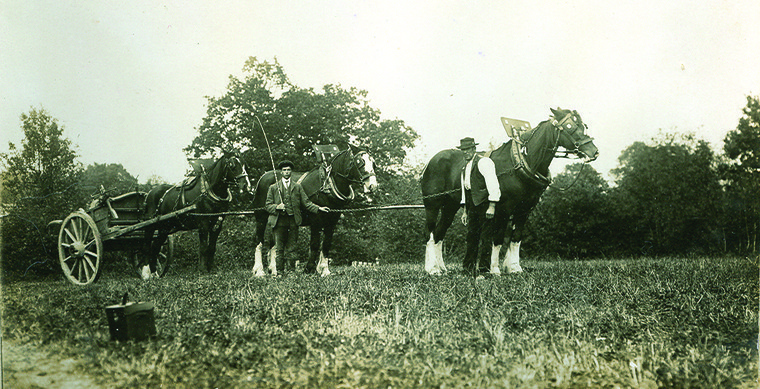 A quick glance at the third page of the schedule for the West Grinstead & District Ploughing & Agricultural Society’s 2021 ploughing match tells you all you need to know about the inclusive nature of a show that has cemented its place in the community over the past 150 years.

Despite being single spaced and typed in a small font, the list of 2019’s Challenge Cup winners in fact spreads well over that page and doesn’t end until half way down the fourth page, where the reader learns that The Late Capt. E.C. Smith Perpetual Challenge Cup for the Best Pit of Ensilage on Farm from 2018 was won by F. De Boer & Partners.

With the 2020 show falling foul, like virtually everything else, of the restrictions imposed because of the Covid-19 pandemic, this year’s 150th anniversary show, which takes place on Saturday 18 September, is certain to be welcomed back not just by the local farmers and farm businesses but by the wider community.

Joint honorary secretary Rowan Allan estimates that around half of the several thousand people who attend the popular annual event, which dates back to 1871, have no regular connection with farming but just enjoy a great day out in the countryside.

And with this year’s event taking place in a popular site near to West Grinstead itself, he expects this year to see another strong turnout from the local populace.

That site is Priors Byne Farm, Bines Road, Partridge Green, where John and Alison Ford are set to welcome the event on to their land for the fourth time in its history. “We are delighted to be able to hold the 150th anniversary match in the parish and grateful to the Fords for their support,” Rowan commented.

After 23 years as honorary secretary, he is well aware of how important the ploughing match is to the wider community as well as to the farming fraternity, and he stressed that the society worked hard to bring in new classes and categories that kept the event relevant and reflected changes in the industry.

While still focusing on ploughing, the match is also an agricultural show in the broader sense, with classes for beef and dairy cattle and for sheep, as well as related skills such as hedge laying and hedge cutting.

For competitors in many of the classes, the match itself is less relevant – except as the opportunity for a great day out – as on-farm judging takes place throughout the year. The competition season starts with leys in April and May and goes through to silage clamps in December.

There are classes for cereal crops, sheep flocks, dairy herds and ‘best farmed farms’ large and small, as well as a number of conservation classes. New for this year are classes for farm diversification and the best small vineyard.

“We always aim to keep the match evolving so it reflects an overall picture of where agriculture is now and where it is evolving to meet new challenges. While the match continues to highlight the skills of ploughmen and women of all ages, the competitions that take place throughout the year showcase the industry as a whole,” said Rowan.
“It’s a chance for farmers and families to show off their skills and their work over the past year, whether they are farming 20 acres or 2,000.”

It adds up to a huge challenge for the hard-working committee and particularly for the many judges who devote their time to the continuing success of this vital part of rural life. While the list of challenge cups on pages three and four of the schedule runs to 75, the complete list of classes ploughs on to 131 and includes a number for young people.

Alongside the likes of cooking, handicraft and photography for four year-olds upwards there are popular lamb and calf handling classes for youngsters keen to show off their skills.

And if that wasn’t enough, the ploughing match itself includes more competitive events in the shape of terrier racing, an open clay shooting competition, ferret racing and a tug-of-war.

Other events that will add to the fun include a parade of hounds by the Crawley & Horsham Hunt, a steam ploughing display, poultry displays, a gun dog demonstration and scurry, birds of prey and falconry display, a licensed bar and plenty of food stalls. The Harris’ Brothers traditional fun fair will be yet another attraction on a packed day.
At the heart of the event, of course, will be the ploughing match itself, with classes for conventional, reversible, premier reversible and vintage ploughs as well as dealer and manufacturer-based trophies for Case IH/David Brown, John Deere, New Holland/Ford, Fordson and Fergie machines. The Charles Lambert Challenge Cup will again be presented to the winner of the Best Open Horse Ploughing class.

The match will feature machines ranging from 15bhp to several hundred, while manufacturers will show off their latest equipment on the showground’s demonstration plots. A bumper crop of trade stands is also expected this year.

Two special awards will also be presented at this year’s annual dinner at the Steyning Centre on Saturday 9 October, one for Long Service to the Countryside and the other a Young Farmers’ Special Award, which is new for 2021.

“Our aim is to provide an affordable, enjoyable day of entertainment as well as hopefully providing some education in the different aspects of farming and rural life,” said Rowan. “Classes and demonstrations like hedge laying and horse-drawn ploughing draw big crowds, and the evolving nature of the show means it links to the future as well as the past.”

The society has close links with Brinsbury college, which supports the match in return, as well as with local schools, supporting projects and initiatives and offering farm visits and talks to local youngsters.

The show has carved itself a vital place in the community and regularly supports local and national charities as well as helping Brinsbury College students on different initiatives. Recent donations have helped The Butterfly Project in Horsham, Sussex Air Ambulance, the Royal Agricultural Benevolent Institution (RABI) and dementia support charities.

About ten years ago, the society introduced a bursary which has supported a range of mainly younger people looking to develop careers in agriculture. Successful applicants have been helped with attending college courses, studying dairy farm management abroad, attending a dairy management academy and forestry handling equipment training.

“The awards are made at the discretion of the society but we give what we can each year,” said Rowan. “A few years ago, we helped a young lad who was facing some difficulties at school. He was helped by one of our society members and we then supported him on a land-based course at Plumpton College.

“He really benefited from the course and from some mentoring from our members and has gone from strength to strength. He also gave a passionate report back to members. He is a great example of the community support provided by this vital, 150 year-old institution.”