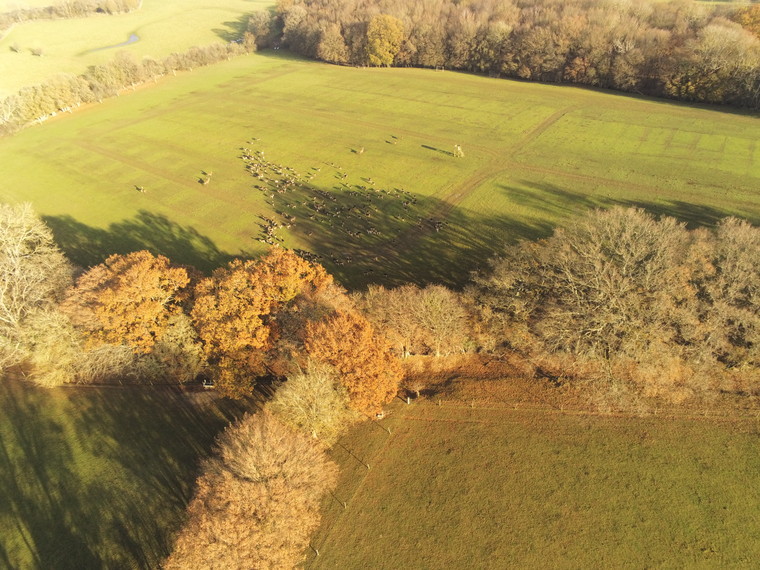 I met Paul Smith and his wife Yvette at Court Lodge Farm, located just off the Etchingham Road on the outskirts of Burwash.

The 95-acre mainly grassland farm is home to their two businesses; Wealden Game Farm – a well-established and successful pheasant rearing operation – and Wealden Game, a venison enterprise set up more recently after the couple bought the farm in 2018.

In addition to game, Paul keeps a small herd of 30 Pedigree Sussex cows, which he says are more of a hobby “as they make no money”.

The main enterprise is the “pheasant job,” he said. It’s a business that has grown significantly over the 12 years since he founded it. On average Paul and Yvette now rear and supply around 225,000 game birds to customers in the South East (Sussex, Kent and Surrey) along with a few high-profile estates in Yorkshire and Dorset.

Before starting the business, Paul spent 25 years working in the game industry, firstly as an under keeper in the late 1980s and then going on to be head keeper and shoot manager on a number of prestigious shooting estates. He learned the trade from egg production through to incubation, rearing and release.

With a wealth of experience and knowledge under his belt, he set up Wealden Game Farm in his late thirties. This turned out to be a shrewd move. According to the Game Farmers’ Association, more than 60 million birds are bred for shooting each year on Britain’s 300 game farms, in an industry that is worth more than £2bn annually.

With good connections, Paul soon had customers knocking on his door to order pheasants. He rented land locally to set up his rearing field, erecting brooding sheds where the birds are initially kept inside before being given access to the outdoors in netted pens.

“It’s a very seasonal job, which typically starts in April and finishes by early August. All pheasant orders for the coming season are taken by February,” he said. Eggs are then bought and hatched in a specific hatchery in Cambridge.

In mid-April his team starts the job of setting up the rearing field, a military-like operation that involves erecting dozens of brooding sheds and netted pens. It’s an impressive operation that when fully built covers 15 acres.

The first batch of day-old chicks arrives at the end of April and it takes on average between six and a half to seven weeks to rear the poults, explained Paul.

Looking after the birds is a highly labour intensive, 24/7 job, with Paul, Yvette and a team of staff working long days to keep them fed and watered.

In July they start delivering the pheasant poults to customers in three specialist trailers, each of which can carry up to 3,000 birds.

When they finish, the whole rearing field is taken down, disinfected and packed away. It is then re-seeded and a different field selected for the following year. This helps prevent any chance of disease.

I asked Paul how they managed with Covid-19 restrictions last year, when many shoots were unable to go ahead.

“We went into February 2020 with a full order book, wondering how we were going to cope with the orders. We were having to turn some people away. Then a month later we were down 40%,” he replied.

He explained they had no choice but to keep the business running. They kept all their staff employed and ultimately worked the year “for nothing” he said.

“On the flip side, it didn’t affect the sucklers and the venison sales were up as a lot of people were cooking at home,” he added.

When they bought Court Lodge Farm in 2018, Paul and Yvette saw an opportunity to start a second business – Wealden Game – dedicated to venison.

To begin with they created their own deer park: “We decided to have a deer park because we had a lot of grass and there is more money in the venison job,” said Paul.

They set about fencing the perimeter of the farm with six-foot deer wire and sourced Swedish fallow deer from Gunton Park in Norfolk. The herd has since grown to around 280 fallow, “with a few reds, which are too heavy for the clay soil and can be a little too aggressive on the red stag rut,” he said.

“In terms of labour requirement there’s very little to do; they faun themselves and feed themselves,” he said.

He added that they do walk the fence every day and have recently started supplementary feeding, now the grass has stopped growing. They also bring the Sussex cows in early in the autumn to help protect grass cover.

Culling fallow in the park begins in September with the males first and then, from 1 November, the females. They are culled from around 18 months of age, he explained, with numbers typically around 100 each year.

Everything is hung and processed onsite in their farm butchery and processing unit, located in a converted ex-dairy building.

Another key part of the business is managing other estates. They employ three staff, two of whom are full-time stalkers.

“With a rapidly growing population, wild deer are a big problem, but it’s a problem we’ve made a business out of helping to solve. Many people treat them as a hindrance, but we want to educate farmers and landowners that they can make some money back from them,” he said.

Paul has different arrangements with landowners: “On some estates we pay for the right to cull the deer and on others they pay us for dealing with what they see as a problem,” he said.

They shoot around 150 wild deer a year. Again, everything is processed through their butchery and sold to their wholesale and retail customers.

“Every animal we cull is tagged and inspected; we know where it was shot and when it was shot. We know the sex of it, the weight of it – all that information is collected,” he explained.

His own stalkers shoot around 95% of the deer in the wild but they do take paying guests with them.

“If we’re paying for an estate, to offset the payment we’ll bring some clients in. We might have some Danes come over and that final 5% helps pay for the Land Rovers and the buggies,” he said.

In total they currently manage around 4,000 acres, mainly in the South East, but they are always looking for more, with Paul encouraging anyone who might have a suitable estate to get in touch to talk about the options.

“We can offer deer impact assessments for woodland grant schemes and work in association with local forestry companies and the AONB authorities”, he said.

I was interested to hear Paul’s take on the rapid rise in the UK deer population, which is estimated to total around two million and increases 30% a year.

“A lot of recreational stalkers don’t have an outlet,” he said. “When the game dealers stop taking venison, the culling stops. We’re lucky that we have our own outlets, we have our own butchery and chilling facilities – so we’ve carried on.”

Without indigenous predators, the role falls to humans to keep the population viable and protect habitats from being destroyed, along with farm crops.

He is proud of the venison they supply: “It’s a great product – it’s naturally free range and very healthy, providing more protein and less fat than other red meats,” he commented.

They also only pick the best animals, he said: “We’re not a plumber or a builder going out on a Saturday. We are out every day, so we’re on the ground all the time.”

I ask if there is any difference between the deer shot in the park and the ones in the wild.

“Not in terms of taste,” he replied. “The main difference is weight – we are able to keep a continuous product in the park, whereas the wild stuff depends on what we can shoot.”

They sell all their venison direct, supplying both wholesale and retail customers under the Wealden Game brand. Their modern website www.wealdengame.co.uk has an online shop, allowing customers to order a variety of individual cuts, burgers and sausages as well as venison boxes. The business supplies a number of high-end restaurants in the area.

The site also caters for farmers and landowners interested in deer management, with a page outlining the range of services on offer.

Passion for hunting and future plans

Paul has hunted all over the world, he said, and is often in Germany, where he sat his Jagdschein, a degree in hunting, two years ago. It normally takes two to three years, he said, but he took a two-week crash course and is one of a few Englishmen to hold the qualification.

I asked what aspect of the game businesses he enjoyed the most.

“I enjoy it all, though sometimes when you’re spending 18-hour days with the pheasants you wonder why – it’s tough. When it’s pouring down with rain every day and you’re in a quagmire like this year. But that’s farming and you have to get on with it. We’re in the lap of the Gods when it comes to the weather. You enjoy it when it’s sunny,” he replied.

On plans for the future, he said they would like to expand the venison operation and hope to buy another farm locally to replicate what they’ve done at Court Lodge Farm.