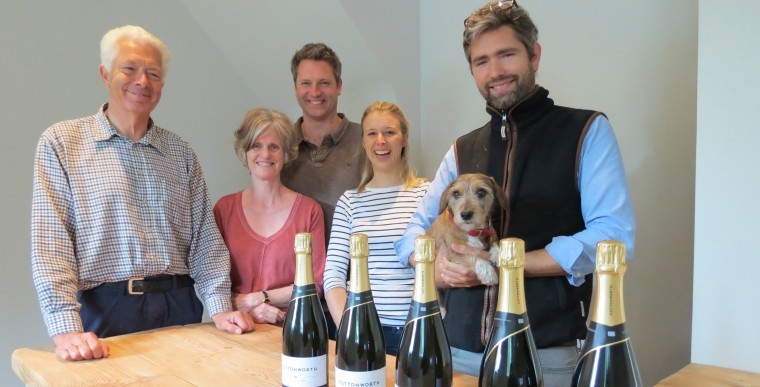 When James Liddell took over Cottonworth Farm in Hampshire from his family, there was a dairy herd and about 800 acres of arable crops.

Since then, the dairy herd has gone and Mr Liddell has handed the arable operation over to his son Tom. His other son Hugh runs a vineyard at Cottonworth, which makes award winning English sparkling wine.

James Liddell converted the farm to organic crops, and Tom Liddell has continued with his father’s preference.

“This was not the place to run a dairy herd between the Anton and Test rivers,” James Liddell explained. “New restrictions were coming in and we had nightmares about slurry seeping into the Test. A new facility would have been needed at the top of the hill, so we decided to take the money, and run.

“I decided to go organic because, firstly, I was the youngest member of staff then and we were all getting a bit long in the tooth! And, secondly, organic is much simpler with less work and risk. I just preferred it, too.” Today, Cottonworth is just over 1,000 acres, of which 700 acres is arable, about 150 acres is permanent grassland and the vineyard is about 30 acres.

Weed control on the arable acres at Cottonworth is done by ensuring the rotation is right, planting crops which are stronger than others, having a good fertility building ley and doing some roguing. “We have introduced a new one year fertility building crop of oats and vetch,” Tom Liddell explained. “That grows very fast and smothers a lot of weeds. We top it about now (towards the end of June) and that should kill off a lot of weeds which would have gone to seed.” Learning to live with a certain amount of weeds is part of organic arable farming: if the weeds reach a point where they affect yields and the operation is becoming uncommercial, then a rethink may be needed.

“Our only big weed problem is probably wild oats, because they are difficult to muscle out of a crop.” Roguing – or hand weeding – rye is very difficult when the crop grows five to seven feet high. “But we do try to rogue the oats, barley and spelt wheat if we can.”

Tom Liddell pays a company to bring in a team of workers to do the roguing. “They are very good, but they cost money and you have to weigh it up. If you go into a field and it’s full of wild oats, you know the team of people will be there for a week and it could cost between £2,000 and £3.000. Then you think ‘I’m not going to make £2,000 to £3,000 from this field, so what’s the point?’ So the clean fields we keep clean and the filthy fields we leave and have to think about them another day.”

With virtually no fertiliser spreading or spraying, the organic arable crops have proved much less labour intensive than conventional crops.