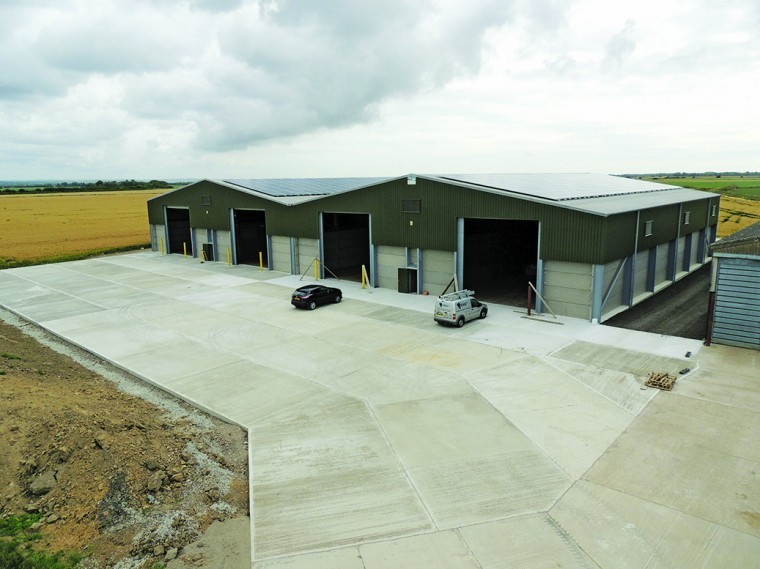 With 3,000 acres of combinable crops to store – and a long-term view of farming and the family business – Martin Clifton turned to Robinson Structures for the 6,000 tonne grain store he needed.

Martin, whose son Adrian is now managing director of the family business Martin Clifton Ltd, invested in the new double span store as the simplest way to tackle a number of issues.

“Two of our farms only had ventilated bin stores that were well past their sell-by date and we had taken on a new farm which had no grain storage at all, so I knew we were going to have to do something,” he said.

“We stopped growing potatoes three years ago and we toyed with the idea of converting potato stores to hold grain, but decided it was better to do the job properly – and we are delighted with the result.

“We also have 2,000 tonnes of storage in the Weald Granary, and although that was a great option at the time and the business has looked after us very professionally, I decided it would make good sense to consolidate all our storage here at Priory Lands Farm, Appledore.”

Priory Lands Farm is the headquarters of a business that covers seven or eight different farms, with roughly half the 3,000 acres tenanted and the rest owned by the business. It is an impressive holding that Martin and Adrian have grown since the early days when grandfather Dennis moved from Lincolnshire to farm Court Lodge, Appledore, in 1945.

Martin was five at the time and after playing his part in taking things forward he wants to make sure that things are in good order for the future – including providing enough storage.

“These days farmers have to justify the amount of storage they need to the planners, but they tend to think in terms of current output. I have seen yields grow steadily over the years and that trend is bound to continue,” he explained.

“We have already had a new record set in East Anglia this year, with more than 15 tonnes a hectare being logged, and who knows what kind of figures my grandchildren will be seeing?

“I wanted to make sure that we had enough on-farm storage to cope with the future, not just the present – and even now it’s a safe bet that they will turn around in 20 years time and ask why on earth I didn’t make it bigger.”

Martin sees moving away from bin stores as another sign of the times, with farms cutting back on manpower and looking for quicker and easier ways of doing things – including clearing out stores. “In the old days every farm had an Old Harry who was happy to sweep out a bin store, but no-one has an Old Harry any more,” he commented.

While the new grain store was designed to make life easier and more efficient for the business, it is also doing its bit for the environment, too, with state-of-the-art rainwater harvesting, solar PV panels and ultra-efficient drying systems all included in the build by Robinson Structures.

The drying floor and 150bhp centrifugal fan that supplies it were installed by Wellvent, and it was on that company’s recommendation that Martin Clifton Ltd approached Robinson to quote on the building.

“I have used Wellvent in the past and I have known Paul Gardener for many years,” said Martin. “I respect his opinion and so when he suggested looking at a Robinson building at St Nicholas at Court I was happy to do so – and pleased with what I saw.”
Robinson steered the building through the planning process in early December and had the building finished on time and on budget ready for this year’s harvest. “The timescale was tight but we kept on top of the project and had it finished and commissioned in good time,” explained Charlie Highton, the contract sales executive who looked after the early stages of the project for Robinson Structures.

He added that as the part of the process the company saved Martin Clifton Ltd a considerable sum by coming up with revised plans that provided the same amount of storage space in a more cost-effective building design.

“Our aim is always to deliver what the customer wants, and if we can help to achieve that in a cheaper way, or suggest a better way of doing things, that’s all part of the service,” he said.

There were no improvements left to suggest at Priory Lands Farm, with the grain store already designed to recycle rain water, turn sunlight into ‘free” energy and dry the crop as efficiently as possible.

The double span building houses four stores, with each of them accommodating six six-metre bays with 4m high internal walls. The building is 7m to the eaves to allow tipper access.

Robinson Structures designed the building with purlins strong enough to support the solar panels and brought in well-respected contractors Torran Construction to carry out the groundworks, lay the internal and external concrete floor slabs and install the drainage.

“We used Torran because we knew the high standard of their groundworks would match the high standard of our buildings and because we have good experience of working together successfully on many projects around Kent,” said Charlie.
Wellvent’s hardwood drying floor is built to a modern specification that benefits from the fact that grain stores are no longer swept by hand.

“The perforated zinc inserts that allow the warm air to reach the grain are set deeper in the wood because mechanical cleaning methods are now so much more efficient and mean they no longer get clogged up,” said Martin. “And the fact that they are set deeper means they are better protected from accidental damage.”

The gas-powered heating system is driven by two centrifugal fans that can each move 115,000 cubic feet of air per minute at five-inch water gauge. The fans are so efficient that Martin has since installed a similar model in an adjacent, existing grain store.

One advantage of the new system is that the fan automatically senses the amount of moisture remaining in the grain and reduces its power accordingly. Although the business has not yet been able to calculate the saving, Martin is certain that it will prove to be significant.

The solar panels on the roof – together with all the electrical work – were installed by Kingsnorth Electrical, a regular and well-trusted supplier to Martin Clifton Ltd. The 100 kW solar system adds to 300kW elsewhere and highlights the business’ green credentials as well as providing a good return on investment.

The family firm also hosts a wind farm on its land at Little Cheyne Court, and with water high on the list of resources that could come in for legislative attention in the future, the new building features a state-of-the-art syphonic gutter system.

This collects nearly all the water that lands on the building and channels it to seven large holding tanks, removing any flooding risk that might be caused by the building’s footprint. The water is then mixed with chemicals and used for the farm’s spraying operations.
“This reduces our need to abstract water for spraying, avoids any concerns that the building might contribute to local flooding and hopefully keeps us one step ahead of future legislation regarding agricultural water usage,” explained Martin. “On top of that we were given a grant from Natural England towards the cost.”

The new building provides a centralised delivery point for grain that has cut transportation costs and fuel usage as well as reducing the business’ carbon footprint.

“I think we have done as much as we can to streamline the business, support the environment and future proof our grain storage capacity for a good few years,” said Martin. “We are delighted with the building and with the support we received from those who worked on it.”