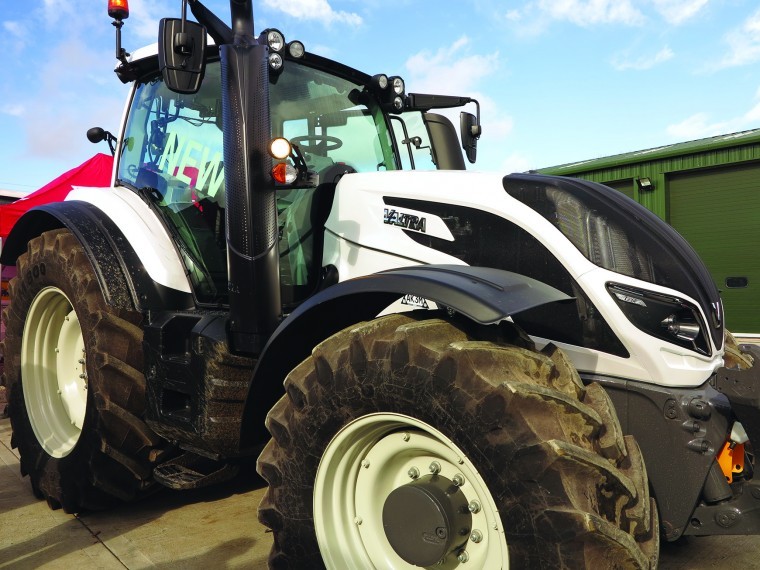 Existing customers, potential customers – and a few people who might become a customer now they have seen what the fuss is all about – joined the R W Crawford team in Charing, Kent, for a Valtra open day at the end of February.

The launch of the all-new T4 range has been turning heads across the industry and across Europe since it first appeared, and as the Valtra roadshow rolled into town it was clear that farmers and landowners across Kent and East Sussex were pretty excited about it.

While most ‘new’ tractors represent styling tweaks and a few other developments to an existing model, the T4 is new from the ground up.

The result is not just the new cab, which has been designed around what customers said they wanted, but a new engine and lots of refinements to a model. Visitors to the open day were quick to praise it as delivering a quality feel and flexible handling.

While Valtra may have a winner on their hands, that was not much good to local farmers without a dealer to buy it from, a gap that Crawfords filled shortly after moving into their new Kent depot in July 2013.

As visitor Joe Strand pointed out while checking out one of the new models, before Crawfords picked up the franchise after a gap of 12 years there wasn’t much point in getting too excited about the brand.

“We had a 165bhp Valtra that reached the end of its life four years ago and we would certainly have considered replacing it with another Valtra, but at that time there was no dealership in this part of the world,” said Joe, who farms at Burgess Farm, Whitstable and was at the open day with father Neil.

“We found the old Valtra incredibly reliable and with good pulling power and it’s great news that the brand is now available once again in this part of the world. We would certainly consider Valtra when we replace our 150bhp loading tractor. In my view they are incredibly reliable, simple but with everything you need to get the job done.”

Visitors were able to talk to one of the Valtra or Crawfords reps and test-drive one of a wide range of tractors available. As well as the T213V, T214D, T234V and S374 models supplied by Valtra – along with a 40ft long interactive exhibition trailer – Crawfords’ Valtra specialist James Robson made sure that he had half a dozen other models on display to highlight the broad focus of the 50 to 400bhp model range.

James Robson said he was hoping to see around 150 visitors during the day and said that Valtra had done a good job in raising awareness of the new model since its launch in Frankfurt, when it had received “rave reviews” in the agricultural press.
One visitor who was more impressed than he expected to be was farmer Dave Price, who confessed that although he normally favoured another brand, the T4 had opened his eyes to Valtra. “I really like this,” he said, as he sat in the cab of one of the demonstrators. “They seem to have really thought about the design and the switches and other controls have a good quality feel. I’m impressed.”

Another farmer who may be tempted to switch allegiance in the future is Harvey Sheffield, who runs an arable and turkey operation at Foords Farm in Heathfield. He also liked the build quality and was impressed that Valtra offered farmers who didn’t need all the high-tech gadgetry now built into today’s tractors the option of buying a simpler model if they chose that route.

“The kit is all available if you specify it, but if you just need a basic tractor for a smaller-scale operation then that option is available to you,” he said. “I would definitely consider Valtra in the future.

Also at the open day was specialist contractor Will Clarke, who last year bought the first new Valtra to be sold in Kent for 12 years – a Valtra T153D with CVT transmission that represented Crawford’s first sale of the new marque.

Back to look at the new T4 models, he said he had been absolutely delighted with the way the tractor had performed, describing it as “versatile, very reliable, user friendly and comfortable – and supported by great back up from Crawfords”.