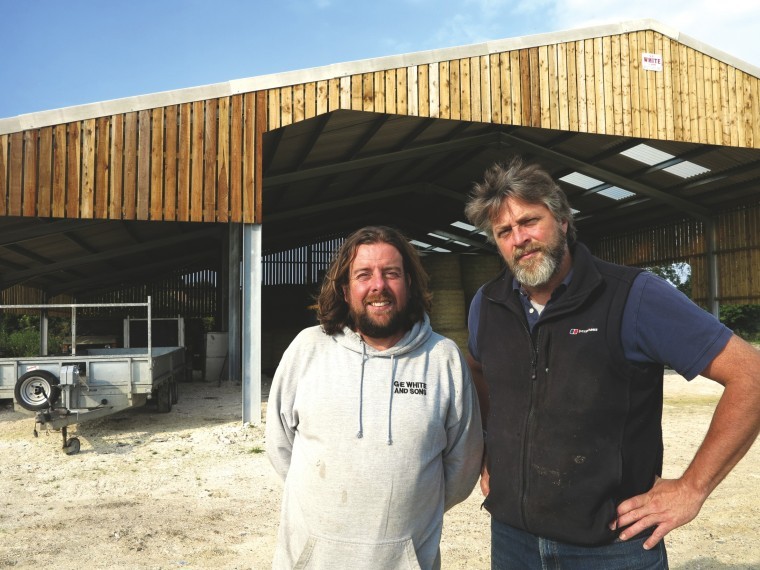 When Jason and Gary White set up G E White & Sons, they used their father’s name, in part because of the reputation he had developed for steel-framed agricultural buildings but more importantly because he had, in Gary’s words “taught us all we know about building”.

Earlier this summer, after 38 years working for another steel-framed building firm and at the age of 68, Geoff was finally persuaded to join his sons’ business, which has grown dramatically over the past nine years.

G E White & Sons now runs six vans and has a team of nine that erects steel-framed agricultural and industrial buildings across a wide part of the South East.

Increasingly the firm is being asked to tender for equestrian buildings, having developed a reputation for quality work and a flexible approach to meeting the customer’s needs.

One of those customers, international showjumper Shane Breen, said the company had done “a first class job” of erecting a new riding school together with adjacent stabling for eight horses, a tack room and wash down bay at Hickstead Place in West Sussex.

“They were very efficient, flexible, came up with some good ideas and delivered a hassle-free project,” said Shane, just back from Calgary where he picked up two second places and a third at the Spruce Meadows show.

“Our main business is still with agricultural buildings, but the equestrian world has started to hear about what we can deliver and so word of mouth is keeping us busy in this area, too,” said Gary.

The brothers, who work out of Lewes but tend to operate out of the back of a van using mobiles – “it helps us keep the costs down because we aren’t paying for expensive office space” – both learned their trade with the company that employed father Geoff before going it alone.

“We spent the past four years trying to persuade him to come and work for us but he stayed loyal to his employer,” explained Jason. “It’s good to finally be able to make good use of his skills and experience – he knows every aspect of the job.”

While they may not have a flashy office, the G E White & Sons team has developed a reputation for good customer service, as another client, Lord Rufus Albemarle of Hurst Barns Farm, East Chiltington, explained.

“I asked a number of companies to quote for a new hay store but the interesting thing about G E White & Sons is that I didn’t just get a quote in the post,” he recalled. “They came round to look at the site, talked to me about exactly what I wanted and what I was going to be doing with the building and then gave me some helpful advice about how to make best use of the space available.

“That human touch – together with the flexibility that they demonstrated as the job progressed – made a big difference. They clearly knew what they were doing, they had a hands-on approach to the project and they delivered a great service for a competitive price.”

The end result at Hurst Barns Farm is a 26m by 24m hay store with a 6m lean-to extension, built from galvanised steel with a fibre cement roof and Yorkshire boarding that was custom cut to allow flexible access from all sides of the building. The roof is designed to take solar PV panels if they are needed in the future.

At Hickstead Place, G E White & Sons is close to finishing the 48m by 24m riding school and adjacent stabling for Shane Breen, who runs Breen Equestrian and is married to Chloe, a director of nearby Hickstead showground. The company has been invited to tender for work there and already has a healthy-looking order book for the next six months or so.

The company has taken on the whole project at Hickstead Place, including the groundwork, and is cladding the riding school with herringbone boarding. “Because we are very ‘hands on’ we have been able to incorporate a number of changes as the project has gone on, which has highlighted our flexibility to the client,” Gary added.

The company benefits from a considerable amount of repeat work from satisfied customers and from word-of-mouth recommendations – increasingly from within equestrian circles.
The brothers also carry out repairs and refurbishments and aim, in Jason’s words, to be “reliable, competitive and friendly.”

G E White & Sons is also currently working on a cattle yard and dairy unit in Clacton, Essex. It is fully accredited to the latest standards and all buildings carry the CE marking required by recent legislation.