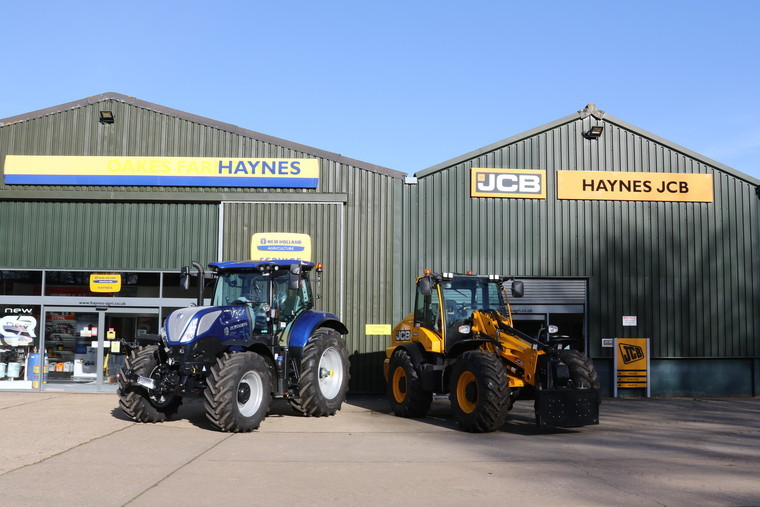 It’s usual for existing employees taken on by an expanding business to have an induction into the ways of the new company – these days probably via a half hour online group session.

What’s not so common – in fact probably unheard of – is for nearly every one of the 64 existing staff to be visited by the Chairman and CEO of the new business and welcomed into the bosom of the ‘family’ with a personal, one-to-one chat.

Unusual, perhaps, but just one example of the way Haynes Bros is determined to create a loyal and dedicated team that will continue to give outstanding service to its growing customer base.

What was particularly reassuring to the visiting CEO Andrew Haynes was that having met members of the former Oakes Bros staff in Winchester, Newbury and Horsham he discovered that every single one was “someone we would have taken on ourselves”.

That reassurance reflected what Andrew pointed out was a “natural affinity” between the two family businesses, both with long histories and both with a focus on delivering great customer service to local farmers.

For Haynes, taking on the Oakes Bros’ premises and franchises that had been up for sale for several years will allow the company to grow its presence to the south and west of the region. For the new employees it marks an end to uncertainty and a chance to play a vital part in a growing business with a focus on making the most of the opportunities facing farmers and farming.

The Haynes Group dates back to 1790, with Andrew the sixth generation of the family to take the helm, having joined in 1996 at the age of 30 after forging a successful career in international corporate communications and then working with Iveco, Ford and New Holland both in the UK and in the US to gain an understanding of their businesses.

Oakes Bros, which already shared franchises in the shape of JCB and New Holland, making it “a perfect fit” for Haynes, had nearly as long a pedigree, dating back 195 years.

While the synergies were obvious, Andrew and his senior management team – led by recently appointed Group Managing Director James Broadley and Agricultural Operations Director Adrian Woods – made certain the two teams were a perfect fit before agreeing the deal.

That team has been strengthened by the appointment of Richard Haines and Richard Crees, both former members of the Oakes Bros team, as Business Director West and Agricultural Divisional Finance Director, respectively.

Andrew is keen that the whole of the Haynes business – now 340 strong and based on 10 sites across Kent, Surrey, Sussex and Hampshire – shares the same underlying philosophy of unbeatable customer service based on innovation, solid values and long-term relationships.

It is the focus on innovation that was one of the driving forces behind the acquisition, with Adrian Woods believing that the future of agriculture will depend on the kind of technology that can only be supported by larger dealers across a larger territory.

“Scale will become increasingly important as farming continues to change following the removal of basic payments and the increasing focus on environmental schemes,” he explained.

“In essence, farmers will be asked to achieve the same level of productivity while taking an area the size of Rutland out of productive agricultural use each year for the next 30 years to meet the government’s target of planting up to 1.5 million hectares of trees. That will only happen with technology and Haynes will be here to support that technology.”

Adrian believes dealers will build on their existing offer of machinery sales, parts and servicing to offer precision farming advice, going well beyond the current baseline of supplying GPS-equipped tractors to provide detailed, high-spec analysis and planning services that will allow farmers to optimise their production and maximise their profits.

The company will deliver that support through the new Haynes Technology Hub that is being set up to future-proof the company’s offer to farmers who want to make the most of the sophisticated equipment available now and on the horizon.

“The hub will be looking to take on bright people with skills in IT and computer sciences and a determination to help meet the challenges of modern-day farming,” Adrian explained. “They will work in partnership with agronomists and software experts to give 21st century farmers the mapping and programming tools they need.”

Mapping technology is also being used increasingly by vineyards, of which there is a growing number in the South East. “It’s possible to plot every plant in the vineyard and treat individual vines to maximise productivity,” said Adrian.

As well as setting up the hub, Haynes’ first significant investment in this area will be to network its seven RTK (Real Time Kinematics) base stations using specialist software that will allow remote guidance diagnostics, seamless licence updates and hassle-free roaming.

“It’s clear that businesses can only provide this level of service if they are large enough to support this kind of investment, and adding the new dealerships to the west has helped Haynes achieve the right scale to take on the complex work involved,” said Adrian.

“It also makes better use of our specialist teams such as our human resources department, perhaps unusual for an agricultural dealer but a vital part of our staff-focused philosophy and now a cost that is spread across a wider base.”

The HR team provides a range of services to the Haynes’ staff, going “the extra mile” to support those in need of help and providing counselling alongside the usual personnel functions.

It’s helped ensure the Haynes team remains “one big family” in the words of Andrew Haynes, with a number of long-serving staff still on the books. Currently at the top of the long-serving leadership board is Jeremy Cloude, an agricultural salesman who joined the company as an apprentice an impressive 53 years ago.

“We have an important line in our budget for gold watches!” joked James Broadley, who joined the company in April 2019 as Finance and Commercial Director and took over from Andrew as Group Managing Director in 2021.

While growth is part of the Haynes philosophy and has created new opportunities with the Oakes acquisition, Andrew and the senior management team are clear that the aim is to be “not the biggest, but the best”, with expansion only considered when “sensible and opportune”.

“This is one of those opportunities,” James explained. “As well as giving us the scale that supports our technology ambitions, we have a huge opportunity to develop our offering in the Hampshire, Berkshire, Wiltshire and West Sussex areas served by our new dealerships in Winchester, Newbury and Horsham.”

As an example, James pointed out that the established Haynes dealerships typically exceed their New Holland tractor market share objective, whereas the new branches to the west currently achieve a share some way behind their objective.

“The disparity is due in part to an unusually high market share in our established business resulting from diversification into niche agricultural markets, which we look forward to expanding into the western region,” he said.

“It is also down to issues in the Oakes business due to a lack of investment while the business was up for sale and partly because farmers were unsure of its future. The potential for growth in that area, particularly given the enthusiasm and commitment of the people we have taken on, is tremendous.

“We want to help our new colleagues in the west achieve the potential they have already demonstrated to us by giving them the support they need and investing in the buildings and the infrastructure. At the same time, we want to develop new, long-term relationships with farmers and growers in that part of the world, backing up great deals with unbeatable after-sales service.

“The Haynes way has always been to grow our customer base sustainably, building relationships for the future rather than chasing short-term goals.”

With the Haynes Group also selling Ford cars and Fiat and Iveco trucks, Haynes Agricultural supplies, services and repairs New Holland and JCB machinery from dealerships in Great Chart, near Ashford in Kent, Uckfield in East Sussex, and Wrotham in Kent, as well as from the three new westerly locations. Haynes Agritec operates a Case IH franchise from Birchington in Kent.

The company sells 600 new and used tractors, combine harvesters and telehandlers a year, along with 1,400 farm implements. Group-wide it has around 2,000 account customers and an impressive customer database that includes councils, emergency services, the National Trust and UK Power Networks.
At the same time, it prides itself on giving personal service to all its customers, particularly those in the farming world. “We are dealing with a lot of customers and a lot of franchises, but we still go out of our way to make customers feel special and we choose our employees with that in mind,” said Adrian Woods.

Haynes’ objectives include providing “outstanding levels of service and value”, creating a good working atmosphere for staff and attracting and retaining the best talent around – something that is very much to the fore with the development of the technology hub. Training is vital to the way the business operates, helps set the culture within the business and promotes the use of best practice.

The company’s focus on delivering the best possible service has seen it pick up dozens of awards along the way, the most recent being New Holland Tractor Dealer of the Year 2020.

The focus now will be on investing in the westerly branches, with an initial focus on Newbury. Winchester and Horsham are longer-term projects, but the aim will be to provide much better facilities for farmers in those parts of the territory.

“Launch celebrations will happen in due course, but for now we are focusing on getting things up and running and making life easier for the teams,” Adrian explained.

Early improvements have included changing the signage on the buildings, vans and clothing and a big investment in IT infrastructure which has led to improved communications with customers and better diagnostic equipment in the workshops. Haynes has already invested £100,000 in IT alone, including adding high-tech Wi-Fi hotspots in technicians’ vans. “Before, they had to tether their laptops to their mobiles,” Adrian pointed out.

“As with HR, we are a big enough player now to support our own IT department, which is vital these days. IT improvements have already made a big difference; we have a happier team and that means happier customers.”

That happier team could still grow as Haynes develops its offering to the west of the region. “We are looking to recruit and will carve out the right role for the right people,” said Adrian. “Our aim is to double the turnover of our agricultural division following the acquisition of Oakes Bros and key to this will be the expansion of our fruit and vineyard business. There is lots of scope to join the team and help us continue to deliver a great service to farmers across the South East.”