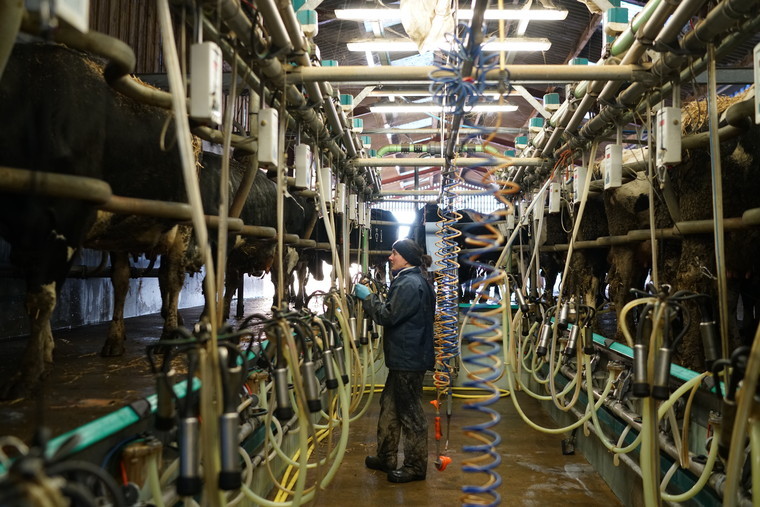 I meet John Farnes, his son Ralph and daughter Sarah at Downsview Farm, their 140-acre holding, located down a short driveway off the B2192. The family bought Downsview in 2004 and after gaining planning permission put up an impressive 160ft x 120 ft modern barn with central feed passage in which they house their milking herd during the winter.

Adjacent to the main barn is a 20ft x 20ft milking parlour, where the cows are milked twice a day, and their processing rooms where they pasteurise their milk and turn it into a range of products including their award-winning ice cream.

Their diversification journey began just over ten years ago when John came across a small dairy farmer in the Cumbrian hills while on a trip to see his other son Mark who was living in Scotland at the time.

The farmer told him that during the summer months he was able to make a living processing the milk from his nine dairy cows into ice cream – selling it direct to holiday makers. A light bulb turned on in John’s head.

On his return to the farm in October, he set Sarah the task of setting up their own ice cream brand and processing facilities from scratch, with the aim of being up and running by Easter.

Impressively they managed to start selling it to local shops in May 2011. “I wasn’t too far behind, was I?” said Sarah, laughing.

John, aged 89, is still actively involved in the farm and explained how he started the business over 50 years ago with the help of his wife Gillian.

With no farm and little capital of his own, John’s father Charles spotted a milk round up for sale and suggested he buy it. He lent his son the money and John became a milkman, buying milk from John Brown’s dairy and delivering to homes in his local area.

It wasn’t long before he bought another round and his business was going well. Then an opportunity arose to buy a timber-framed bungalow with two acres of land for £750. His mother lent him the money to buy it. He then started renting land locally, bought a few milking cows of his own and put up a shed.

Then after a chance conversation with a local dairy farmer, he was offered a farm with 70 acres and a herd of Jerseys to contract farm. Over the years he bought all the livestock from the owner, and after about 15 years was able to buy the farm.

Over the years John and his wife moved from farm to farm before settling at Upper Lodge Farm, a 105-acre holding in Ringmer which they bought in 1991. By this time both Ralph and Sarah had moved out and they were both driving lorries for a living.

Then, in 1997, Ralph returned to the farm to help John with the cows and rearing calves. Then two years later, around the same time as the farm ‘office work’ began going more computer based, Sarah joined the business too, selling her house in Hailsham and putting the proceeds into the farm.

Between them they dragged John into the 21st century and have gradually evolved the family business ever since.

The secret behind their delicious rich milk is their herd of British Friesian cows managed by Ralph and his partner Kate, who is employed by the farm and is responsible for much of the day-to-day milking.

The cows spend most of the year out rotational grazing the 140 acres of pasture at Downsview, coming in to the barn for winter housing during the wettest months.

Where John previously ran a flying herd, Ralph has been instrumental in moving to a closed herd, breeding his own British Friesian replacements – with the aim of improving the genetics. He added, though, that they still had a small number of Jersey and Montbelliard cows.

All breeding is carried out by two pedigree Friesian bulls and a young Angus, a recent acquisition – purchased to provide a better dairy beef cross. There are no set calving blocks as they need to keep a consistent yield of milk all year round, explained Ralph.

All the calves are reared at Upper Lodge farm, two miles up the road. Bull calves are taken to around five to six months and sold at Hailsham Market.

They grow all their own silage and maize, which is fed to their cows via a mixer wagon during the winter months. Most of the tractor work on farm is carried out by their part-time driver Martin Pratt.

With the fluctuations in the price of milk paid by the processors, John’s idea of producing their own ice cream has proved a savvy one.

It took Sarah around eight months to turn his idea into reality, launching Downsview Farmhouse Ice Cream in May 2011.

They built a processing room from scratch and spotted a Farmers’ Weekly advertisement for an ice cream franchise called The Farmhouse based in Holland.

Signing up, the company duly sent over the pasteuriser and ice cream machines along with everything they’d need to get up and running.

“A guy came over to set it up and showed us how to make a strawberry sorbet and a hazelnut ice cream and said: ‘That’s it.’ We said ‘Really?’ He replied: ‘See you later and here’s the book’.”

It was a “steep learning curve,” said Sarah, but they followed the recipe and it started working. They began selling their ice cream to local shops and were pleased as sales started to grow.

For the first couple of years, they focused on ice cream. John separated the cream from the milk, which was then ‘chucked away’. Realising this was an unnecessary waste, they asked their customers if they’d be prepared to take their milk too. They said yes and Sarah spoke to the franchise company, which sold them a tap to fit to their existing machine, allowing them to start producing their own pasteurised milk for sale.

Initially their milk processor Jonathan Melia spent two days a week heating up and cooling down 12-litre batches of milk. As demand grew, it became apparent that the machine couldn’t keep pace. They decided to buy a new pasteuriser and separator, moving milk processing into its own room. They increased milk processing to three days a week, which they continue to do now.

Around the same time, they decided to move away from the franchise company altogether.

“We decided their pots weren’t quite right. We sorted out our own branded pots,” explained Sarah.

Since then, they have upgraded their equipment and expanded their range of products from ice cream and milk to include yoghurt, butter and cream.

To date most of their marketing has been via word-of-mouth, though they do have Facebook and Instagram accounts, sharing recipes and updates from the farm. They also have a website (www.downsviewfarm.co.uk) which was set up back when they launched, but they have plans to refresh it soon, said Sarah.

The majority of their products are sold to loyal retail customers and delivered daily via their fleet of four vans. They also supply four-litre catering tubs of ice cream to restaurants, which is great for volume and helps build brand awareness, with chefs keen to highlight their locally sourced produce on the menu.

Over the year they have received a number of awards and were the proud winners of the Best Family-Run Dairy Farm and Leading Providers of High-Quality Ice Cream awards in the 2021 Food and Drink awards.

I ask what flavours are their best sellers, to which Sarah replied: “Vanilla, followed by chocolate and then honeycomb.”

They also offer a range of more exotic flavours and have plans to introduce a new style of gelato ice cream to supply restaurants before making it available in smaller tubs. Watch this space.

Talking to Sarah and Ralph, it’s clear they are still recovering from the impact of Covid-19. During the various lockdowns, orders to restaurants and cafés “fell off a cliff” and still haven’t recovered to pre-pandemic levels.

They also took a hit on the wholesale price of their milk and were paid just eight pence a litre, although that has thankfully since recovered to a profitable level. Sarah added that the ice cream and processed milk had been supporting the farm for a number of years.

With the stronger milk price, Ralph and John are in the process of increasing the herd size, which should be closer to 200 cows by the end of the year, with the aim of upping milk production.

Inspired by a trip to see a vending machine on a dairy farm in Peterborough, the business is planning to get one. Services and a concrete pad have already been installed at the end of their farm drive, which is ideally situated on the busy Laughton road.

The vending machine will enable them to sell direct from the farm gate and will include flavoured milkshakes, a popular drink amongst the younger generation.

In the longer term they’d love to have their own farm shop too, she said. “Dad’s always said ‘let people come to you, don’t run after it, that’s when you make money’,” she added.

Farming is a way of life

I ask John what he loves about farming.

“It’s not the money,” he replied quickly. He added: “I was born and bred into it.”

Sarah said she enjoys looking out over the farm from her window, where previously she looked out onto other people’s gardens.

They all work 12 to 14 hour days. “It’s a way of life,” said Ralph. Thankfully all their innovation and hard work is paying off and between them they’ve managed to build a sustainable family business and a fun place to work. As I was leaving the yard, they told me they were all headed out on a works do – ice skating!