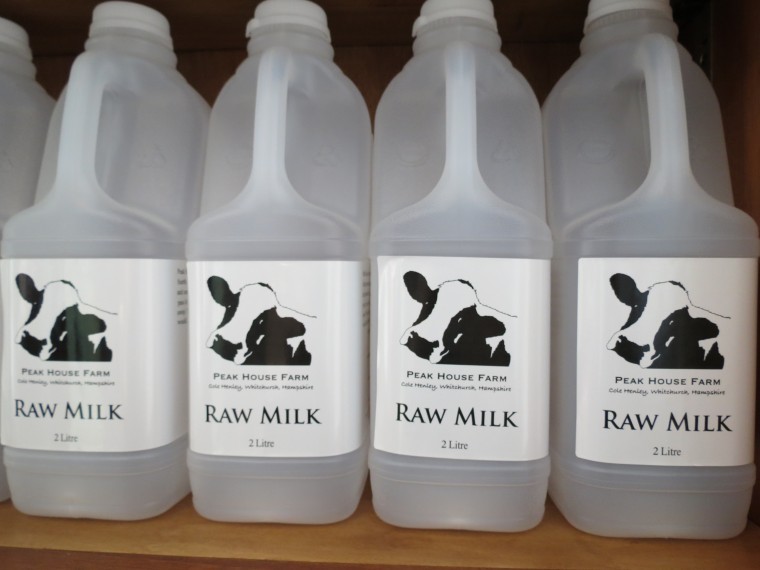 Everyone selling raw milk – which is not pasteurised or homogenised – has to be inspected and tested quarterly by the Food Standards Agency (FSA).

“It is a very stringent test, and rightfully so,” said Mark Stevens. “At the initial inspection, they check the premises and the dairy parlour to establish what your milking routine is. Then they take a sample of milk for testing.”

Before the FSA came, the Stevens had been visited by Jonny and Dulcie Crickmore from Fen Farm Dairy in Suffolk – which was already producing raw milk. They had said that the dairy was very clean and could be used for raw milk production. “We didn’t have to do much apart from slightly altering the milking and washing routine,” said Will Stevens. “It costs slightly more, but we had always been in the top band for the milk tests which Arla do.” On the bactoscan, which measures the number of individual bacteria, the result has always been less than 50.

“Happy cows produce good milk,” Jenny Stevens said. “They are not stressed and they are not really high yielding cows. That in itself is important for producing good quality milk and keeping your animals healthy.” The boys’ animal husbandry is superb, too. “I would sleep on William’s calf beds because they are so clean,” Mrs Stevens added. “They look after the animals to the best of their abilities with the amount of money we have available.”

The Stevens have just had their second FSA test, when a milk sample was collected and an email received telling them the farm had passed. “The FSA has been very encouraging,” Mr Stevens said.

Raw milk is dispensed from a vending machine which customers use to fill their own containers or a glass or free plastic bottle from the farm. Milk is supplied from the bulk tank, with Arla picking up whatever is left at the end of the day to be pasteurised and homogenised. Milk in the Italian vending machine is never more than 36 hours old. “It surprised us how many people are actively looking for raw milk and have been for a number of years,” Mr Stevens said. An average of 80 litres is sold each day at £1 a litre: this comes out of the total 2,500 litres of milk produced on the farm each day. In the four months since the raw milk began, it has increased the Stevens’ milk price for all milk produced by 2.5 pence per litre – so it is probably keeping the farm viable.
The business is still getting known, so publicity, attending Christmas markets and customer feedback are all important. There is a carousel next to the vending machine which sells glass bottles, eggs from the farm, cream and honey – which helps bring in people for the milk.