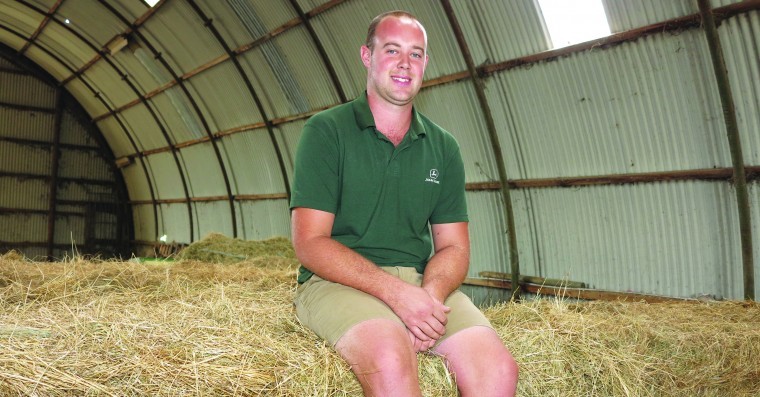 New ideas in farming generally help either the producer – by cutting costs or making life easier – or the customer, by giving him or her a better deal.

Occasionally something comes along that does both, providing a major leap forward for both parties and revolutionising the industry.

While it may be an exaggeration to describe the Bale Baron as revolutionary, this remarkable piece of equipment has certainly made life easier for contractor Jamie Loveridge, as well as allowing him to give his customers exactly what they want.
“Livery yards and other equestrian users want their hay and straw in small bales so that they can move them around easily, but they don’t want the hassle of stacking hundreds of individual bales or splitting larger bales,” he explained.

“The Bale Baron ties 21 small bales in one large stack which is easy to move by forklift but can be cut when the customer wants to access the individual bales.”

Jamie, whose company J C Loveridge Agricultural Contractors Ltd operates out of Cliffe in north Kent, has invested a not-insignificant £70,000 in making life easier for his equestrian customers by buying a new Bale Baron 4240T.

But it’s not a completely selfless gesture. “It has made life much easier for me, too,” he explained. “It now takes 15 to 20 minutes and a forklift to load a trailer with bales instead of taking three to four hours and three or four men to shift the same amount.”

J C Loveridge supplies hay and straw to customers within a 30-mile radius, as well as offering fencing and round baling and hay making.

Jamie also carries out groundworks for Higher Level environmental schemes for his landlords, the RSPB, creating scrapes, rills and bunding to enhance wader habitat on the conservation charity’s marshland reserves.

For Jamie, who was born locally, working on environmental schemes in the area he grew up in is a privilege as well as helping to pay the bills.

“We moved here when I was five and so I have always lived in this area and have no intention of moving away,” he said. Jamie’s father Keith, who farms Bromhey Farm, Cooling and Rye Street Farm in Cliffe, found him his first job, topping for the RSPB at the age of 16, and his entrepreneurial spirit took over from that point.

With support from Keith and his mother Jackie, Jamie steadily developed the contracting business, working with his father on occasions but not for him. “We tend to think differently so we do our own thing but help each other out,” he explained.

Still only 24, Jamie now runs three tractors, a Case Maxxum 130 CVX he uses for baling, a John Deere 7530 and an older 6900 which he describes as being “on light duties only”. When he bought the Bale Baron earlier this year he also replaced the baler, buying a Massey Ferguson 1839.

As well as being good for the majority of his customers, the new baling process has also saved Jamie the time he needs to supervise the other work the company does. “I like to take a pride in projects, particularly the fencing we do, and I couldn’t do that when it was taking me hours to stack large bales in the barn or load them on to a trailer,” he explained.

“Now the baling is so much simpler, and loading and delivering the bales so much quicker, I can confidently offer the kind of quality fencing that J C Loveridge specialises in and make sure I am around to supervise it.”
Jamie, supported by right hand man James Eadie, looks after about 500 acres of grassland across Kent, including land at Teynham, Paddock Wood, Cobham and the Isle of Sheppey. The Paddock Wood site is a private airstrip. “The owner keeps the runway short and we go in at a convenient time and cut the rest of the site for hay.”

While there can be a temptation for contractors to offer more and more services, Jamie prefers to retain his focus on grassland work, the environmental schemes and fencing. “It’s easy to get carried away, but I would rather stick to what we are good at and make sure we offer good service,” he commented.

The time involved would clearly be another factor, since Jamie also rents 500 acres at Great Bells Farm, Eastchurch, currently home to 85 head of suckler cattle and their calves. His three bulls are currently resting on the site at Cooling.