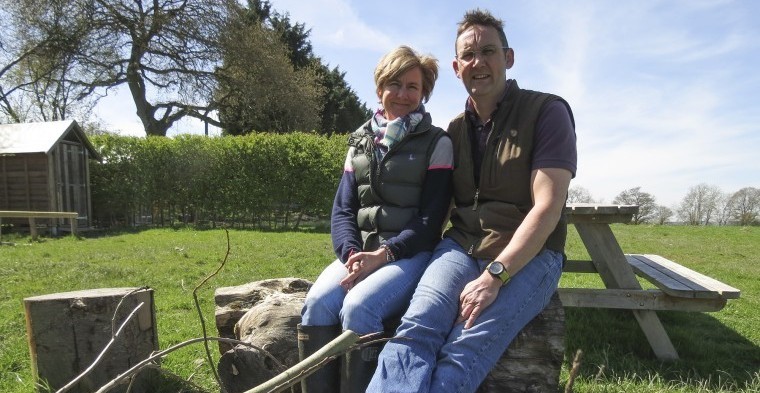 At the campsite on Manor Farm, Will and Anna Brock have families staying for more than 1,000 nights each year.

That equates to more than 300 families, each with an average of four members which works out at roughly 1,500 people a year. Of course, nearly every visitor will have something pressing to ask about this classic mixed family farm in the rolling hills between Alton and Selborne, where Gilbert White wrote his natural history classic.

“We tend to treat each family individually rather than as part of a big group,” Mr Brock explained. “So when we go and make our daily checks on the animals, they can pop in a buggy with us and go round the farm. If we can talk about all the things we are doing, it sends the families away with a better idea of what is happening on our farm and in agriculture generally. We don’t hide anything. If we go into a field of sheep and there happens to be a dead one, there’s a dead one. We discuss it, and they have a true picture of what is involved.”

There are 650 acres, with 450 acres down to combinable crops of beans, wheat and barley at the moment. Three farmers from the area formed a syndicate, and Manor Farm was added so that the arable area could be run on a contract farming agreement. This means that Manor Farm does not have to own any arable farming machinery as one combine covers about 2,000 acres owned by the syndicate.

Half the grain from Manor Farm goes to the Hampshire Grain cooperative at Micheldever and the rest is stored on the farm. “My father was one of the founder members of Hampshire Grain, and historically that is how we have always managed our grain,” said Mr Brock.

On the remaining 200 acres, there used to be a herd of 50 suckler cows on the farm, but the number has fallen to about 15 today. The sheep flock used to be about 200 strong, but now there are about 425 Romney cross ewes lambing.

“The ewe flock is very much a grazing based enterprise and they don’t come in for lambing unless they are in difficulty.” This limits the need for livestock housing to the cattle yard. The farm had its own butchers shop until last June, and all the cows would have gone through the abattoir at Farnborough to supply the shop, as well as about a third of the sheep. Now the cattle go to Owtons at Fareham and the sheep go to ABP at Yetminster in Dorset or H.R. Jasper and Son at Launceston in Cornwall.

About three years ago, an old style countryside stewardship agreement finished on the farm which then joined the higher level stewardship scheme: this has about six years to run. Recently, the farm also became part of the Selborne cluster, one of several collaborative projects by farmers across the country who can be paid grants to help manage large areas of landscape across farms rather than smaller patches of land on individual farms. The Selborne cluster has enjoyed publicity after harvest mice were found to have returned to the area after a long absence. It was Gilbert White who first identified the harvest mouse.

“It is well documented that clusters are the way to go if you want to get into landscape schemes,” said Mr Brock. “As an individual farmer, you have to compete for most environmental schemes. But if you can do it in a cluster, then you have more of a chance. The cluster also helps you target what features to enhance or which options to go for.” Most of the farmers involved are in the South Downs National Park anyway, and the cluster gives them access to the park rangers and volunteers to carry out surveys. “We can build up far more information than we ever would as an individual farm.”

Click here to read more on the farm visit