» Making a success of dairy farming 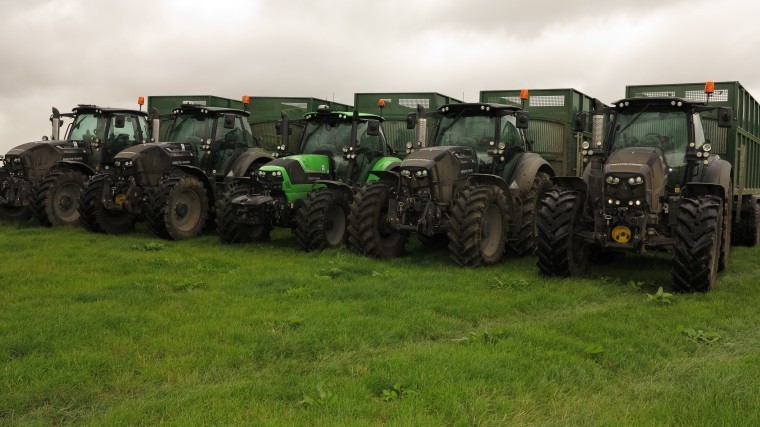 Dairy farmer Peter Joules’ loyalty to his favourite machinery dealer meant he would have bought whatever tractor was on offer – but he was very glad it turned out to be Same Deutz-Fahr.

Peter, who trades in a partnership with son Rob and wife Hilary as PHR Farms, has bought equipment from Robin Back at Ivychurch-based Bell Agricultural since the business moved to Kent in 2002, and the simple matter of Robin’s new franchise wasn’t going to put a stop to that.

When a policy change by one of the mainstream tractor manufacturers meant Bell Agricultural would need to link up with a new brand, the partnership’s fingers were collectively crossed for a Deutz-Fahr deal – but they would have trusted Robin regardless.

“We really wanted him to go for Deutz-Fahr, because we have always thought it was a quality machine, but frankly we would have bought our tractors from Robin whatever name was on the side,” Peter explained.

“Robin has looked after us for the past 14 years, and we saw it as payback time. Farming is built on loyalty and on good service – and that’s what we have always enjoyed from the team at Bell Agricultural.”

As a forward thinking, efficient business, PHR’s policy is to replace machinery at the end of its warranty period, which meant that the partnership was in need of four new tractors just as Robin was unveiling the Deutz-Fahr franchise back in November 2015.

As a result, while the rest of the farming community was enjoying the hog roast, beer and fireworks at the Bell Agricultural Deutz-Fahr launch party, Peter and Robin were thrashing out a deal that was signed the next day and involved not four, but five new machines.

“I was only there for the party but ended up having to work for my supper,” joked Richard Hicks, Same Deutz-Fahr’s sales manager.

PHR has since taken delivery of four 7250 Warriors – a limited edition black version of the 263bhp model – and a full-spec 6180 TTV with full variable transmission.

“Since the original deal we have been back for more, buying another 6180 and two 5085Ds for yard scraping,” explained Peter.

Buying brand new tractors for such a basic task sounds excessive until Peter explains the partnership’s thinking. With the Deutz-Fahr machines covered by an impressive warranty and holding their value well, they work out no more expensive than the second hand machinery that last year landed the business with a four-figure repair bill.

It is that kind of cool logic that has seen Peter, Hilary and Rob make a success of dairy farming at a time when many others are finding it hard going.

A straight-talking and determined businessman, Peter’s hands-on work ethic and no-nonsense approach to the commercial realities of farming have seen him and his family team – supported by a dozen employees – grow the business considerably since they moved here in 2002.

Originally from Cheshire, they moved to west Wales and then to Kent, where Peter took on a 25-year business tenancy on 800 acres of land at Bircholt Farm and Hope Farm, part of Michael John Knatchbull’s estate at Brabourne, just outside Ashford.
He praised the support of his landlord and the welcome he feels he has received from everyone in the county – not least suppliers like Robin Back, now clearly more of a friend than a business acquaintance.

Peter described the two farms as together creating “one of the best laid out pieces of land in the country” because of the way the buildings sit in the centre of each plot and the farms themselves create a figure of eight shape. “I don’t know of a better place to farm anywhere,” he commented.

Peter, Hilary and Rob began with 700 cows, moving to the east of the country when dairy farming was generally moving westwards because, he said, “there are more opportunities to be had if you are not competing with dozens of other people.”

It is picking up on the opportunities that has helped the business expand to 1,500 head of cattle and has seen PHR Farms buck the trend by delivering strong results from milk production in a challenging climate.

“There are lots of opportunities to be had,” he said. “You just have to spot those opportunities, capitalise on them and work hard. You also need to invest in the best machinery in order to do the job efficiently.”

As well as taking advantage of the plentiful supply of straw and cereal produced by this predominantly arable part of the country, PHR Farms has also developed a knack of spotting opportunities where others see problems – in taking on land for silage, for example.

“Black-grass is a real nightmare for arable farmers but we are happy to use difficult land for short-term leys and crop it for silage,” he explained. “The fact that we cut it several times tends to reduce the black-grass problem, and after two years we hand it back in a much better state than it was.

Because the business relies on good quality silage, PHR Farms spreads significant amounts of slurry and fertiliser on the land it uses for grass before leaving it with higher nutrient levels than it had originally.

“As long as the landowner uses direct drilling rather than turning the soil over and exposing the old black-grass seeds, they should also see fewer weeds,” Peter added.

The business needs to find a steady supply of suitable land for growing forage, and currently farms around 2,000 acres across the county. It is supported by agricultural consultant T Denne & Sons, which plays an important part in finding suitable good quality two-year lets.

In another example of making the most of the opportunities on offer, PHR Farms operates a muck-for-straw scheme with local arable farms in order to obtain the 5,000 straw bales it gets through in an average year.

When it comes to making silage, the partnership prefers to use its own in-house team, but makes sure they have the best tools to do the job. “We save the cost of paying a contractor and invest instead in buying the best equipment, which is then used by a team we know we can rely on,” he explained.

That quality equipment includes a commitment to Bailey trailers that stretches back to Peter’s time in Wales and has created another business relationship that is bordering on long-term friendship in the shape of sales manager Graham Wright.
Peter bought his first Bailey – an eight tonne trailer – in 1991, from company boss Michael Bailey, the eldest son of founder Tom Bailey.

He bought two more in 1992 and estimates that since then the business has bought about 60, mostly from Graham. PHR Farms currently runs about a dozen Bailey trailers, the newest dating back to 2015.

“It’s simply the best trailer on the market,” said Peter, whose view was not surprisingly echoed by Graham. “A trailer is just a box on wheels; we just happen to build the best box on wheels,” he commented.

With PHR Farms’ commitment to efficiency founded in running up-to-date, quality machinery, Peter is also good friends with his bank manager. He paid tribute to the support provided by the Clydesdale, as well as to the family’s many other suppliers and customers.

“I can’t over-emphasise how welcome the people of Kent have made me and my family since 2002 and how well we have been looked after by suppliers like Bell Agricultural, Bailey and many others,” he said. “This is an area of great opportunity and first class people.”

As well as the three machinery operators, PHR Farms has nine staff to look after the 1,500 cattle which supply just short of 10m litres of milk a year to the Arla co-operative which the business has now joined after starting life as a supplier.

The autumn calving cows are milked at Bircholt Farm and produce around 7,500 litres per head per year, while the 500 spring calving cows at Hope Farm give slightly less, at just under 7,000 litres each. The milk all goes to Arla’s Aston Clinton dairy in Aylesbury.

The family team went to New Zealand to research and then buy the rotary parlour at Bircholt Farm, as well as doing all the preparatory building work ahead of the equipment being fitted by a team from New Zealand.

The local workforce will be pleased to know that the family does not believe the benefits of further automation would justify the cost of bringing in more high-tech equipment.

“PHR Farms is an experienced and hard working team and the partners all like to take a hands-on role,” he said. “The team has helped the family build up the business and we do as much as we can in-house to keep costs down and quality up.”

The new Deutz-Fahr tractors, already fully-specced, have been delivered with the added benefit of a 4,000-hour, three-year warranty, another major benefit to the business.

As Richard Hicks explained: “As a manufacturer, Deutz-Fahr prides itself on build quality and reliability, as well as on technology that is equal to anything else out there. That reliability is why we can offer such a great warranty, something that means farmers can be confident about their investment.”

Peter was also impressed at receiving support not just from Richard but from the main man at Deutz-Fahr UK & Ireland. “Mark Ormond, the managing director, came to see us while we were discussing what we needed,” he said.

“It was an impressive hands-on approach that simply wouldn’t have happened with most of the other global brands.”

With PHR’s short-term leys moving each season, next year looks set to be particularly efficient, with many of the silage fields close to the business’ Brabourne base.

To make the most of that opportunity, the team plans to use an umbilical slurry system with a 6,000m reach in order to spread nutrients on the grassland, improving the soil for the future benefit of the owner as well as ensuring a good silage crop for his herd.

“A hard-working team, the right equipment and good back-up from machinery and equipment suppliers and technical advisers are all vital ingredients in running a successful dairy business,” he concluded.