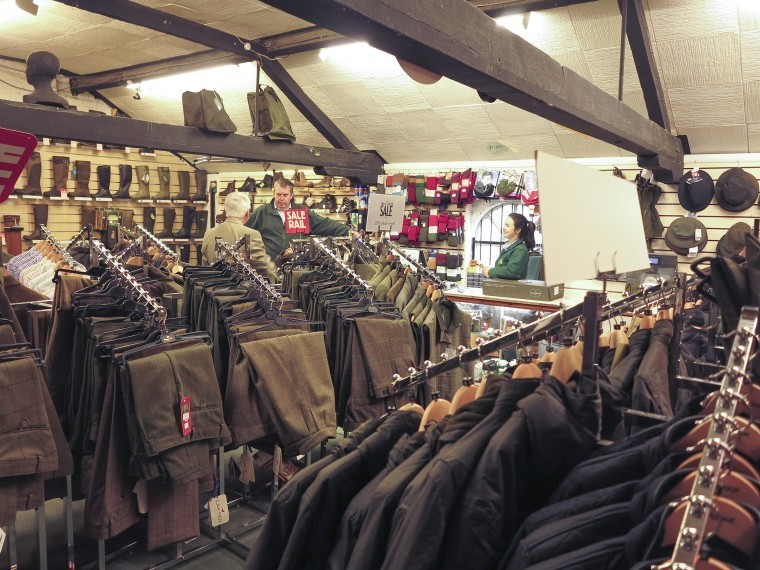 It may be approaching its centenary, but Ashford-based Kent Wool Growers is looking to the future, not the past, with a new store in the east of the county just one of a number of new developments.

KWG has brought in new technology to streamline the service it delivers, driven costs down to give farmers a better deal and is about to introduce online sales via its new website to make buying simpler.

The company’s new store at Statenborough Farm, Felderland Lane, Worth, just off the Eastry bypass, will make life much easier for customers in the Canterbury and Dover areas who will no longer have to travel to Ashford.

The 4,000 sq ft store will replace the old Grain Harvesters Country Store – but on a new site – and marks the next step in a two-year transformation of the co-operative venture that began in 1920.

But while managing director Peter Holmes is tirelessly driving the business forward, KWG continues to value the experience and knowledge that it has built up over the past 96 years, with 68 year-old stalwart John Donovan still a familiar face on the shop floor in Ashford.

John, whose local memories extend as far back as the weekend Folkestone music lovers had to choose between Fleetwood Mac or The Who when they both appeared in the town on the same night, has worked for KWG, which also has a store in Hands Cross, West Sussex, for 51 years.

While even he wouldn’t claim to have first hand knowledge of every single one of the 36,000 stock lines that the company now keeps, there isn’t much he doesn’t know about the business, the likes and dislikes of customers and where to find the product they are looking for.

“I’ve seen a lot of changes since I’ve been here, but KWG’s focus throughout that time has been on serving the customer and stocking the right product,” he said. The town has changed, and farmers have changed too, but our commitment to farming and farmers certainly hasn’t.”

Those changes are reflected in KWG’s current growth strategy, with a soon-to-be-launched new website reflecting the fact that farmers are increasingly buying online and the new Worth store taking the stock closer to the customer and avoiding the need for customers to travel into Ashford town centre.

KWG has bought the former Country Store business at Wingham from new owners Frontier, but with the international business keen to keep the retail side away from the grain business, part of the deal was that the shop had to move to a new site.

“The new three bay building, which is about four miles away from the old Country Store, will sell roughly the same range as the Ashford shop but without the quirky layout which is a feature of the old building in Tannery Lane,” Peter explained. “It will be a convenient, modern layout with everything to hand and offering great value for money.”

What many people don’t realise is that KWG’s buying power as part of the £1.4bn turnover United Farmers group means it can offer low prices on some unexpected items.

“Because we buy so much dairy chemical product direct from the manufacturer, we get good prices right across their range, which means our washing powder can be cheaper in our store than in the local supermarket,” explained Peter.

That buying power will only increase when the new store at Worth comes on line, while the local economy will be boosted by the extra seven staff being taken on.

The Worth store won’t include a gun store initially but it will have a full range of animal health products, together with fully qualified and experienced staff to sell them. “This is something that the old Wingham store didn’t stock, so we are hoping local farmers will see that as a major benefit,” said Peter. “We stock medicines for horses and pets as well as farm animals and can provide advise on their use.”

Specialist rep Alex Louca, one of five staff out on the road for KWG, is able to advise medicines as the company’s suitably qualified person (SQP) as well as delivering other items to farmers around the county.

The new KWG will stock the full range of clothing and boots from the likes of Alan Paine, Seeland, Toggi, Barbour and Le Chameau, as well as vast selection of hardware and farm supplies, pet food and poultry feed and equipment.

The latter range will be well-received by the smallholders and other local people who keep their own hens or who farm on a smaller scale, an important customer base for KWG.

A knowledgeable equestrian team will be on hand not just to sell clothes, bridles, conditioning supplies and tack but also to fit hats and body protectors correctly. “We pride ourselves on making sure our staff are fully trained to do the job properly and to be aware of all the relevant legislation,” said Peter.

KWG also stocks equine products such as shavings, feed and haylage, while the company’s new website will offer a ‘click and collect’ service that will allow farmers to get the best online deal and then pick up the item in store.

KWG, which currently has 4,000 farmer members, was set up by a group of sheep farmers to market their wool. As John Donovan explained: “Before that time, wool was sold by bargaining and depended purely on the skill of the seller. I might have better quality wool than you, but if you were better at driving a bargain, you would end up with a better price than me.

“Farmers weren’t very happy with this – or, at least, those who weren’t good at bargaining weren’t – and so they introduced a grading system which meant the price was fixed by the quality, not by the skill of the salesman.”

What may come as a surprise to the average passer by is that the Tannery Lane site still grades a million kilos of wool a year and is one of just two independent wool graders in the country. The wool is baled and sold from the Ashford site, with KWG paid for the service by the British Wool Marketing Board.

Although it will not have a gun store, the Worth site will stock shotgun cartridges and will be a useful new facility for smallholders as well as for farmers.

“It’s fortunate that we look after both groups, since smallholders are still spending money while farming is somewhat in the doldrums,” explained Peter. “In a sense farmers are benefiting from the breadth of our customer base as it is allowing us to expand at a time when money is tight in mainstream agriculture.”

Peter joined KWG two years ago from a sales background and has been focused on modernising the business and making it more competitive. “There have been lots of changes but we have moved forward considerably and continued to grow while protecting the company’s values,” he said.

“We have better stock control systems in place, a more motivated team and keener pricing, together with knowledgeable staff who are determined to deliver the best possible service to customers.”

The store, which has always been open to the public, is now open all day on Saturdays, another change which helped to bring it into the modern era and win more customers.

“I was brought up on the family arable farm in Durham and worked there after going through agricultural collage,” explained Peter, now 55. “After stepping aside a few years later to allow my younger brothers John and Christoper to run the farm, I began a career in the food industry.

“I ran a poultry processing plant and then went into food retailing, running a company that supplied farm shops with frozen product.

“So while I haven’t worked as a farmer I certainly know farmers, and when my predecessor Ray Spendiff retired in January 2014 I saw KWG as a challenge that I knew I would enjoy. It feels like I have now come full circle, from the family farm to a farming co-operative.
“What I have tried to do is learn from my experience of the commercial world by taking the best bits of the industry – like more modern stock control – and introducing them to this business.”

When it began in 1920, KWG was the first farming co-operative in England, with the first sales of medicines, minerals and spray markers beginning in the fifties. “When it was founded, only member sheep farmers could buy from the shop, but over the years it has increasingly opened its doors to the public,” said John.

The business now employs 55 people, and as its centenary approaches, Peter’s philosophy is simple. “The only way we are going to go forward is by giving customers what they want, when they want it, at the right price, while delivering great service.
“With the opening of KWG Worth, that service is now available at three outlets in Kent instead of just two.”