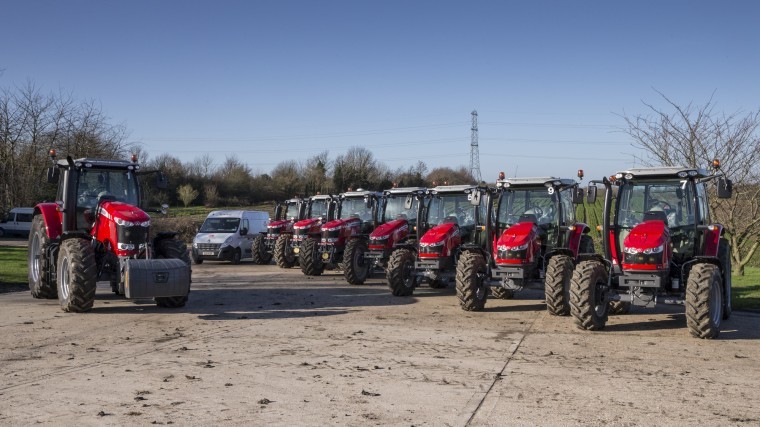 Weather, pests and fluctuating demand can all make life tricky for Watts Farms director Joe Cottingham, but he accepts those challenges because he knows they are to a large extent outside his control.

What Joe doesn’t need is to give himself problems that are, in his view, controllable, which means making sure the tractors his business depends on are reliable, 365 days of the year.

That need for ultimate reliability is why Watts Farms has just taken delivery of no fewer than 18 new Massey Ferguson machines, all delivered with individual specifications to make sure they are spot on for the task in hand.

The good news from the tractors’ point of view is that once they have completed those 365 days they can take a breather, since the Watts Farms philosophy is to change the entire fleet every year.

It means that the new red tractors currently keeping things running smoothly at the Watts Farms base at Hill Farm, Farningham – and the 1,000 acres of farmland around and about – will be moving on to pastures new at the end of their 12-month lease.

“There are problems that I can’t control, but one thing I can do is make sure that I’m not left high and dry by a tractor that breaks down,” said Joe, one of the four Watts Farms directors and the man responsible for making sure that the company continues to pack the 85 tonnes of fresh produce that its customers expect each week of the year.

“Our machines do between 2,500 and 3,000 hours in a season, much of it on the roads, and so they don’t have an easy time of it. They need to be reliable and I need to know that they will do what I need them to do, time after time.”

With such a lot at stake – and a big order to place – Joe did plenty of homework, but it soon became clear that the most competitive deal and the best back up pledge was the one from Agwood Ltd put together by sales rep Marcus Glover.

“Marcus came up with the right deal and I am confident that the Agwood team will keep the fleet going without any problems so that I can concentrate on making sure we grow, pack and sell the right crops for our customers,” said Joe.

“We need the bigger machines for cultivation, drilling and fertiliser spreading, while the mid range tractors are mainly for hauling produce from one of the farms to the packhouse here at Hill Farm,” explained Joe. “Essentially they are multi-purpose machines that we can use for whatever needs doing; all we insist on is that they perform reliably, day after day.”

That reliability is important for a company that has a carefully planned schedule of planting designed to keep its wholesale, food service, supermarket and restaurant customers stocked up with the wide range of products that Watts Farms supplies.
“We are planting from March through to September and we are harvesting from April through to November,” said Joe. “We import produce throughout the winter in order to keep the packhouse busy and our customers happy.

“There is a crop going into the ground every day of the week through that planting season, so you can see the problem it would cause if we suddenly found we had a machine out of action.”

Marcus explained that Agwood’s attention to detail even extended to devoting one six-hour session just to getting the wheel and tyre sizes right on some of the tractors in order to meet specific requirements such as under-tractor clearance.
“We spent a huge amount of time and effort working with the Watts Farm team to make sure each individual tractor was built to the spec the company needed,” he explained. “Each machine is needed for a specific job and so we made sure each machine was ideally suited to that job.

“The Massey Ferguson range has a huge choice of options designed to give farmers exactly what they need from their machines and Agwood has the specialist knowledge to support the farmer in making the right choice. The Watts Farms operation is special – and so are our tractors.

“Some of the tractors are used for drilling, but only small areas at a time. Some need GPS to give them ultimate accuracy and others are used for irrigation and have to be able to keep going 24/7 in a dry period,” said Marcus. “These are unique tractors for unique jobs.”

Watts Farms started this season’s planting with salad onions and will follow an intricately detailed timetable through until the last spinach goes into the ground in late September. The company grows 2,000 acres of crop on just over 1,000 acres of land.
Joe is confident that the new Massey Ferguson fleet, and the back up from Agwood, will make that process as simple as possible, at least as far as motive power goes.

Leasing tractors for a year at a time also gives Watts Farms a high level of business flexibility and means the company can adapt quickly to changing circumstances.

Watts Farms supplies a full range of fresh herbs, spinach and other leaves, chard, salad onions, kale, more exotic crops such as rainbow chard and pak choi, peas, beans, broccoli and asparagus – and more. As well as cropping 2,000 acres on the westernmost edge of Kent, the company grows chillis and hydroponic herbs under glass.

Joe’s fellow director Ed Gray runs the food service side of the Watts Farms business, which supplies the produce to restaurants and hotels in London and beyond, while the company also sells through every wholesale market in the UK as well as supplying Asda and Marks & Spencer.

Ed’s parents Mike and Avril Gray are the other directors of a business that is continually looking for new markets and is currently considering selling produce online, direct to the consumer.

The company employs 300 people across the whole group, with 170 of those at the Hill Farm packhouse and on the land and the rest working for the food service operation.