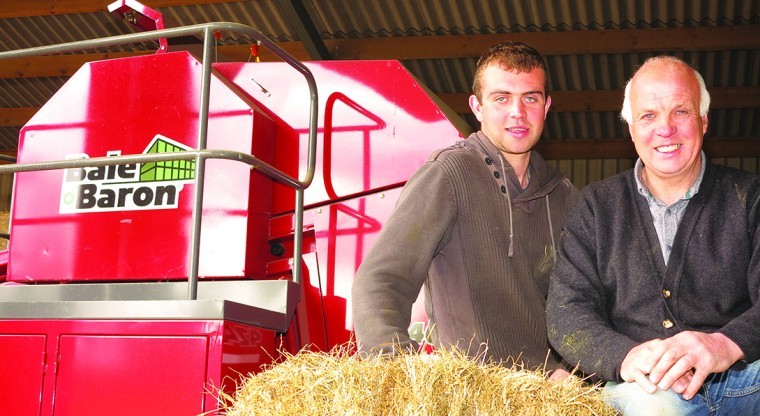 Somewhere close to the Pilgrims Way in Kent is a short length of hedgerow that borders the fields of a number of different landowners – and is cut by five different contractors.

“It’s what contractors do in the winter, but by the time you factor in the running costs of the tractor, cutting a few metres of hedging is not a great way of making a living,” explained Mark Wildish, whose contracting business is based in nearby Lenham.
It was realising that there was little point in becoming the sixth contractor to offer hedge-cutting in the area that prompted the 22 year-old to invest in a piece of equipment that would allow him to service a niche market.

As a result, Mark, who trades as M W Agri, is now the proud owner of a Kivi-Pekka stone collector, a piece of machinery rarely seen in the south east but which has an impressive ability to clear fields of stones and flints and collect them in a clean state.
The stone collector can pick up stone from 25mm to 300mm, making it ideal for golf course and amenity work as well as clearing stones from fields to save wear and tear on machines.
And while the stone collector is designed to give him a year-round business, Mark has also invested heavily in his mainstream summer activity of hay making by taking delivery of a range of new equipment that includes an impressive Bale Baron multiple bale packer.

“Farmers want their hay baled and removed quickly but they increasingly also want it in the small bales which the equestrian world prefers,” said Mark.

“The Bale Baron offers the best of both worlds by grouping small bales in packs of nine or 21, allowing them to be moved and stored efficiently but then broken down easily into small bales when and where they are needed.

“In our experience, using the right equipment to make and sell hay efficiently and in the right format can double its value, and with fewer ‘old school’ farmers selling the odd bale from the farm gate, hay and straw are starting to command premium prices.”

MW Agri’s investment in new kit or hay, haylage and straw contracting and baling doesn’t end with the Bale Baron. A new John Deere 6125M tractor and 854 round baler, McHale HS2000 bale wrapper, Kuhn tedder and a Lely 2.8m mower/conditioner and rake are now also housed in the barn and ready for action, alongside a Warwick bale trailer and a NC low loader trailer.

Although delighted with the service he received from Sam Barnes at John Deere dealers Burden Bros Agri, Mark paired the Bale Baron with a Valtra N134 because of the 200 litres per minute oil pump, which allows the Bale Baron to work to its maximum, and because of the tractor’s warranty package. Again, local dealer R W Crawford did him proud.

“All the machinery dealers have been very helpful in allowing me to grow the agricultural contracting side of the business, with Agwood also coming up with a good deal on my new Massey Ferguson 1840 in-line baler and grass equipment,” Mark explained. An additive dispenser for the baler is next on the shopping list.

Mark, whose father Andy is a partner in the business, uses his grain trailer for muck removal and dung carting, which works in tandem with the muck spreading side of the business.

The business started when Andy – a self-confessed hobby farmer – found he had a surplus of hay a few years ago. That realisation tied in with Mark, a national circuit show jumper, trainer and instructor, hearing from a number of equestrian friends that they had been let down by their suppliers.

“I told dad that I could easily sell any spare hay he had, and pretty soon I had built up such a big customer base that I had to start buying hay in for sale,” Mark explained.

He was just 19 at the time and now, with business booming, he has taken the decision to invest in the equipment he needs to deliver a complete service, not just supplying hay to his equestrian contacts but making it, baling it and carting it on-farm for customers across Kent, Sussex and south London.

Although M W Agri has its own land in the area – and is always looking for standing grass pasture to add to its own hay stocks, Mark was keen to stress that the business’ own crop is all round baled.

“The Bale Baron is specifically for customers and they come first every time,” he explained. “We won’t be using it on our own hay crop and making everyone else wait until we have finished. We have bought the best kit available to make life easier and more profitable for the farmers we support.”

The stone collector is an impressive machine that can collect up to 700kg of stone per minute and can also be used to pick up roots and dead wood after an orchard has been grubbed.