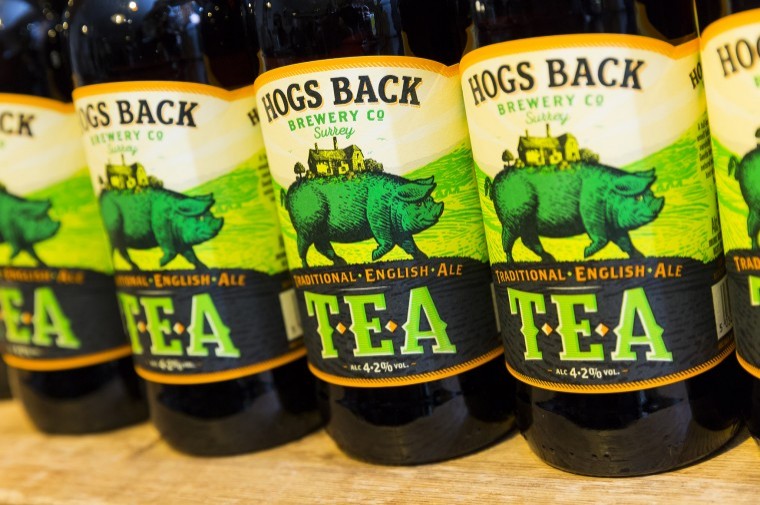 Rupert Thompson beams as he quotes the mantra of his latest investment in the brewing process which he proudly operates from a former dairy farm in Surrey: “A furlong* from field to firkin.”

His head lifts to survey the new 8.5-acre hop garden behind the Hogs Back Brewery at Farnham, Surrey planted a few weeks ago by employees, boosted by a team of willing volunteers from the company’s Tea Club, “tea” in this case meaning “traditional English Ale”.

Rupert is delighted at progress with the latest part of the brewery’s £700,000 investment plan, to create a new hop garden just yards from what will become a traditional drying kiln and packing store, where the harvested crop will be brought fresh from the field and be vacuum-packed for storage within 24 hours of picking.

First, though, the kiln has to be built – rising from the site of a former barn at Manor Farm, where the brewery has operated since 1992. It’s the final part of the huge investment programme overseen by Rupert in the past 12 months and he’s clearly very excited at the prospect.

We walk the site, on a bright but cold January afternoon, and Rupert patiently explains what is planned. The kiln will occupy the same footprint as the barn and will use original brickwork as the first level, incorporating the charming arched doorways. Above will be two floors, built using modern, energy efficient materials, topped by old-style louvres. Rupert hopes to install old wooden floors, which will absorb the hop resin over the years to give the building a traditional aroma.

He is passionate about melding old and new methods, saying: “I like to do something different – to learn from how things used to be done, to find new ways of using old technology. People might think I’m barking mad, but I believe we can sometimes find innovation by going backwards.”

Hops picked and brought direct from the garden will be lifted by hoist to the second floor, where they will be spread to dry on the wooden floors. When ready, a trap door will release them to the first floor, where they will be vacuum packed using state-of-the-art machines, ready for storage. The whole operation should be completed within 24 hours, creating the freshest hops in perfect condition ready for the brewing process a few yards away in the main building.

Hogs Back has been on the site since 1992, when farmer Tony Poulson began to diversify his former dairy operation. He still lives in the farm house and is clearly watching with great interest as the latest part of the brewing story takes shape before him.

The new hop garden incorporates 2,000 plants dug up from a site opposite the brewery, which has been sold for a housing development. Tony is sad to see the loss of an arable field, but says it’s a sign of the times and if he hadn’t taken up the offer, a neighbouring farmer would have done.

A further 3,500 hop plants brought in for the new garden include 1,200 cascade, 800 Farnham White Bine and 200 Fuggles. Head brewer at Hogs Back, Miles Chesterman, says he was delighted at the response by Tea Club members, who came to help with planting in the autumn. “It was a real community effort,” he said.

This feeling will be further generated by the new kiln, which will be offered to community groups for use as a public space for the 11 months of the year that it’s not being used for drying the crop. A visitor centre will also be created, to share information about the history of brewing.

Hogs Back is one of a growing number of farm brewers in the UK. They draw on rural heritage and attract a loyal band of drinkers. Tours of the brewing process are extremely popular, and happy visitors speak of generous “sampling” which brings them back for more.

Rupert is confident in the brewery’s future, adding: “A £700,000 investment, at a time of some uncertainty in the beer market, speaks volumes for our long-term commitment to brewing in Surrey. Hogs Back is the biggest hop-growing brewer in the UK and this expansion with the larger hop garden and new kiln will make us even more sustainable.”

As a final charming touch to the pick-to-process system, Rupert is hoping to use horses to bring the first hops for the new kiln. He is appealing to owners in the area to offer their animals for the harvest and is excited at the prospect of using a truly energy efficient method of transport.
“If it works, it will be a marvellous sight,” he sighs.