Helping farmers get rid of their waste - South East Farmer 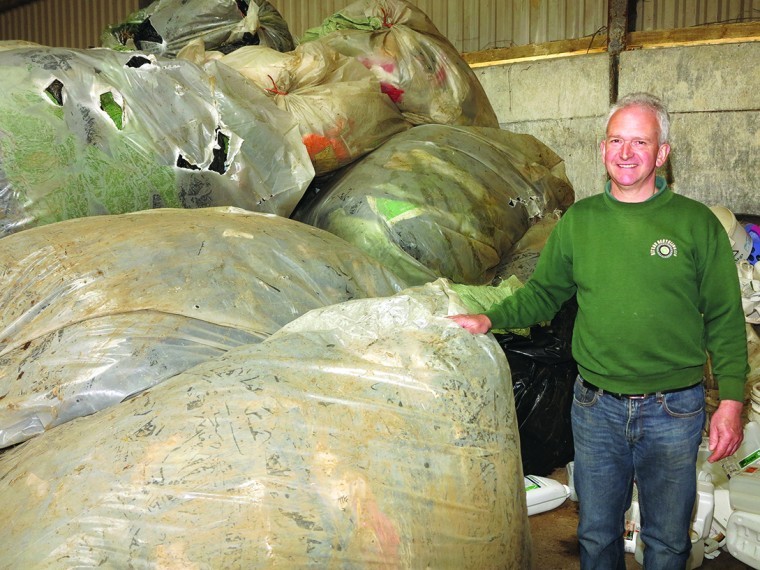 Tucked into the corner of a former landfill site – currently being capped – on the outskirts of Andover is a thriving operation that is playing its part in making sure such facilities will not be needed in future.

Kitson Recycling is a prime example of a business that is meeting a need, protecting the environment and helping to produce useful new products at the same time.

Launched in 2006 by Ian Kitson, the business collects recyclable plastics from farms across the South East and then delivers those materials to companies that return them to their original state so that they can be brought back to life as new products.
The company also collects tyres, workshop and hazardous waste, oils, redundant agrochemicals, shotgun cartridges and old veterinary medicines, but its roots are very much in the recycled plastics industry.

“Back in 2006 I realised that the new legislation that was about to come in, banning farmers from burying or burning waste materials and requiring them to keep an audit trail of what they did with them, could be a useful business opportunity.
“The legislation was due to come into force the following year, so I made sure that Kitson Recycling was up and running well in advance of that date.”

The company, which Ian runs with long-term employee David Pepper, succeeds by providing a reliable and responsive collection service for all kinds of plastic waste while charging the farmer less than it would cost to send it to the kind of landfill site that is just 100 yards from the Kitson depot at Hurstbourne Priors in Hampshire.

Not only is that good news for the planet, which is rapidly running out of holes in the ground that need filling with our rubbish but it allows Solway Recycling, one of the companies to which Kitson delivers the collected plastics, to reuse the raw material.
After washing it and melting it back into raw plastic, Solway turns it into new products including calf pens, chicken houses and garden furniture.

“We have a trading agreement with Solway, although we are free to supply the material it collects to other buyers,” Ian explained while sitting on one of the company’s recycled benches. “Solway then uses another company to pulp the plastic and turn it back into standard sheets which it then uses to make new items – like this bench.”

Kitson Recycling also makes life easy for farmers by offering the Solway plastic bin and liner system. Farmers buy the bin and fill the liner it holds with as much of the same kind of plastic as they can cram in. Collection is charged per bag, with collections of between six and 19 bags costing £20 per bag.

That figure has not increased over the past eight years, mainly because the increasing popularity of the Kitson Recycling approach has seen the number of farmers signed up to the scheme increase to 1,100, allowing it to operate more efficiently. During that same period the company has sold 4,000 Solway bins.

One benefit of the Kitson operation is that there is no annual charge. “If a farmer only wants us to collect his bags every 18 months he only pays for that one collection,” Ian explained. Most have collections roughly once a year, with the company generally able to collect the waste within a week of the request – sometimes much sooner.

Alongside a dedicated lorry with a special grab to collect the bags, the company has a smaller trailer towed by a four-by-four vehicle that can be used to access difficult sites. All the farmer has to do is keep the plastics separated into different bags so that the recyclables are uncontaminated.

The majority of the waste collected is used silage wrap, with a Solway bin able to contain at least 250 of these, storing them tidily until they are collected and securely baled back at the Kitson Recycling premises ready to be delivered to Solway Recycling or another buyer.

Ian and David collect 1,500 tonnes of silage wrap per year, along with polythene, baler twine, fertiliser bags – including the inners – triple rinse spray cans, rigid plastic drums and containers and net wrap. As well as solving the farmer’s problem, the operation benefits the environment and will become increasingly important as green issues continue to dominate the agenda.

“Farm Assured schemes are increasingly focusing on what the farmer does with his waste products and milk buyers are among the customers for which the issue is starting to become more and more important,” said Ian.

“Inspections are starting to be more rigorous in some areas – particularly where hazardous waste is concerned – and as farms are tending to get bigger, so there is increasing responsibility on them to protect the environment and act responsibly.” Kitson Recycling takes hazardous waste straight to a specialist disposal/recycling site.

While Kitson recycling has been in operation for the past eight years, Ian’s experience in farm waste recycling goes back two decades. He ran a contracting business over a number of years before his sewage sludge business was bought out by the Cleansing Service Group.

He worked for the group for seven years and was managing their agricultural operations when he spotted the opportunity to create a company that would help farmers meet their need to comply with the upcoming legislation.

The business now also collects cardboard and tyres, a service that peaked when dairy farmers were leaving the industry in numbers and needed to deal with the tyres that they had been using to weight their silage clamps. “We need to be flexible,” said Ian. “Tyres are a smaller part of what we are doing at the moment, but collecting hazardous waste, such as old veterinary meds, is increasingly in demand.”

As well as getting rid of the problem for farmers, Kitson Recycling is proud of its environmental credentials. “We currently recycle 97% of what we collect – and that is a figure that has stayed constant ever since we started,” said Ian. “Virtually everything we pick up is given a new life and only a tiny fraction ends up in the ground.”