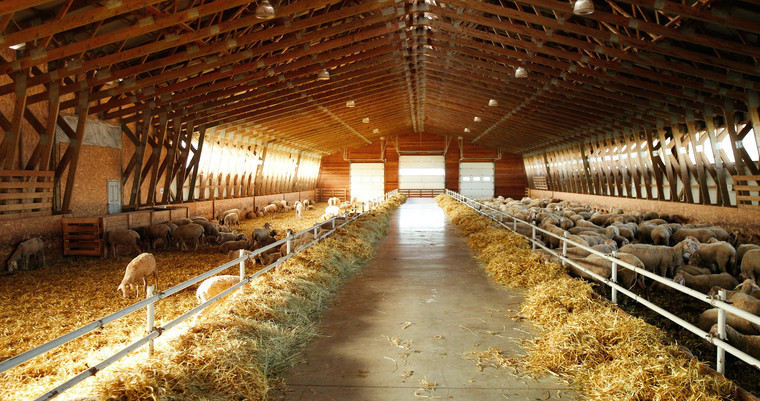 Climate change has been foremost in our thoughts for much of 2021, with the COP26 event that began in Glasgow on 1 November focusing the world’s attention on the environment and how we human beings are affecting it.

For many, the doom and gloom around higher global temperatures, heavier rain and more extreme weather events in general provided more ammunition for the anti-livestock lobby, with a multitude of voices calling for global meat and dairy consumption to be greatly reduced.

While, regardless of the often misjudged and ill-informed criticisms it faces, the meat and dairy industry is not about to capitulate, there are good reasons why it needs to look carefully at how it operates and modernise its approach in order to reduce its environmental impact.

A recent article published by the Rural & Industrial Design & Building Association (RIDBA) pointed out that the UK livestock sector “has world class nutrition, genetics, tech, management and personnel, but the average productivity is dragged down by a very long tail of below average productivity on other livestock farms”.

The article, by Livestock Consultant Jamie Robertson, said one of the reasons behind the poor performance was a lack of investment in buildings, and said those who complained that they didn’t have the money to invest needed to look at examples that showed a healthy return on such investment.

Mr Robertson backed up his point by suggesting some farms “look equivalent to a haulage business in 2021 trying to compete using a Ford Anglia van and a Bedford TK”.

The article suggested investment in buildings would only proceed if the farmer, the builder, the lender and the planning consultant lined up the arguments and delivered a convincing case, adding: “The building sector has a major role to play in getting the other parties invested in a more sustainable future, not least because many of the other parties do not have the required knowledge to set out a project plan that is convincing to detractors.”

Any new building, particularly in the current climate, should improve food conversion efficiency – a measure of how effectively animal feed is converted to human food. According to the well-respected RIDBA, “a standard, measured improvement will be at least +5%, and where current systems are creaking, a lot more”.

As well as helping to make the case for sustainable agriculture in the face of the vegan lobby, such improvements also benefit the farmer’s bottom line.

A new building will also improve a business’ carbon footprint by making the operation more efficient. Better livestock facilities will help reduce environmental pollution which is important when attempting to comply with increasingly high retailers’ and legislative standards as well as boosting the farmer’s ‘feelgood factor’.

Another issue that has concerned the public in the past is antibiotic use. It’s something that has dropped significantly per unit of UK livestock in the past decade, due in no small part to investment in new buildings. RIDBA points out: “There is still progress to be made, but it is not going to materialise by using buildings that are hard or impossible to clean, or where stress on animals is contributing to current losses.”

Climate change is also impacting on existing buildings, with heat stress in cattle one of the areas forcing a rethink on ventilation and on the need for insulated roof sheets.

RIDBA, again, has pointed out that as cattle become more productive they process more energy and need to dump more heat. They also drink more water, with a high-yielding dairy cow consuming more than 100 litres per day. This means a building with 200 dairy cows will have a throughput of more than 20,000 litres of water a day, with at least 16,000 litres being excreted back into the system.

Another issue is that with cows increasingly likely to be housed all year round, livestock buildings have to operate at ambient temperatures above 15°c.

The latest data on thermal humidity index (THI) figures for the UK – a better measure of heat stress than air temperature – suggests that with climate change increasingly affecting the environment in which animals are housed, insulated roofing sheets are increasingly likely to be a good investment in terms of increasing efficiency by reducing stress.

RIDBA also points out that with the wind playing such an important part in managing ventilation, and thereby energy and moisture management in a cattle building, individual buildings should be carefully located. It also suggests mechanical ventilation – fans – can help reduce heat stress.

COP26 also highlighted the need for the greenhouse gas emissions relating to buildings (estimated at 17% according to 2019 figures) to be reduced if the Government is to meet its target of net zero by 2050.

Changes to building regulations such as improved insulation and airtightness and more efficient lighting have significantly cut the operational carbon of buildings, which makes reducing the amount of embodied carbon increasingly important.

For a semi-open sided livestock shed, the use of more efficient lighting and ventilation will reduce this, but an even greater benefit can be realised by good building design that maximises the use of natural daylight and ventilation, something that will also benefit the livestock.

With the UK Government now committed to net zero, RIDBA technical consultant Dr Martin Heywood believes “it is safe to assume that an even greater emphasis will need to be placed on the environmental design of buildings in future”.

This will include improved energy efficiency, better use of more sustainable materials and greater use of renewable energy devices, while heavier rainfall may require us to rethink the design of gutters and drainage systems.