Grab the opportunity to learn with both hands - South East Farmer 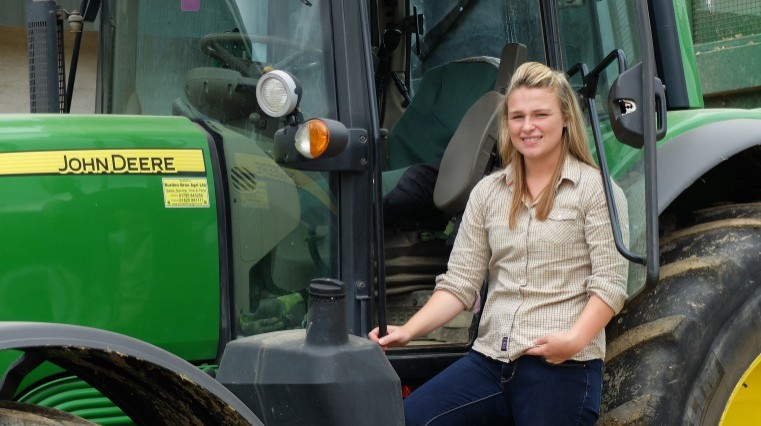 For 19 year old Emma Walsh, farming has been deep-set in her bones from a young age.

Growing up hearing stories of times gone by when her father used pitchforks to shift hay during harvest, and taking part in Young Farmers from the age of 10, she always knew that agriculture was the industry for her.

But it wasn’t until a few years ago that Emma decided to take the unlikely plunge from livestock into the world of arable farming.

“One day I think I just got pooed on one too many times and thought it’s time to give something else a go.”

But it hasn’t been an easy transition for Emma to make, with one thing standing out in a male dominated industry.

“A lot of people seem apprehensive about employing a female to drive a tractor. It was very easy to get jobs in livestock because I think women are known for their nurturing characteristics, but I applied for so many different arable jobs and some people wouldn’t even look at my CV.”

“Members of the public always smile when they see me out on the roads, they’re a lot more accepting. I think it’s the older generation that’s harder to crack. It would be nice to see more females being encouraged to get into the arable side of things.”
Studying a Level 3 diploma in agriculture at Hadlow College, Emma started working for JPF Farms in her second year, and is now in her third season with them.

“It’s been a good laugh and I’ve learnt a hell of a lot. The best thing about the job is no day is the same despite having a routine throughout the year and you never stop learning new things whether it’s about the mechanical side of things or best practice for different soil types.”

Emma, who is normally found driving a John Deere 7530 also enjoys working as a team member during peak times and despite some initial hesitance, she is now thought of as a key part of the team.

“Everyone just gets along so well and we have a real laugh which makes the 100 hour weeks go a bit quicker. The boys laugh at me for cleaning my tractor so much but I said it’s like a second home. You spend more time in that than in your own home during a busy season so you want it clean!”

Emma, who is now self-employed, has learnt that establishing a reputation for yourself is important in the search for employment in the industry.

“Being my own boss wouldn’t have been feasible to begin with because a lot of people didn’t know who I was or what I’m capable of. Now I’ve been with Joe Forknall at JPF Farms for a few years my name has got out there.

“Being self employed means that on the days it’s too wet to do anything here I can go off and work for other people. It also means I can move around to different farms and try something new or learn a new skill.”

Unlike many farmers, Emma doesn’t see the challenge as just encouraging young people into the industry, but ensuring those coming into farming are hardworking and keen to succeed.

“A lot of young people do not seem to understand the work involved in agriculture. They want the title but not the workload. I think colleges have a key role in promoting this and concentrating less on paperwork and more on real life work.
“We’re all guilty of getting distracted by the big kit but you’ve got a job to do and you’ve got to do it right.”

“I speak to a lot of females who don’t think they’re capable of working with machinery, but I know if they tried it they’d love it and see a whole different perspective. We also need to involve the public more in production, particularly when it comes to livestock.

“Often the public’s perception of a farmer is misunderstood. Some people don’t realise that certain practices are in place to help and not cause harm. A farm is a farmer’s pride and its very sad to see them being put in the wrong light.”
Emma, who has not ruled out working with livestock again during the winter months, is optimistic about her future within the industry.

“Not everyday’s a great day but as long as you hold on and don’t give up no matter what’s thrown at you, you will get there.

“I’ve learnt it’s important to always listen to people’s advice because they’re telling you it for good reason. Grab the opportunity to learn with both hands and don’t ever think you know better. Most people understand that you have to start somewhere.”

With plans to venture further afield to the likes of America or Australia and do the 2000 mile harvest, Emma would like to experience agriculture on a bigger scale and gain knowledge to bring home.

“I want to continue doing what I’m doing but on a much larger scale, not only to prove that girls can do it too, but to give other women a push and show what’s possible if you believe in yourself. One day I’ll be up there with the big boys.”