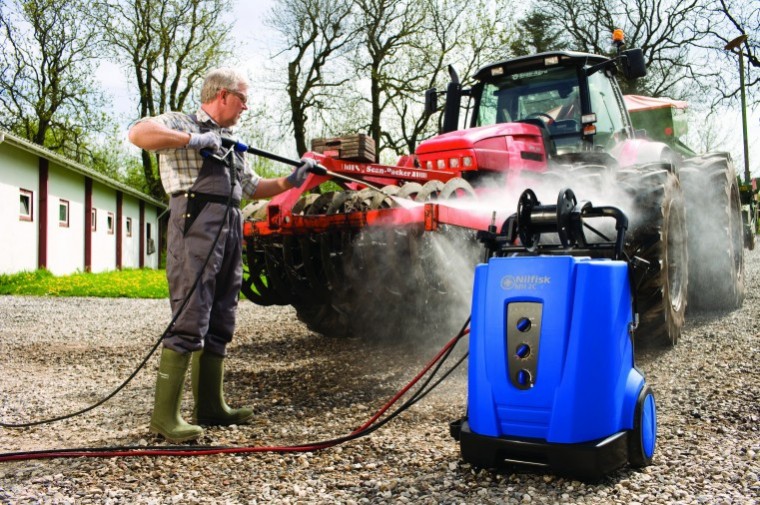 The well-known saying that “if a man can build a better mousetrap, the world will beat a path to his door” could well have been referring to Nilfisk’s newest range of hot water pressure washers.

The actual source of the quotation is still the subject of debate, but its message certainly rings true with Gary Fielding, manager of Crawley-based cleaning specialists Pressure Clean.

“The new Nilfisk MH range came out last year and has just been flying off the shelves,” he said. “Because it’s a completely new design, virtually everything about it has been improved, and at the moment nothing can touch it.”

Pressure Clean supplies, services and repairs a range of pressure washers for a growing number of agricultural and commercial customers, but while he’s confident with the performance of all the brands he stocks, Gary believes the new Nilfisk range tops the lot.

“It’s built around a proven pump and motor and diesel boiler combination that has shown its reliability over the years, but the other improvements have made a big difference to ease of use and mobility,” he explained.

“Nilfisk has got rid of the old single jockey wheel that used to be vulnerable to uneven yards and instead given the MH range four wheels, which makes it much easier to manoeuvre, however difficult the terrain.

“The controls have also been moved up the machine so that they are closer to hand and simpler to operate, and the whole washer is now focused on user ease and comfort. Anyone who has ever needed to use a pressure washer over a period of time will know how important that is.

“As well as being much easier to transport and use, the MH series – which runs from MH 3 to MH 7 – has proved very reliable and delivers excellent cleaning and impressive performance. There are other tweaks, such as the fact that the farmer can check the amount of diesel in the fuel tank.”

The performance particularly impressed Sevenoaks farmer John Dinnis, who asked Gary to demonstrate an MH 5 machine. “I took a 240V washer over to show him, but then I noticed that he had a three-phase supply to the farm,” Gary recalled.
“He was impressed with the demo, but I persuaded him to let me show him the extra power he would get from a three-phase model. I drove from Sevenoaks to Crawley and back and gave him a side-by-side comparison – and he was just amazed.
“The extra power delivered by a slightly more expensive machine was so impressive that he bought the machine – a Nilfisk MH 5M-210/100 PAX – on the spot and I left it with him. He has also told me since then that he likes the built in hose reel storage and the ease of use.”

An extra return journey from Sevenoaks to Crawley based on a determination to give the client exactly what they need is all in a day’s work for Gary, who has worked hard to cement Pressure Clean’s reputation as a customer-focused outfit.

“I take pride in selling the customer the machine that suits their needs, not the one with the biggest profit margin, because I value repeat business from happy customers,” he explained.

“I talk to the customer, find out what they want the machine for and then point them towards the right machine for the job, or take it out to show them. I usually take two or three machines and help them choose, but I don’t sell anyone something they don’t need and I never oversell.”

It’s an approach that seems to pay off, with an impressed John Dinnis just one example of a new customer who approached Pressure Clean as a result of a friend’s recommendation.

Pressure Clean is highlighting the success of the range by offering a special deal on the MH 3M-100/600 PA model, part of a range that can tackle anything from tractor and yard cleaning to dairy parlour hygiene.

Gary believes that Nilfisk – a Danish company with a focus on quality – is benefitting from a change in the attitude of farmers that reflects the current economic climate.

“In the past some farmers would change their pressure washers every few years just because a new model caught their eye, but with today’s focus on costs, people are more interested in longevity,” he said.

“They want their money to go further and their machines to last longer, so reliability and build quality is more important than ever. In a price and quality-driven market, Nilfisk comes out on top.”

Farmers who have been around a few years will also be aware that Nilfisk is the reincarnation of the Kew brand that was much loved by the agricultural world. “Once they see a Nilfisk demonstrated they realise that their favourite machine is still being made but now wears a different badge,” Gary explained.

Pressure Clean’s service department is also being kept busy, partly as a result of the maintenance agreements that Gary introduced in 2015 to allow customers to benefit from a fixed-price deal and avoid unexpected bills.

Increasing demand from the food industry for specialist cleaning machines and floor care equipment is also contributing to what looks set to be a good year for the Crawley business.