» The vanguard of long-term storage technology 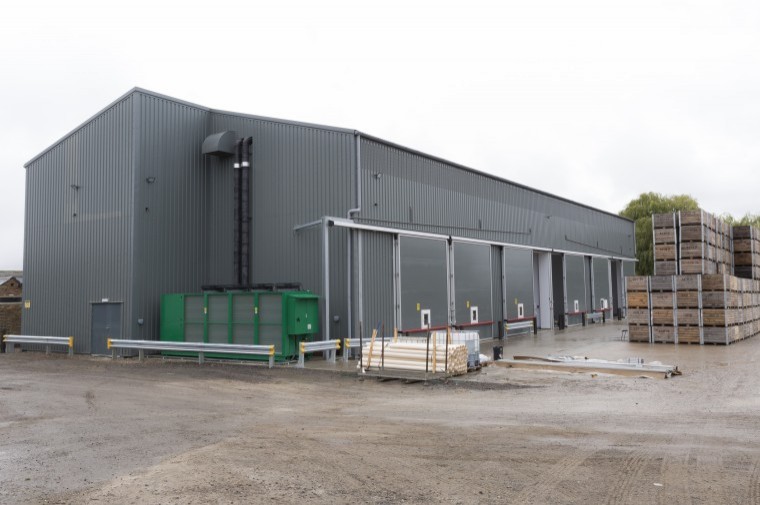 Part of a wider 4,000-acre mixed Hulme family farming enterprise, the fruit operations based at Hoaden Court Farm, on the outskirts of Ash, near Canterbury, Kent, have seen significant investment in the last decade.

Although the Hulme family have been farming the land at Hoaden under a tenancy agreement since 2004, it was not until they purchased the site in 2008 that work began on transforming and improving the operations.

Returning to the business from a career in London, Tom Hulme now manages over 150 hectares which is divided between around 90 hectares (ha) of apples, 30 ha of pears and 30 ha of stone fruits, including cherries, plums, and apricots.

While there are no plans to increase the orchard area, there is now a clear focus to improve the crop size and quality by replacing less productive elements of the farm with better varieties and clones which can produce higher yields and are more attractive to the consumer.

“In the face of rapidly increasing labour costs, one of the ways to ensure that the business survives is to improve yield,” said Tom Hulme. “The fixed costs of pruning and spraying, for instance, are the same regardless of how many tonnes per acre you are achieving. We are operating in a market place where price inflation is notoriously difficult to achieve so we need to be growing more apples per tree to reduce relative costs.”

With high yielding varieties being planted, Tom is hoping to achieve 65 tonnes per ha for his apples and remarkably the farm’s orchard of early Gala clone, Royal Beaut, hit 82 tonnes per ha last year and is set to reach similar figures this year.

In light of these outstanding figures it is no surprise that this is the orchard which recently received the East Kent Fruit Society’s accolade of Orchard of the Year 2018. In the annual orchard competition Hoaden Court also received the Hygiene award, first place for its Gala, and was named the Most Commercial Orchard, the Best Pear Orchard, and the Best Orchard Under 1,000 Trees Per Acre.

“It is a huge achievement for the farm and it is nice to be able to say to our team that we did very well in the most important competition in this part of the world,” said Tom. “We are particularly pleased about the pears because we have put a lot of effort into the new growing system and it does look really amazing.”

The 10-hectare v-system pear orchard in question was planted just three years ago. Despite being incredibly costly and labour intensive to establish and manage, Tom believes that it is easily capable of consistently producing 50 tonnes per ha each year. With the 2018 growing season’s ideal conditions, this young orchard should produce in excess of that this year.

“I would like to think it could produce 60 tonnes per hectare in a good year,” said Tom. “It might be more intensive and a heavy initial investment but I can’t see a downside to it and if we can grow 50 tonnes per hectare consistently for 25 years then it is a no brainer. The structure should last 50 years and my only concern is whether or not it is suitable for robotic pickers, but we are quite a way from that technology being readily available anyway.”

With the continuing goal to drastically increase the output of the orchards, A C Hulme and Son has consequently needed to implement a long-term plan to invest in the fruit operation’s infrastructure and storage to deal with larger volumes of fruit.

In 2014, Tom embarked on the first stages with the construction of new cold stores, which were further extended in 2016. In April 2018 work commenced on a new block of stores with the capacity for approximately 3,000 bins, or around 1,000 tonnes of apples.

“Additional storage is critical to our business because we have reached a point where we have a substantial amount of fruit and need the right facilities to look after it for a long period of time,” said Tom.

It is hoped that the final stage of the overall building project will see the construction of a new pack house in 2020. If this goes ahead, Tom believes that it will be the last step in creating a sustainable business, removing the farm’s current reliance on third party pack houses during the busy promotional periods.

This year’s newly constructed cold stores have been fitted with world-class dynamic controlled atmosphere (DCA-CF) technology. DCA-CF has been proven to effectively improve long-term fruit storage capabilities by reducing the level of oxygen present in the store and Tom has opted for the Italian manufactured Isolcell Harvest Watch system, introduced and supplied to the UK fruit industry by UKCA Ltd.

“As an industry we need to explore all the options to provide the best quality product that we can,” said Tom. “If you keep fruit in 1% oxygen and it keeps very well, imagine how it will do at 0.5%. It will be 100% better and that has to be significant.”

The DCA-CF system works via multiple Harvest Watch sensors inside each store, which closely monitor for stress within the stored fruit. This enables the operator to tune and control oxygen levels precisely at a safe but critically low percentage for that specific product. The system keeps stored fruit at a minimum respiration rate via very special CO2 Adsorbers and inert gas systems controlled cohesively by Isolcells Isosoft software ensuring valuable stored crops always have sufficient oxygen to achieve maximum natural storage potential.

As well as protecting the quality of fruit kept in long-term storage, the ability to supply consumers with British apples all year round is something Tom is particularly passionate about and he believes that the DCA technology is vital for any forward-thinking large-scale grower.

“We are growing more apples and are in a better position to serve our customers for longer,” said Tom. “There is now the technology available to allow us to do that and while I don’t necessarily need DCA today, I absolutely will in five years’ time because by that point I think we will need to look at taking apples into June and potentially even July. I am investing in DCA now to find out how it works and how good this technology is for the entire industry.”

On time and on budget

Appointing the specialist installations division of Thurlow Nunn Standen Ltd (TNS) to manage the 2018 DCA cold store project, from the planning process right through to completion, ensured that everything was delivered on time and on budget, with the £1 million build being officially handed over in early September.

“The individual subcontractors all performed exceptionally so the programme ran smoothly,” said Jeremy Nunn director at Thurlow Nunn Standen. “While it is a typical store design, there were some challenges with the topography to overcome. To allow for on-going site development, we needed to make sure the building fitted in the space left following the demolition of the old cold stores. Tom was pleased with the solutions we presented to resolve that, and we carefully managed to shoehorn everything into quite a tight space.”

As well as taking the future development of the yard into consideration, the cold store was designed to replace an extremely inefficient, unreliable, and small 600-bin unit which was constructed in the 1960s.

“The old stores were just for short-term storage,” said Tom. “They were difficult to load and not very powerful so it took longer to bring the temperature down. The new block is the top of the range, with a budget to match. It has cost approximately 30% more than the last time we built a substantial block of cold stores in 2014, but the spec is significantly higher, and the building is smaller, so it was always going to be more expensive.”

A bespoke steel frame, manufactured and constructed by A C Bacon, encloses six 450-bin capacity stores and while early plans included a bay for a small farm workshop within the block, working with Jeremy, Tom decided that this would be inefficient use of additional cold store space and another building at Hoaden Court has since been earmarked for this function.

Originally designed as a dedicated pear storage block, the concrete floor, laid by Rhys Parry has been well insulated. However, having chosen to invest in cutting-edge DCA technology, which has not yet proven to be beneficial for long-term pear storage, the block will now be used exclusively for apples.

As DCA works by reducing and controlling the levels of oxygen present, ensuring that each bay is sealed is a vital task. As well as aligning the walls over the saw cuts of the concrete floor, Tom has also had steel girders fitted around the skirting of the wall to prevent forklift tines from hitting the wall and degrading the seal over time.
Sophisticated Salco pneumatic doors, which are quick to set into position and seal, have been installed by GPL Construction and will sit on a strip of resin, instead of concrete, to give a completely flat surface.

“I have already learnt with my other DCA stores that a 0.5% oxygen level is hard to maintain,” said Tom. “I am hoping that these small changes will give us the best possible chance of preserving a seal and will enable us to control the oxygen levels more efficiently.”

To increase efficiency, refrigeration fans, provided by Orchard Cooling who also completed the electrical installation, have been incorporated at the front door end of each bay facing towards the back wall, so that once the store is filled and chilled, if it is opened it will require less to push cold air back into the space.

“Orchard Cooling has also added a huge fridge pack with a 400 amp supply,” said Tom. “It is far more than we need but it means that we could fill all six stores with hot fruit, straight from the orchard in a week, and then cool all six bays down at once. As well as direct expansion air conditioning (DX) we also have glycol in the pipework. This is a big step forward compared to what we had before and I think it is going to be much quicker and more effective in bringing the temperature down.”