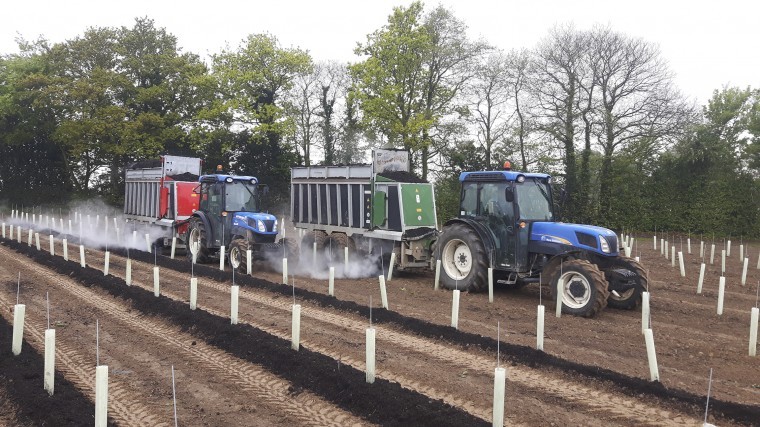 When Steve Pack began selling lime on commission he took an unusual approach to his new job – and virtually trebled the company’s Kent sales in the first year.

Intriguingly, that new approach was based not on selling customers more lime but, in many cases, on selling them less.

With a long-held interest in soil science, Steve knew that lime only has any real value when it is spread in the right areas, and can be detrimental if added to already neutral or alkaline soil. He used GPS soil mapping techniques from day one and then sold his customers what they needed.

“In many cases I was doing myself out of commission because I was selling farmers less than I could have done, but it was a more scientific way of doing things and it paid off in repeat business, recommendations and the reputation I built up for offering a good service and saving farmers money,” he explained.

What makes the story even more remarkable is that the GPS equipment was not supplied by the company he was selling for but was kit he bought himself so that he could do the job properly.

And while individual farmers were buying less, Steve’s total sales rocketed. Four years into the job he was selling around nine times the volume the company’s previous agent had sold.

“I am passionate about soil science and determined to help farmers get the best possible yield from their crops,” said Steve, who went on to set up Steve Pack Agricultural Services in January 2016.

The company provides a complete liming service to both arable farmers and fruit growers, using comprehensive GPS mapping to make sure that the right nutrients are added in the right places. His team can supply and spread lime, renewable fertilisers such as meat and bonemeal ash, conventional fertilisers and organic soil improvers including compost and chicken manure.

Steve Pack Agricultural Services has its own fleet of vehicles and a number of specialist spreaders, including a narrow Landdrive spreader for fruit orchards that was built to Steve’s own specifications.

Originally from Hertfordshire, Steve quickly spotted the potential offered by the fruit industry when he saw the number of orchards in Kent, and so he made sure he could offer growers a specialist liming service.

“I believe I was the first contractor to offer variable rate lime spreading to orchards in the UK, and my customised Landdrive spreader has the spinning deck sited lower than usual so that the lime goes under the canopy and doesn’t affect the leaves,” he said. “I can also keep the lime off the central grass strip if necessary.”

Steve’s services to fruit growers have since expanded to include compost supply and spreading and GPS fertiliser spreading.

It was while selling lime as an agent back in 2011 that Steve realised many of the farmers needed someone to spread the product they were buying from him. He first hired and then bought the necessary equipment from his brother David, who was doing a similar job in Hertfordshire, and the following spring he bought the custom-built, 1.3m wide Landdrive.

Steve was the first to import these impressive compost spreaders into the UK after a long search for machines of the standard he required.

“I have family in Holland, and after a couple of years of looking all over Europe it turned out the factory which built exactly what I was looking for was just 1km away from where we stay every year,” he said.

“I had even cycled past it several times without realising it was there.” A visit to the factory resulted in an order for the first machine of its type on English soil, followed within a year by a second.

Steve continued to sell on commission while also spreading the product for his customers until last year, when his supplier was taken over by one of the agronomy ‘big boys’. “I have no problems with the company I used to sell for or the company that took it over, but I didn’t want to be part of a huge business model and so I took the plunge and went independent,” he recalled.

The past 18 months have been challenging and busy, but with Steve Pack Agricultural Services continuing to grow its impressive customer base, Steve is delighted that he made the move.

His efforts were in part rewarded when the company won the Chris Smith Award for the Best New Exhibitor 2017 at this year’s Agri-Expo 17 show in Detling, but Steve’s main reward comes from helping farmers achieve the best results from their land.

“PH is the building block of soil science. If the pH is wrong, it affects the availability of all other nutrients,” he commented – and he should know; his first class degree in agriculture from Harper Adams University reflected a dissertation on soil amendments – essentially the process he now puts into practice.

Despite the science, some farmers continue to take an average reading from a few samples and then spread the same amount of lime over the whole area – a dated practice in Steve’s view.

“Taking an average and spreading lime based on that value simply means that some areas get too much – which is wasteful and expensive – and others don’t get enough. Any area that gets the right amount is just lucky,” he said.

And there is a bigger problem with bulk samples sent for lab analysis. “Balancing alkaline and acidic soils to come up with an average is one thing, but if the sample includes even a small amount of chalk, that can completely neutralise the sample and render the whole exercise a waste of time by giving misleading results.”

Instead, Steve takes hundreds of samples across a block of land and then produces a GPS map that can be ‘read’ by the spreader, ensuring the right nutrients end up in the right place.

And while there can be a small cost involved in obtaining the data, the overall package almost inevitably works out cheaper than flat rate spreading. “If you find you only need to treat 140 acres of a 200 acre block of land, you might save two tonnes of lime per acre times 60,” Steve explained. “That’s a lot of cash – and the land will be better for it.”

With most of the work seasonal, Steve also bought a specialist track-crushing machine to keep the team busy in the winter months. The impressive bit of kit can take up a rough, rubble-built track, crush the component parts and relay it as an acceptable, level pathway.

“Some farmers are jolting tens of thousands of pounds worth of highly specialised equipment down access roads that resemble the surface of the moon,” Steve explained. “This crusher is an inexpensive way of turning large lumps of rubble into a reasonably smooth track.”

Meanwhile the main part of his business continues to grow apace, with farmers increasingly persuaded that precision spreading is the way forward. “Put it this way,” Steve concluded. “Liming is a service that needs doing every few years, and so far I have enjoyed a high level of repeat business.”