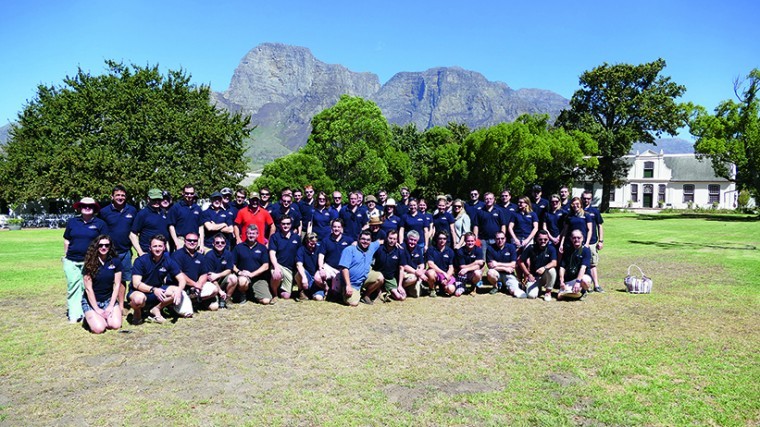 Led by Charlie Dunn, the group’s chair for 2015 until 2017, 55 delegates did the week long trip which was a mix of fact finding and networking. While previous European trips at a fairly quiet time of year for British growers have always been informative, heading to the southern Cape gave delegates a chance to see farms harvesting and packing fruit.

“This was a pretty enormous proposal because we had never done anything like it before,” said Charlie Dunn, who helps run his family’s Chandler & Dunn farming and fruit growing business in Kent. Charlie was chosen for his two year term chairing the group during the Under 40s’ last conference to the Benelux countries – Belgium, Luxembourg and Holland – in 2015. “As it was a special anniversary and there was a bit extra in the bank, we thought why not? With kind help from our sponsors, we gave the young growers a subsidised treat.” The sponsors’ support is “highly valued and important,” said Charlie, and gave the group help in taking young growers “at a well discounted rate.” The Under 40s is free to join and the only time delegates have to pay anything is on a trip subsidised by sponsors.

Out of the 55 who went to South Africa, 37 were growers and the other 18 were sponsors and representatives from various parts of the horticultural industry. Many of the latter were over 40 and acted as a valuable source of experience for young growers such as Tom Beech from Harper Adams University in Shropshire and Will Jarvis from Hadlow College in Kent. Sponsorship allowed all the young growers to fly, travel, stay in hotels and have meals for just £450.

“Growers can become a bit insulated in their work,” Mr Dunn said. “But this trip gave them a chance to network and talk to people about what they do from day to day.” They also had the opportunity to shine in many other ways which could mark them out as potential committee members in future.

The group does other trips closer to home in the intervening two years, and there is a scouting trip before the big one to fine tune the planning. The committee used its contacts to make sure everything lived up to expectations for the fiftieth anniversary. Verity Garrett, sponsorship secretary for the 2015/17 committee, used to work for Tesco before she returned to the family farm, and she had some useful contacts. John Guest, known as the apple man, put the committee in touch with Angus Davidson, the owner of Haygrove Ltd, and the delegates visited Haygrove Heaven in the Hermanus area of South Africa. As a result of all the help and advice, the trip was “surreal,” said Charlie, because while fruit trees are dormant in the UK, the delegates were standing in South African orchards looking at apples, pears plums and apricots.

Starting in Cape Town, the visitors went to three different areas in South Africa – Ceres, Hermanus and Stellenbosch. All have different micro climates and weather patterns, so the horticulture varies, too. “We tried to give delegates an equal split between top, soft and stone fruit,” Charlie explained. “We also gave a range of hectarages between 35 ha and 4,000 ha.” In South Africa, Altus and Dirkie from DPS were “very helpful” in organising some of the visits, Charlie added.

One of the organisations they visited was Fruitways run by Alastair Moodie and his son Chris. “They pack more than 300,000 bins of apples a year,” Charlie said. “Each bin holds 310 kilograms and they can do up to 1,000 bins a day.” They also saw growers producing dried pears, and a grower with a number of customers had built a jam factory to take his waste fruit. Other visits went to Goosen Farming and Boschendal, one of the oldest wine estates in South Africa.

“One of the most spectacular sights was the Moodies,” said Charlie. “Grading 1,000 bins a day is mind boggling.” The most unusual sight was probably the jam factory. “We should be thinking off the back of that about the principle of adding value to what we do.”