» From field to fork 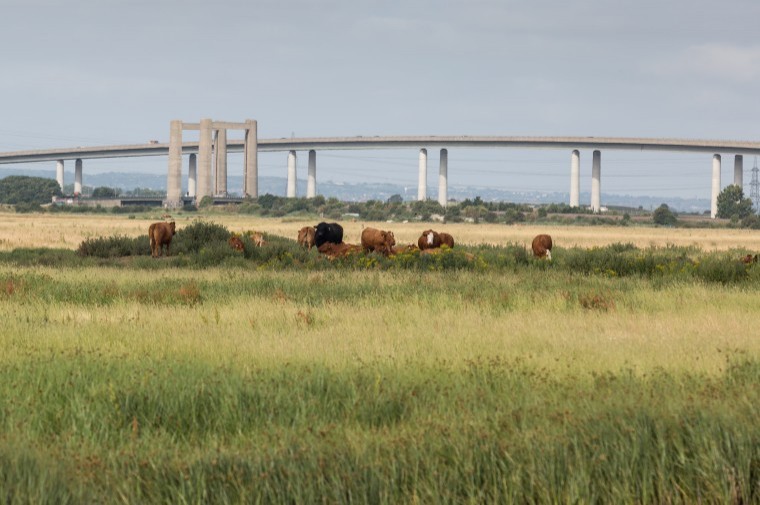 On 5 November 2000, the Burden family took over the Ferry House Inn located in the secluded hamlet of Harty on the Isle of Sheppey.

The project was in part driven by Mavis Burden, a farmer’s wife looking for something to get her teeth into after her children had left home, and in part by the fact that, if the pub wasn’t successful, the beautiful, albeit rundown, 16th century inn could be renovated and converted into an ideal family home for one of the Burden brothers.
Today the site has been lovingly converted, but not into a home. The bar and dining area has been completely transformed, a traditional Kent tile barn extension was added for wedding ceremonies and work is currently progressing on a new kitchen, a butchery and a six-double-bedroom accommodation facility.

“When we took over that bonfire night we could instantly see that the pub had a very good following,” said Alex Burden, Burden Bros director, who manages the Ferry House Inn along with his wife Victoria. “The fireworks display attracted over 500 people and showed us there was a huge potential here.”

Considering that both farming and hospitality are 24/7 industries, the Burdens were not afraid of the transition between agriculture and running the pub and over the past 18 years have strived to increase the link between the two, successfully creating an ultimate foodie destination which offers a unique field to fork dining experience.
The key element within this, is the synergy between the Ferry House Inn and the Burden’s family farm, Old Rides Farm, which is situated just up the road from the pub and supplies the restaurant with high quality beef.

As well as farming 1,800 acres of their own ground, the farming branch of Burden Bros looks after an additional 8,000 acres, with the total area equally divided between arable and pasture for the farm’s herd of 850 suckler cows.

Believing that happy cows produce better tasting meat, the suckler herd is only grazed on large, open areas of conservation ground, including two bird reserves Elmley and Swale. In an ideal partnership the cattle in turn help to create the perfect habitat for the wild fowl as they leave varied lengths of grass.

“It is a perfect combination,” said John Burden, Burden Bros director and farm manager. “The cows are only brought in from January to April, so that we can oversee calving and to prevent the conservation ground from being damaged. But even when they are in they are still being fed hay which is produced on the bird reserves, as well as chopped maize and grass silage which is all produced on our own farms.”

Now in the ninth year of breeding from their own stock, by next year all Burden’s cows will have been produced on the farm, with breeding bulls only bought in if a new bloodline is required.

“200 new heifers have come in this year, and as the cows get to 10 or 11 years old they get culled, so we have a rolling stock,” said John. “We chose mainly South Devon and Aberdeen Angus and are crossing those with Aberdeen Angus and Limousin bulls. We chose to combine the two breeds because the Angus is a global ‘brand’ and well known for its quality meat and the South Devon provides a large frame to hang that meat on.”

As well as beef, the farm employs a full-time game keeper and pheasant, partridge, duck, rabbits and pigeons are all also supplied to the restaurant.

In a unique venture, Burden Bros has also partnered with Chatham-based distillers, Copper Rivet who purchase grain from the farm, send it off to a maltster and then distil it to produce a range of gins and vodkas which are sold at the Ferry House Inn. The waste products from this process, including the spent grains and molasses, are also sent back to the farm to be included in the cattle’s feed rations.

“It might be distilled off site but we believe that we are the only pub or restaurant in the country who could say that they ‘grow’ their own gin,” said John. “To take things one step further Alex also picks a lot of hedgerow wild fruits, such as sloes and damsons, and will infuse that with the gin to produce an aperitif.”

In a bid to keep everything as in-house as possible, even the manure from the cows is sent down to the Ferry House Inn to be put to good use in the expansive kitchen garden.

While the mind may conjure up images of a few beds of herbs and the odd seasonal vegetable, the kitchen garden is in fact a comprehensive allotment with a diverse array of plantings, a greenhouse, polytunnel, caged off fruit area and orchard, all of which is managed by three full time members of staff.

“The garden is always a work in progress,” said Vitalijs Kaneps, head chef at the Ferry House Inn. “It started to take form in 2016 when I bought some potted salads from a farmers’ market. Everything is served fresh and picked just one or two days ahead. It allows our seven chefs to see how everything grows and learn when to use seasonal ingredients. There is more respect for the food too, so they become more inventive with the dishes. Being located where we are means people aren’t just going to drive past, so we needed to find a way to entice people here and things like this get people talking.”

With an extensive choice of fruits and vegetables grown on site, to best reflect what is coming into season the specials menu is changed monthly. Alongside the dishes, several cocktails have been designed to make use of the garden’s herbs, such as chocolate mint. Wild flowers are not only grown to encourage biodiversity, but are also then cut and used for table decorations.

“We try to ensure that 80% of what’s on our plates comes from the kitchen garden or the farm and the other 20% is then sourced as locally as possible,” said Jane Murtagh, general manager at the Ferry House Inn. “Our eggs are supplied by Guy Burden’s children. They are only aged six, nine and 12, but they have their own free range chickens, which they are completely responsible for. They are British standard registered and we now take around 700 eggs per week.”

Even the chestnut fencing which is currently hiding the building work (which is being completed by the construction arm of Burden Bros) is local sourced from Torry Hill.

The focus on using local producers goes much further than serving customers food with provenance and while each of the Burdens Bros businesses all operate as individual companies there is a lot of collaboration between each of the branches.

“We try to strengthen the relationship with our suppliers as much as possible,” said Alex. “If you take Biddenden Vineyards for instance, the agri side of Burdens has sold them tractors, two of their sons have worked within our agri and farm businesses and we purchase drinks from them for the hospitality side. We try to ensure that it goes full circle in every possible way.”

As a farmer-owned pub, with a team of well-trained staff who are naturally invested in the provenance of the food and drink they are serving, the Ferry House Inn is in a rare position when it comes to being able to educate the public about the link between food and farming and from a visitors’ experience, being able to listen to the story behind their meal really adds to the memory of dining out on the Isle of Sheppey.