» Excited about the future 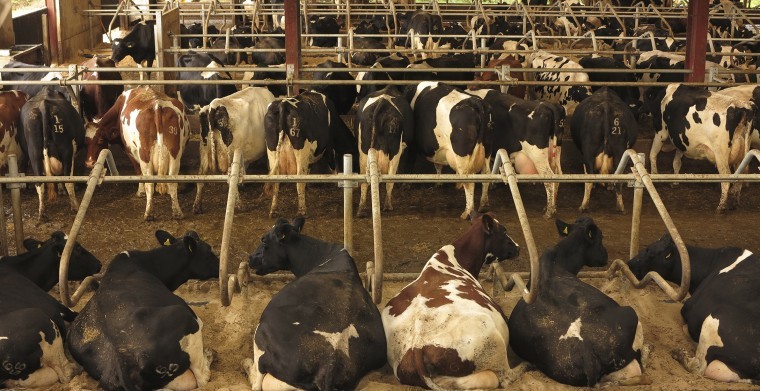 It takes commitment, energy and new thinking to make a success of modern dairy farming – and that means getting the next generation on board.

For Richard and Janette Thornton, of Heathtolt Farm, Maplehurst in Sussex, the fact that their children were enthusiastic about taking the business forward was enough to persuade them that the family farm had a bright future.
What that future depended on, though, was investment – and that’s the contribution they decided to make.

“We were at the point where we knew we either had to sell up and leave dairy farming or invest a fair amount of cash in newer and more efficient equipment that would allow us to compete in a tough market,” recalled Janette.

“What made the difference in our case is that the youngsters – our daughter Hannah and son Robert and our herdswoman Hayley Williams – were keen to see the business continue and excited about the future.

“It was their enthusiasm and drive that persuaded us to invest in new buildings, better housing for the cattle and, crucially, a much more efficient parlour that would allow us to milk faster and increase the size of the herd.”

When it came to choosing the parlour and the company to design, install and maintain it, there was no real choice. The Thorntons were already big fans of WestfaliaSurge, now built by GEA, and had relied for many years on the support of dairy specialists Negus Chase, of Staplehurst.

“Westfalia is reliable, German-built and well engineered,” explained Richard. “It does the job well and you know it’s built to last with a substantial feel and finish. I wouldn’t have wanted anything else and I wouldn’t have asked anyone else to install it.

“We need reliable back up and maintenance and that’s what Negus Chase have proved they can deliver over the years. They first did work on the farm in 1989 and we have used them ever since.”

As Janette added: “We were also looking for continuity. We invested in the farm because we knew the children were enthusiastic about continuing in dairying and so we wanted a company that would still be around to support them in the future. Negus Chase has a similarly enthusiastic young team that is equally keen to take the business forward.”

The new parlour, housed in a new building provided by J D Richmond and Son, has allowed the family to grow the Holstein/Friesian herd from 140 to 230 dairy cows while reducing milking time significantly.

The WestfaliaSurge 24/24 herringbone low level parlour with milk meters has taken throughput from 50 cows an hour to an impressive 100 cows per hour, helped by another addition, a backing gate that has knocked an extra half an hour off milking.

Negus Chase has also installed a more efficient milk plate cooler and a variable speed vacuum pump, efficiency measures that have seen electricity bills at Heathtolt Farm drop by a remarkable 40 per cent despite the fact that the family is milking nearly twice as many cows twice as quickly.

“Everyone understands that the industry is under pressure, but in a sense, tough times teach you important lessons,” said Janette. “We have looked hard at the business, made it more efficient, cut costs and put it in good health for moving forward, supported by the next generation of enthusiastic dairy farmers.”

The family business began when Richard’s parents, Geoffrey and Nora, started out with 12 Ayreshires at Loxwood, near Billingshurst, in 1957. The Thorntons still have a small herd of pedigree Ayreshires and are now Arla members on a Tesco contract.

The expansion at Heathtolt Farm saw J D Richmond and Son add a new cubicle shed and the parlour to the cattle housing, effectively turning the building from one bay into three. At the same time they replaced loose housing with new sand cubicles throughout.

The work included a new slurry lagoon and was praised by Negus Chase directors Philip Bridges and David Twyman, who started the company in 1984 and have worked together for 42 years.

“We have often worked alongside J D Richmond and they impress with their professional approach,” said David. “It’s a good team to work with.”

As well as being enthusiastic about the future of dairy farming, Hannah (24) and Robert (22) played a significant part in planning the new parlour, including persuading Richard to go for a 24/24 layout rather than a swingover option.

Both have had spells working on other dairy farms and were able to contribute to the debate over the best way to ensure the future success of the family farm. “We wouldn’t have invested in the dairy without knowing that the children were passionate about continuing and without listening to their views,” added Janette.

The herd, which is currently producing between 7,500 and 8,000 litres per lactation, is mainly block calved from mid-August to the end of October, with a much smaller spring calving block.

Negus Chase specialises in delivering bespoke solutions for dairy farmers and prides itself on a high level of customer service. “We design, sell, install and maintain anything a dairy business might need,” said Philip. “From storage silos and milking and slurry equipment to chemicals and consumables.

“We like to be involved in a project from the beginning so that we can sit down with the farmer, look at what they are trying to achieve and then help them come up with the best way of achieving that goal.”