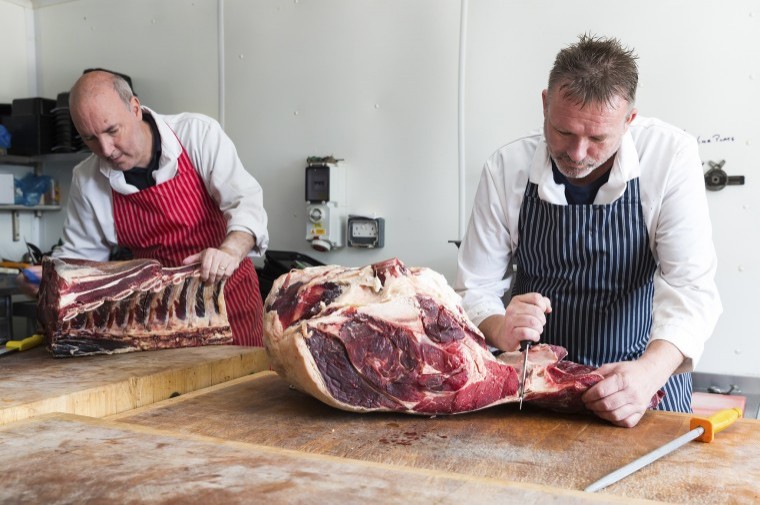 What has diversifying into the processing and retail sector done for farmers? Well, if the thought of cutting out the retailer and adding value to farm produce isn’t enough, why not consider the job opportunities; the chance to bring life back to a redundant agricultural building; the ability to engage with the local community; and the opportunity to teach about where food comes from and its value.

South East Farmer caught up with the Joneses, who opened Harvel House Farm Shop in 2008 on their family farm just outside Meopham in Kent, to tap into a decade’s worth of expertise in the processing and retailing side of farming.

“The farm shop wasn’t planned, it just happened,” said Stephen Jones, owner of Harvel House Farm Shop. “Farming 600-acres, split between grazing and 400-acres of arable, means we are too small to cut it as a commodity producer so we either had to sell up or find a way to make a lot more from what we had.”

The farm began to produce boxes of meat, with animals going straight from the abattoir to a butcher, who cut and returned the meat ready for sale. However, this became unviable after a change in regulations meant that carcases had to be sent to a licenced cutting room.

“We decided that the best option was to put in our own cutting room,” said Stephen. “We found a good butcher who was willing to help and we started converting our old stables. We soon realised that we might as well add a counter and a kitchen area and it quickly escalated from the original idea.”

Regardless of the fact that they have managed to develop a busy business which is now at the heart of the local community, the family remain modest and down-to-earth about their award-winning farm shop which now employs a team of 16, including three full time and one part time butcher, alongside Stephen, his wife Joanne and their two sons, Trevor and Jos. So what makes it so successful?

Having approached the shop as a ‘vertical integration’ and extension of a traditional farm gate style offering, over 80% of the produce stocked in the shop comes direct from the farm, with meat being the main attraction.

“We do have to buy a few things in and go further afield for some items to make sure it’s the best quality,” said Stephen. “To avoid stepping on people’s toes, we have also avoided producing anything which can source locally, such as free-range eggs.”

As well as the quality meats on offer, customers also enjoy a selection of home baked goods, which are often creative and totally different to anyone else’s offering.

“Our cakes are not just something you could buy in the supermarket,” said Jos Jones. “Having a farm shop is not about looking at what will make money, it’s not about putting gingham on just anything, and it is certainly not about copying someone down the road. Too many farm shops focus on fancy jams, but you don’t need to do that.”

While concentrating on their own produce enables them to select the best quality for their customers, the amount of ‘home-grown’ stock which is sold also dictates whether or not planning permission is required.

If the majority of the produce you are planning to sell is going to be produced on the farm, and if you have an existing building, planning will not be needed which is beneficial when it comes to looking at business rates and inheritance tax relief.

“If you are looking to start a farm shop, get in touch with your council and find out what their policies are,” said Stephen. “Different councils treat agriculture differently and can choose what percentage of your own produce you need sell.”

If you are planning to focus on processing and retailing meat, it is important to factor in the extra farm time it will take to look after a diverse range of animals to meet customers’ expectations, as well as the time needed to pick and deliver stock to slaughterhouse.

Profit is in the pieces

One of the best ways make sure a meat processing and retailing enterprise is viable is to find a way to deal with the with the pieces after you have sold the roasting joints and the steaks. This ethos was the driving force behind the decision to add a kitchen to the farm shop, which has provided a space for Joanne to produce her range of pies.

“The butcher who set us up always said that the profit was in the pieces,” said Stephen. “Pigs are great because what doesn’t go out as chops at £6.79 per kilo can go into sausages at £6.99 a kilo, but if you have to take the top layer off a sirloin steak at £21.79 per kilo and it has to go in the mince at £7.49 per kilo you are losing money on it.”

As modern society moves away from spending hours in the kitchen, farm shops should also be prepared to cater for customers who want quick meal options. While roasting joints and steaks are still popular, Stephen has now dedicated over 25% of counterspace to value added products, such as ready meals, stir fry mixes, kebabs and pre-marinated meat.

“Pigs in blankets are a funny example,” said Stephen. “At Christmas time we will make around 5,000 and package them in foil trays ready to go in the oven. It’s not difficult to make pigs in blankets and it’s cheaper for people to buy the bacon and chipolatas separately, but they only want to buy them ready made.”

While profit is important, in order to keep customers coming back, quality and service should always come first, and pricing should be carefully considered and kept as close to the supermarkets as possible.

“You cannot say that you need to be more expensive because you have cut out the middleman,” said Stephen. “We don’t make much on the wholesale price of meat, but if you look at how much the farm could sell a bullock for and how much we would have to pay for it wholesale, there is a £200 difference and that bit, which normally disappears through the chain, is what we are making.”

While today’s customers often don’t understand prices per kilo and compare everything to supermarket pack sizes, if you are offering good quality meat, customers will soon learn that they are getting more for their money.

“No matter how much something is customers will tell you it is expensive,” said Jos. “They will tell you they can get so many packs for the same price, but they don’t know how much is in a pack. They forget that the cheap meat they are buying is pumped full of water, so our bacon might be more expensive, but when its cooked, it stays the same size and actually costs them less.”

Offering trade discounts and supplying a few local pubs and restaurants in the area can seem an attractive way to help to spread the word about the shop, however, Stephen warns that it can be far more effort than it’s worth.

“Chefs will want to cherry pick what you have got and will expect a discount,” said Stephen. “Then they will want it delivered and probably won’t pay for it for three months. You need to be hard-nosed to deal with them. We concentrate on the people who come into the shop to buy what we’ve got, don’t argue about price, pay on the way out and come in the following week.”

When thinking about profits, kitting out the farm shop doesn’t have to cost the earth and giving yourself plenty of time to source equipment and seek advice from organisations such as Environmental Health can help spread the initial expenditure.

“I would caution anyone against high capital costs because it is still a low margin industry,” said Stephen. “It took us three years to put everything together, but that gave us the time to find good second-hand equipment. Some companies will tell you that everything has to be stainless steel, but we contacted Environmental Health directly and they helped to set the shop up so that it was compliant without costing too much.”

Being patient, thinking outside the box and completing a lot of the renovation work themselves meant that the entire project at Harvel House initially came to fruition with just £40,000. Ten years on and Stephen’s only complaint is that the cold store is no longer big enough to deal with demand.

Alongside the demand for quality produce and recognition of fair prices, customer loyalty has largely been built on the high level of service which the Joneses pride themselves on.

“It doesn’t matter how big the queue is, you have to treat customers as if they are the only person in the shop,” said Trevor Jones. “You can’t rush them just because you are busy. We also have a written celebrity policy in the shop which is simple – there is no such thing as a celebrity and everyone gets treated exactly the same.”
Any farmer looking to delve into a processing and retailing enterprise should be comfortable with and happy to deal with the public; if being tolerant and delivering exemplary customer service are not in your skillset, it would be wise to look at alternative diversification options.

Offering a bespoke cutting service, helping customers with recommendations, getting to know people and following trends, such as tomahawk steaks, also keeps locals coming back regularly.

“We see the same faces most weeks,” said Trevor. “And that’s great because that’s where your money is. It’s not in someone turning up to buy 400 steaks for a one-off party. It is reliability of those who come in to spend a bit every week.”

Developing a relationship with customers will not only provide an experience they are unlikely to receive in the supermarkets, it can also help you to look after them better in the long run.

“People like knowing who they are dealing with and it’s important to look after them,” said Trevor. “Last week, our ribs were disappearing quickly because it’s BBQ weather. We have a customer who comes in every week for them, even in January. They hadn’t ordered any, but we put a pack aside. Customers really appreciate things like that, but you can’t go that extra mile unless you get to know them.”

“People are much more invested in the farm now that they shop here,” said Jos. “They are genuinely interested in what is going and if something isn’t right we will get a phone call quicker than we ever would have done before. We also don’t have to deal with people up to no good because our customers will already be moving them on.”

While the old adage dictates that you have to have quality, service, price and location, nailing the quality, service and price helps to make up for the fact that the farm shop is well off the beaten track.

Having said that, Stephen has also discovered that one of the advantages of being in the middle of nowhere quickly weeds out a lot of time wasters and people who are just looking for a day out.

With the shop located on site, the farm is always at the forefront of everyone’s minds which is integral in helping to educate customers about the connection between food and farming.

“We haven’t lost that visible link between the shop and the farm,” said Jos. “Customers love being able to see what is happening on the other side of the fence and in their eyes the produce is a fresh as you can get.”

Click here to read more about setting up a farm shop