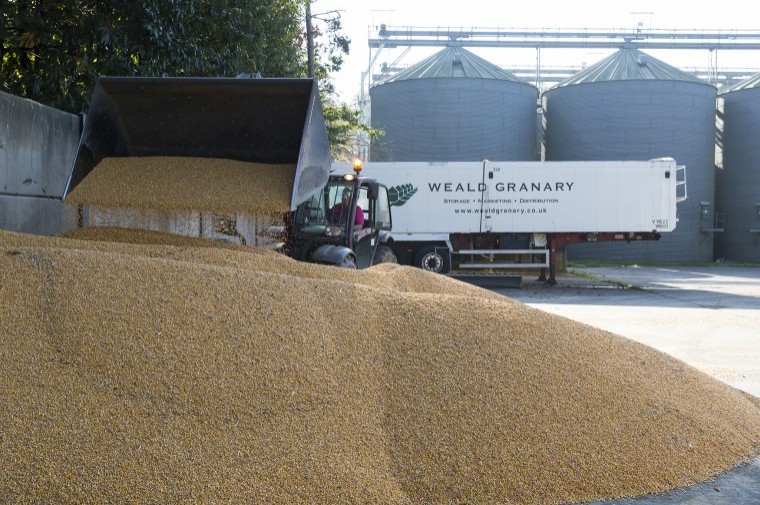 In 1987, to combat the amount of outdated farm storage rife across the region, 47 farmers banded together to create a co-operative grain store. Supported by SCATS, who could foresee a mounting requirement for more grain storage, 15,000 tonnes of specialist storage and drying facilities were constructed on a site in Mereworth, Kent.

32 harvests later and the Weald Granary business has over 180 members, handles around 100,000 tonnes of grain per year, and as is proving to be increasingly relevant to farmers’ needs in challenging markets and times of political uncertainty.

“Over the years the industry has seen many changes, especially to agricultural policy, which have affected the viability of farming,” said John Smith, managing director at Weald Granary. “We have been fortunate to see consistent, organic growth, generated through new members and by handling increased tonnages for existing ones. Today our economies of scale and focus on containing costs, adding value to our members’ grain, and managing risks and market requirements, ensures that we remain the most economic option for grain storage, distribution and marketing.”
Farmer-owned and flexible

As Weald Granary looks after a diverse range of arable and mixed farming enterprises of varying sizes, to join a farmer only needs to invest in a minimum storage entitlement of 30 tonnes. Currently, the average space owned per member is around 350 tonnes, although this figure is gradually increasing each year.

“The more members we have and the more grain we handle for them, the cheaper it becomes for everyone,” said John. “New members will often buy a small tonnage to start with. It is a great chance for them to be able to dip their toe and it is not long before they end up taking on more space.”

While one third of members send all their grain to Weald Granary, the majority use the central store alongside their existing on-farm storage. Members have ultimate control over how much of their grain is marketed via the store and benefit from the co-operative’s flexible approach to alter storage capacity to suit cropping requirements.

“Generally, farmers contact us with their requirements between March and June, however it is becoming increasingly challenging to predict what sort of season lays ahead,” said John. “Quite often we end up dealing with far more grain from the member than the storage capacity they own because we don’t want them to feel constrained.

Read more stories about this visit