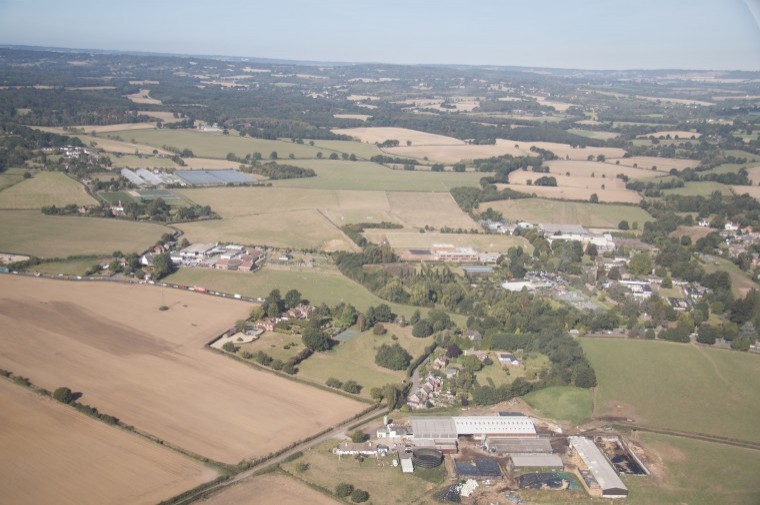 Following the union of the Sittingbourne-based Kent Farm Institute and the Swanley-based Kent Horticultural Institute in 1958, the search began for a site which was suitable to bring the two colleges under one roof.

In 1960, the 600-acre site at Hadlow was selected for its ability to grow the diverse range of crops needed to service both the agricultural and horticultural departments. Work quickly began on developing the buildings and amalgamating the equipment, machinery, livestock and supplies from the two colleges into the new base.

While the first students arrived in 1967, in 1968 the newly formed institution open its doors to residential students, a crucial facility as many students travelled from across the country to study at the college and early morning instructions often started at 5:30am.

“I had only been at Hadlow a month when the principal requested that I arrange a study tour, as it was included in the new OND syllabus that students had to experience and learn about continental farming,” said James Edwards.

“The first trip was the most memorable because it was a real discovery. For each visit two students had to take notes and then the group produced a final report when we got back, which in those days was submitted to Kent County Council. I also gave the students a project to find out the costs of things such as milk, animal feed and diesel compared to England. They needed to ask a lot of questions and I always had compliments from our hosts about how inquisitive the groups were.”

“I was on the first study tour and I remember it all,” said David Goff, former student, lecturer and head of department at Hadlow College. “It was pioneering. We had done study tours in this country but nothing like this. Around the same time, the government was thinking about joining Europe, so from an agriculture point of view the study tour was an opportunity to see, hands on, how they did things and different methods of farming. It was quite an eye opener.”

While the study tours continued to visit France, Germany, Belgium and the Netherlands, the trips evolved over the years to encompass other industries such as vineyard tours and wine tastings, flower markets and clock auctions, and museums.

“The first study tour was established when there were no faxes, emails or the internet,” said James. “Over the years the continental trip developed quite a lot. If we had a good agricultural advisor or host we would return to them the following year and I am still in touch with several people who hosted the tours in the 1970s. While we were away I used to ask if there were other good visits in the area and the next year we would include them. It was about building on previous years. It took me five years to hone the tour and get it to a point where it had everything I wanted.”

Tying in with lectures

Before joining Hadlow College as a lecturer in 1971, James Edwards had worked on the family farm in Wales, travelled under an NFU scholarship to America, graduated from the Royal Agricultural College in Cirencester and had worked for several years as a technical advisory for fertiliser company, Fisons.

With a wealth of industry experience behind him, James always went above and beyond to broaden students’ knowledge and alongside organising the annual continental study tours, he independently arranged many trips and student activities to further develop their life skills and understanding of the wider world.

“Many ex-students I meet at shows and ploughing matches always talk to me about the annual trip to the Paris International Agricultural Show,” said James. “We would leave on a Friday, visit the show, do some sightseeing and come back for the Monday. I charged £14.50 for the first trip and we normally filled two coaches.”

James also organised trips to see behind the scenes at Gatwick Airport, to see coal mining at the Snowdown Colliery in East Kent, visits to the London Theatre to see performances such as the Phantom of the Opera, the Two Ronnies and Evita, as well skiing trips, vineyard visits and wine tastings.

“It was about preparing us for life,” said David. “The majority of students came from agricultural or horticultural backgrounds and the trips James organised gave us the opportunity to see other things. I think it is a big compliment to James the amount of people who still remember the continental study tours and the trips to Paris.”

As well as providing students with practical and theoretical skills, fortnightly trips were also organised for students to tie in with lectures. Depending on which areas of agriculture students were focused on in class, James would arrange relevant farm visits, from vegetable farms to drainage contracts, potato harvesting, sugar beet production at Bury St Edmunds and Bore Place, Edenbridge, who were one of the first organic farms in Kent.

“One of my favourite visits was to the London markets,” said James. “We would leave Hadlow at 4am and head to the Billingsgate fish market to hear the bell ring for the start of trading. We would then visit Smithfield market and Covent Garden and later Nine Elms, arriving back at college by lunchtime. Stallholders were always very good to talk to students about their business, packaging, quality control and wholesale pricing and I remember students were particularly interested in the working practices and the influence of unions in the markets.”

Over the years, a strong network of local farmers allowed students to visit and do jobs on their farms and this support from the industry has helped the college to thrive.

“I would like to offer a huge thank you to the farmers for being so kind to let us and the students visit,” said James. “They spent their valuable time showing the students around and it was a fantastic asset for the college to have such a wide range of farmers to learn from.”