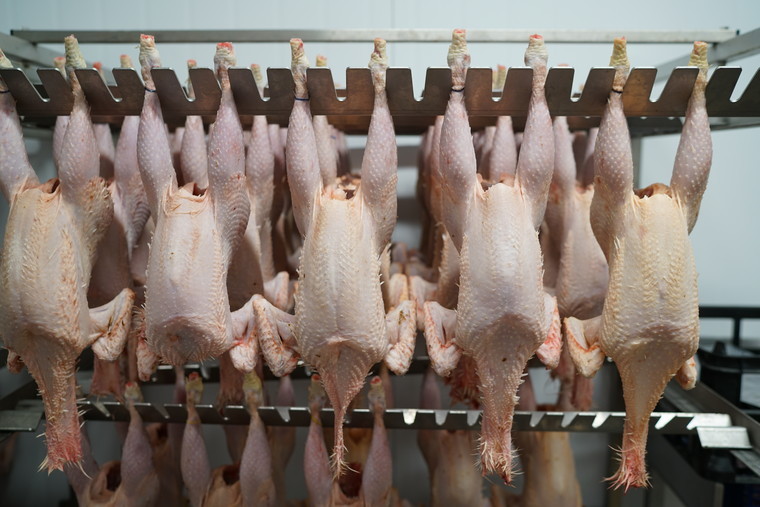 Arriving at Etherley Farm via a concrete farm track off Leith Hill Lane, I notice the busy campsite to my right, with a mixture of tents and camper vans dotted around the field. To my left I spot a flock of geese grazing in a paddock next to the farmhouse. I park up and head for the farmyard, navigating my way through a cluster of old and modern buildings and past a cold room to find the poultry processing unit, where I meet Charlie Keen wearing a butcher’s apron.

She tells me they have just finished eviscerating (disembowelling) their latest batch of chickens on a small processing line. It’s an impressive looking operation, all housed in a collection of old farm buildings that were once used for dairying.

Richard turns up and they give me a quick tour, starting with the lairage where the birds are housed before they are slaughtered. The room has blackout blinds which helps keep them calm, explained Charlie.

The birds are put on a line and stunned in an electric water bath before being processed on a series of machines operated by skilled workers. The birds are dipped in paraffin wax to aid dry plucking, a desirable but far more labour-intensive method compared to the wet plucking used by the larger scale poultry processors. The end product is finished by hand and well worth the extra effort.

“We rear all our poultry on a free-range system, slaughtering and processing them on site,” said Charlie.

It is a free-range system with Hubbard birds. “It takes around 12 weeks to rear from day old chicks before they are ready,” explained Richard. “This compares to around 42 days or fewer for most modern broiler units that supply supermarkets under the Red Tractor scheme.”

The Hubbard variety of broiler was chosen as it suits the outdoor system; once they are old enough to be let out of the sheds they tend to roam more than other more commercial birds like the Ross. However, at Etherley Farm they do still buy in some Ross to get some different weights for Christmas.

The poultry enterprise operates under the small-scale supplier class, slaughtering fewer than 10,000 birds per year, meaning they don’t need a vet on site (though they do still have inspections). The vast majority of their poultry is sold direct from their farm shop or to local butchers.

Richard’s family has been raising poultry since before his father John Keen took on the National Trust tenancy at Etherley Farm in the late 1950s. As he was growing up, the family always produced turkeys for Christmas and ran a milking herd like many lowland farms, said Richard.

After returning from Berkshire College of Agriculture, Richard worked in partnership with his father. Over the years they built up the milking herd to around 100 head to make ends meet. By the late 1990s the milk price was so low they were struggling to stay afloat, so in 2000 they took the difficult decision to sell the cows.

“We probably should have packed up five years before, but you know what it is. You’re so emotionally involved with it, as well as financially, you think we’ll carry on a bit longer,” he said.

After packing up the cows, they decided to build up the poultry enterprise, starting with turkeys for the Christmas market. They also went into Countryside Stewardship, something their landlord was very keen on.

In 2002 they started the campsite, becoming part of the Camping and Caravanning Club as a quick and easy route to get going.

“In those days there were no websites and camping wasn’t that popular,” said Richard.

They were listed on a National Trust leaflet of places to go and started getting bookings over the phone. The first few years were a slow burn, with the income barely covering the cost of topping the field and with Richard spending much of his time cleaning portable toilets.

Then in 2008, during the credit crunch, camping began to get a bit more popular. A few websites such as Pitchup and Camping Ninja set up. Charlie listed their site on all the platforms and things began to pick up. The Olympic year was good as they were inundated with cycling clubs that came to watch the peloton pass by the farm entrance.

As demand grew, they successfully managed to get retrospective planning permission for a campsite with a maximum capacity of 250 adults per night (though they are operating well below this capacity at present). They upgraded their facilities by installing a septic tank to serve a prefab toilet and wash block.

More recently, in 2017 they obtained permission and LEADER funding to convert a couple of their old farm buildings into a permanent toilet and shower block, together with a new farm shop.

“It’s all come together really. We’re just so lucky as we’re in the right place at the right time. If you’d said to my father 30 years ago that we would be operating this sort of facility he wouldn’t have believed you,” added Richard.

Amy and Phil have since developed a website where most campsite bookings are taken. They also use social media to promote the farm, with Amy regularly posting pictures of farm life on Instagram and Facebook.

“It’s quite incredible. One year, the first day we let the geese out Amy put a video on Facebook and it got 15,000 likes,” Richard added.

The campsite now accounts for around a third of their annual income.

We hop in Richard’s pickup truck and drive down to his main poultry field. In it are a dozen or more chicken sheds on skids (to make them easy to move) with chickens roaming out on grass. One shed is home to egg layers but the majority are his broilers.

He opens the door to one of the sheds to show me a recent batch of chicks under heat.

“Once a fortnight I go up to the eastern counties and I get day-old ducks and day-old meat chicks. I buy in between 200 and 300 chickens at a time and 50 ducks too. There are a couple of thousand chickens down here at any one time,” he explained.

They also buy in about 1,000 day-old turkey chicks in June, as well as 150 day old geese chicks in May, to rear for the Christmas market.

All the poultry start off being reared in the houses, and as they get bigger they let them out to free range.

As the birds can go anywhere they’ve struggled with predation in the past: “We used to get some pretty horrific fox kills,” said Richard.

To help they invested in a few llamas, which keep a watchful eye over the chickens and ward off opportunistic foxes. It seems to be working as they no longer get daytime kills, though they still occasionally lose the odd bird as it’s getting dark.

The other threat is buzzards, which are a bit of problem.

“We’ve also got red kites, but they don’t kill the birds – they’ll just take the carrion,” he added.

I was interested to learn that they don’t belong to any assurance schemes.

“If people want to see how we rear our animals they can come and see. We’ve got footpaths everywhere,” explained Richard, gesturing to a smart fence that runs along the edge of the field.

I ask if he believes they farm to a higher standard than Red Tractor?

“I would say we do everything that Red Tractor does. There might be some little things. We’ve got no rat bait boxes in the field but have them around the buildings.

While poultry is the mainstay of the business, they also have a small suckler herd of Sussex cattle and a flock of North Country Mules.

Low stocking rates and direct sales are key elements of their operation. Richard explained: “Everything is just grass-fed. We don’t supplementary feed. It’s 165 acres. If you tell the average person, they say ‘wow, that’s massive’. Really, in this day and age, and without the camping and other diversifications, it’s hard.

“If we were a commercial lowland farm with a breeding flock of ewes and a beef enterprise, we’d struggle to get a living, especially for two families. It would be very difficult – it’s just the way it is. Christmas is a big bonus for us as it is for anybody doing traditional poultry at that time.”

While the business generates more income than most similar-sized farms, it is very labour intensive. In addition to the core team of four – Richard, Charlie, Phil and Amy, who are all full-time – they have two regular part-time ladies, an apprentice and another young farmer who helps out. There is also a part-time butcher and they employ extra help at Christmas.

“In the past we have had Eastern European labour but that’s just naturally faded away as we’ve got more local people,” Richard said.
Just as well, he added, as there is a labour problem.

“They reckon they want an extra 8,500 people to help with seasonal poultry. A couple of poultry farmers I know are having difficulties; because the people came over once a year they didn’t apply for settled status and now they can’t come back,” he said.

Like many farms selling direct, Covid-19 has been good for business.

“During lockdown we got very busy. That’s tailed off a bit but I think we’ve managed to keep a fair few customers. Again, we’re in the right place. If we were in a less affluent area it might be a different story,” said Richard.

Nothing goes to waste and they also get a lot of ‘doggy’ people who come in to buy chicken wings or carcasses to boil up. People buy livers, they buy hearts. They even sell packs of necks for dogs.

“Years ago you just sold the whole bird. Some people just want the breast and we’ve started to market the legs and thighs and people have realised they are really tasty. We make duck burgers, chicken burgers, lamb burgers, chicken sausages.”

“I’ve always been very price conscious, but since my daughter and son-in-law have come in they’ve worked things out to our advantage a bit more. If we can’t make anything at it we won’t be doing it. We have to make a living. You pay for what you get,” said Richard.

The latest venture on the farm is an apple enterprise spearheaded by son-in-law Phil. As well as restoring an old orchard located near the farmyard they have recently planted 53 apple trees – some of which are in the poultry field.

From making cider vinegar and selling it through the shop, he then made apple juice and more recently took a big leap, buying a pasteuriser and a bottling unit to make cider with the help of the final round of European funding through the LEADER program.

The Keen family is optimistic about the future of their farming enterprise. They’ve embraced change and built a highly diversified and resilient farm business in the process. To me, Etherley Farm is a fascinating model of what a small family farm can be. A place filled with people, where traditional common sense methods are used to produce high quality food, processed on site and sold direct to local customers.