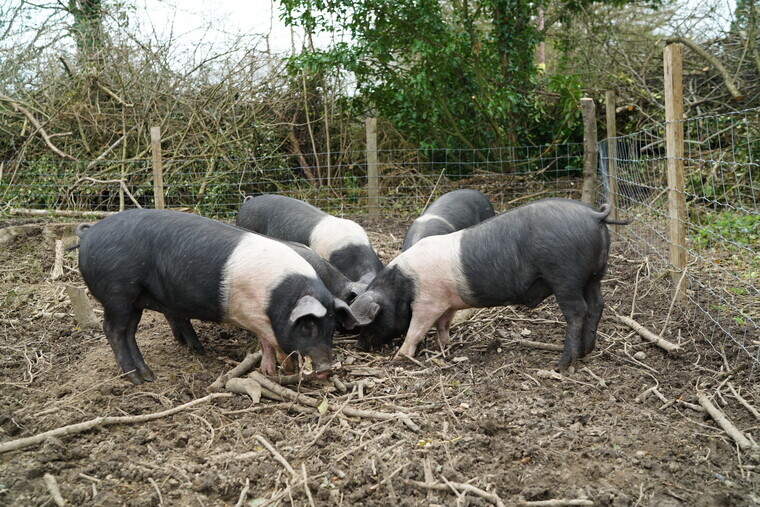 I meet Ben at his 15-acre small holding in Beckley, near Rye, where he lives with his fiancé Sarah. Arriving in his yard I spot five Saddleback weaners in a small area of woodland, next to which was a wooden livestock barn, currently housing a few of his micro flock which had recently lambed.

By his own admission the enterprise is incredibly small scale, but he explained that was all part of the plan: “I’m not having to keep up with economies of scale. I can be flexible and I fit my farming around my full time job as an agricultural lecturer at Plumpton College,” he said.

Over the years Ben has trialled different niche ways of marketing his meat; from supplying local customers with quarter pig boxes to working with a local farm shop in Cranbrook. He found boxes hard work, and when his relationship with the farm shop broke down over a disagreement about pricing he was forced to re-think his business model.

Then in 2018 an opportunity arose to try his hand at serving his pork direct to customers outside a busy pub in Old Town, Hastings.

“I had my food safety certificate and a little grill and I decided to give it a go – roping in mum to help with serving,” he said.

He sold sausages in baps at £5 a pop, calling them ‘hog dogs’, and was blown away by the response. He sold over 200, and adding up his takings the next day realised he’d made more money that evening than he would have done from selling 10 pigs in boxes.

All of a sudden a bug ignited in him; it made him feel good. He enjoyed being able to talk directly to his customer and see their look of satisfaction, especially when he explained he’d reared the animals himself.

”We’re trying to move away from being reliant on other people and tap into every point in the supply chain to make it as profitable as possible,” said Ben.

After doing a few more pop-up BBQ events, he decided to take the plunge and invest in his own mobile food trailer. He bought an old Rice livestock trailer on eBay and an apprentice blacksmith friend helped convert it.

To kit the trailer out as a fully-functioning mobile kitchen he sourced high quality second hand catering equipment online. In total he estimates the trailer cost around £20,000, a big investment but a big step forward, he said.

“We can offer the full farm to fork experience, but it’s not just a raw product; we can stick it out hot. That allows me to be in full control of the whole supply chain and it also gives me a bit of an upper hand compared to other street food vendors who can’t offer that same transparency, which I think is very much a nationwide problem,” he continued.

With the help of friend and family labour he managed to do seven events last year, including several weddings. It hasn’t all been plain sailing, with a faulty generator causing a few stressful moments, but he enjoyed the events and hopes to do a few more this year.

“I’m not a chef but I’ve certainly learnt how to cook, and specialise in offering either a lamb shawarma kebab or a hog roast option,” he said.

He is a member of the Catering Association and is able to write Hazard Analysis and Critical Control Point (HACCP) plans himself.

Ben likes doing weddings as people are much happier and he is given plenty of notice to plan, allowing him to rear animals specifically for different events.

His fiancé Sarah is also a massive part of the business, helping out with events and social media too (you can find Ben on instagram @beastrofarmkitchen).

In the longer term he believes it’s a model that has the potential to allow him to leave his full-time job, though he would need to be doing at least 20 to 30 events a year, he said.

For now he’s content to grow the business slowly through word of mouth and will only walk away from his “every day pay cheque” when he feels comfortable.

His current day job is as an agricultural lecturer at Plumpton College but while he “thoroughly enjoys” the role it means a daily one hour 20 minute commute each way. As a result, he’s recently handed in his notice and will be joining a local egg producer in Cranbrook later this year.

Getting the farming bug

Curious to learn how Ben got into the industry, I ask what inspired him to forge a career in farming?

“For as long as I can remember I’ve wanted to be involved in farming. When I was about 11 years old my mum said you can either have some rabbits or a couple of chickens,” he said.

Choosing chickens, he went on to keep poultry throughout his teenage years and wanted to gain more experience in other areas of farming. His family was less keen and some older members convinced him farming wasn’t a viable career choice.

Ben heeded their advice and decided to study geography at Bath Spa University instead. Then, two weeks before he was due to go, he had a last-minute change of heart and took a year out to gain some practical experience on a small farm locally. He helped out a retiring farmer, who let him rent a couple of paddocks and a few buildings.

He bought some store lambs and built up a local egg round with his flock of 70 layers and also reared 20 turkeys for Christmas.

His uncle James suggested he should learn more about farming, so he applied to go to Cirencester University. He was accepted onto a three-year degree course in livestock production and wrote his dissertation on welfare parameters in broiler production.

After university he ended up working on a free-range egg farm in Cornwall but ultimately knew he always wanted to build his own business. He moved home with 50 Norfolk Black turkeys and built a pen in his back garden, and “that’s where it started,” he said.

Livestock and plans for the future

I ask Ben about his livestock numbers?

“We’ve only got five pigs at the moment, but have had up to 100 pigs in the past. That’s when we were supplying fresh meat into a farm shop in Cranbrook. It came down to cost. “Sorry, you’re too expensive – they were looking at products at around half the price,” he replied.

“With our new business model, those five pigs are worth as much as 50 pigs. The trailer only needs a handful of pigs and lambs to go through it each summer and I’m still able to make a fair return,” he added.

He says in the future he would love to have more pigs and more sheep but has to rein it in and constantly focus on what the business needs.

“We’re only farming a very small acreage, but our gross is bigger than farms three or four times the size,” he said.

He doesn’t understand why a lot of farmers are so obsessed with scale and thinks more farmers should look at setting up their own street food trailers: “I hope other people might want to do something similar – it’s a great way to diversify and maximise your return,” he said.

Our conversation turns to the vegan movement, which Ben believes has highlighted some issues that need to be addressed around unsustainable and immoral practices in the livestock industry.

He recommends watching the Sacred Cow documentary, which shines a light on the importance of sustainable meat and debunks a lot of the hype around so-called sustainable vegan alternatives.

Ben believes more should be done to educate consumers about where their meat comes from. “We’re Beastro – we’re using an animal and we don’t want to shy away from that. Sometimes I think as an industry we are a little too quiet about the fact an animal has been used to make our food; that disconnect is very damaging,” he said.

“With the vegan movement, a lot of people don’t understand the unsustainable inputs that go on behind the scenes. However the marketing campaigns look very clean – it’s not clean, but I am sure the truth regarding the production of vegan food will prevail in time, at which point I hope people will reassess their dietary decisions,” he added

Is regenerative farming part of the solution?

“I certainly believe in it; we have to look towards the past to move forward. Farmers can also help themselves by being more open door and working collaboratively. Over the past 50 years farmers have been pitted against each other in a constant price war, and scale has been seen as the only way to succeed.”

He also believes more value should be put on waste products, citing the return to vogue of farm yard manure in the wake of the rocketing fertiliser prices.

The future of farming

Ben is optimistic about his future and would encourage anyone considering a career in agriculture to ‘go for it’. I ask if he has any words of advice for budding new entrants. “Follow your passion and don’t be afraid to try something even if it doesn’t work out first time,” he replied.