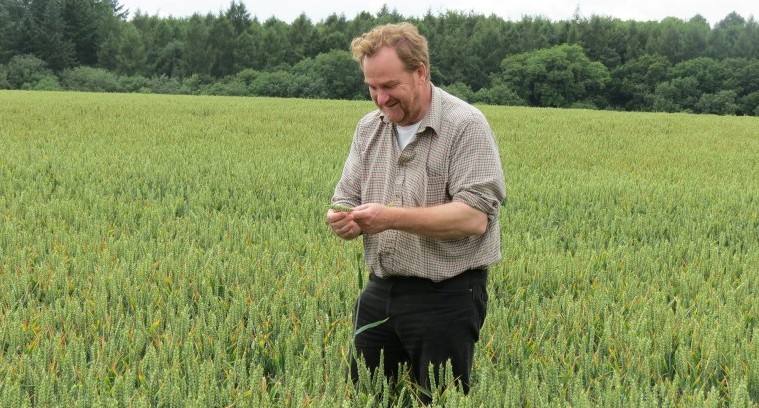 Since Charlie Flindt’s father Peter was the tenant at Manor Farm, the workforce has gone.

Peter Flindt had 11 men in 1959 and Charlie had two when he took over in 1991. They both retired and no one has been employed since. “My biggest failing as a farmer is that I cannot employ anyone,” said Charlie. “Hampshire is full of people who have tried working for me full time and it has all gone wrong and it’s always been my fault. I don’t know why that is.”

His brother in law and son help at harvest, which works out fine. “The best thing I have here is that I’m surrounded by proper farmers with big kit. I have the three metre drill and 24 metre sprayer: they have six metre drills. One has a thermonuclear powered, monster combine – you’ve never seen anything like it. So I can ring him up on a fine morning during harvest, and he’ll come in with this machine which will gobble 100 acres. Well, that’s three days’ work for my little combine.” The neighbour does charge, but Mr Flindt doesn’t always need him, and for the last couple of harvests has managed without his huge machine.

“We have next to no machinery, no staff and I work on the basis that if I’ve got to do something, then it has to be done. I’ll even cry off a cricket match if necessary.” By contrast, Charlie’s father’s men all worked the traditional eight until five day and didn’t do much at the weekends.

Charlie does see as much as possible of his children – Diana, Jonathan and Anthony – and was quite happy to stay indoors on wet days to play when they were small. “Hampshire is full of fathers who don’t see their children because they’re on the six o’clock train from Winchester and the eight o’clock one back, and if the children behave themselves they can stay up to see their fathers. My children are always telling me to push off and do some work.” Perhaps as a consequence of this, the children all have some interest in the farm and may take it on one day. Although they are not studying agriculture, they do help out, especially with the sheep and cattle, and corn cart at harvest.

On the cropping side, though, very little has changed since Peter Flindt had the tenancy. “I am still very boring in my choice of crops,” Mr Flindt said. “We tried winter peas once and it was a disaster. I decided to stick to what we know and what has been here since the days when William Cobbett rode through and said the fields were only good for wheat and beans. On the fields he was talking about, we still only do wheat and beans, because nothing has changed.”

Manor Farm is 960 acres and about 800 acres of that is arable. As a rule, the six year rotation is beans, wheat, barley, rape, wheat barley – and the barley can be spring or winter sown. The other big change has been a shift away from the farm’s own grain storage and drying facilities to relying on the Hampshire Grain co-operative for those services. During harvest, grain is tipped into sheds and loaded on to lorries bound for the co-op’s stores. “The days are gone when we had 500 tonnes in storage on the farm which were constantly being monitored, cleaned, tested for moisture content and fought over with the rats and everything else. I spent my first 15 harvests on the farm with ear muffs, a dust mask and sometimes goggles in the grain store, and whoever drove through to tip the wet grain had to show me the cricket score on a large piece of paper because I couldn’t hear anything.”

Hampshire Grain membership is particularly good for tenants, who usually see their barns and infrastructure written down over the years. “My 1,000 tonne ‘virtual barn’ will always be mine, and mine alone. They do all the grain marketing, which I am very happy to leave to someone else.”

Pictured: Charlie Flindt in a field of Panorama winter wheat