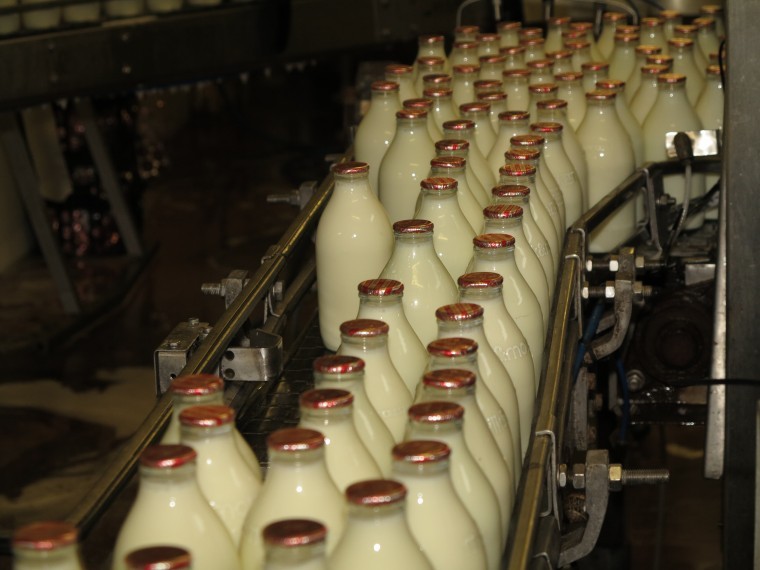 A rapidly expanding dairy business with national ambitions has almost trebled its turnover in the past six years, simply by giving customers what they want.

Southampton-based Pensworth is making a point of not following the herd when it comes to growth, and is cornering a larger share of the liquid dairy market as a result.

The business, which has grown its turnover from £18m to £50m since 2010, is backing dairy roundsmen, expanding its output of glass-bottled milk and providing six-days-a-week delivery to its food service customers across the south of England, Wales and the Midlands.

“The reason we are growing is simple. We give customers what they want,” explained managing director Arthur Dunne. “We offer a six-day service, there is no minimum spend and providing the customer places an order before 11pm, he or she can have what they need the next day.”

That’s an important consideration for Pensworth’s food service and wholesale customers, which include 1,400 nursing homes and 100 hospitals as well as nurseries, schools, restaurants, hotels and contract caterers, not least because of the unique nature of much of the range.

Pensworth supplies liquid dairy products in all the usual sizes, but it also specialises in the kind of quantities that the local supermarket doesn’t stock, from 1/3 pint bottles of milk for school children to three gallon pergals for care homes, schools and other big users.

“If a chef needs several four pint cartons of cream for tomorrow’s dessert, we’ll make sure it’s there for him,” explained financial director Michael Mitchell. “They can’t pop to the corner store, or even their local superstore if we let them down – and so we don’t.”

Pensworth also understands that many people still like to find their daily pinta on the doorstep in a glass bottle, and has doubled the speed of production of milk in this traditional format.

It wasn’t an easy thing to do, given that Pensworth was going against the conventional wisdom, but they achieved their aim by recommissioning the last glass line made in the country after buying it from the East of England Co-op and shipping it to Southampton.

“We recognise that there is a growing demand for milk in bottles, and so we bought and installed machinery that has allowed us to keep pace with what our customers want,” explained project manager Nick Balkizas.

As well as doubling throughput on the glass line, Pensworth has invested in machinery that has improved its efficiency across the whole range and has invested in shrink-wrapping machinery that has allowed it to boost production overall to 60 million litres per annum and speed up throughput. “Before the change we were producing milk faster than we could pack it, which was leading to regular bottlenecks,” explained Nick.

The further good news is that the improvements in filling and packing machinery mean that the company can increase output still further – to an impressive 100 million litres per annum, without needing to expand the production line or move premises.

That’s a clear benefit for a business that is looking for new farmers to come on board and supply the milk it needs as it pursues plans to move its operation northwards.

“We already operate from the Midlands southwards, with distribution depots here in Southampton and in Cheshunt, Watford, Aylesbury, Warminster, Brandon, Hadlow in Kent, Littlehampton, Bridgend, Leicester and, most recently, Bristol,” explained Nick Balkizas. “Our plan is to expand into the north west, Manchester, Yorkshire and beyond.”

To do that, the dairy needs a steady supply of milk, and that’s where farm liaison manager Brian Leggat comes into the picture.

Brian has been charged with signing up new dairy farmers, offering them a straightforward and attractive Pensworth milk contract based on a fair price and without the potential pitfalls posed by complications such as ‘A’ and ‘B’ payments.

With a farming background and 25 years experience in the industry, Brian’s aim is to treat suppliers fairly, offer them advice and help them contribute to the success of the Pensworth operation while earning a good return for their milk. Customers also like the traceability that comes from taking milk direct from individual farms.

While the direct links to suppliers and the support for ‘old-fashioned’ roundsmen may seem at odds with the rapid expansion of a would-be countrywide operation, it makes perfect sense to a company that values relationships above all else.

“We operate like a family company, but one that has the back up, buying power and technological support of a much larger business,” explained Michael. “We believe in speaking to our farmers and giving them one-to-one support, but we also have great IT systems and a strong distribution network, as well as full accreditation to Red Tractor standard.”

The Pensworth story began in 1975 when three dairy farmers, Roger Bishop, his brother Cliff and landowner George Jeffries, put their heads and their herds together to set up the Pensworth Partnership, based at Redlynch in the New Forest.

Although the business has changed considerably since those days – not least because it no longer has any cattle of its own – there is a strong link with the founders, with Roger’s son Gideon the company’s current sales director.

In 2000, Pensworth bought out Vines Model Dairies, which was established in 1905, and began manufacturing on the Southampton site from which it still operates.

At that stage it was sourcing its milk from a marketing group, turnover was £8m and output was 17 million litres a year.

Recent developments have included opening a new depot at Hadlow five years ago. “We have taken that operation from zero to a £6m turnover in that time and we now employ 45 people in Kent,” said Michael. “Overall our staff numbers have grown from 130 to 270 since 2000.”

Thirty per cent of Pensworth’s sales are non-milk products, supplied both to food service customers and to dairymen, who deliver everything from eggs, butter, cheese and yoghurt to bread and toilet rolls to their customers. The company also bottles its own orange juice, Michael Mitchell puts the company’s success down to being ‘fleet of foot’. He explained: “The industry has changed dramatically in recent years, but we have been quick to change with it.”

With the shrink-wrapping equipment and new glass bottling line both contributing to a more efficient operation, the next stage is to complete work on a new and more efficient pergal and cream filling area that will be a further boost to the business and support Pensworth’s continuing growth.