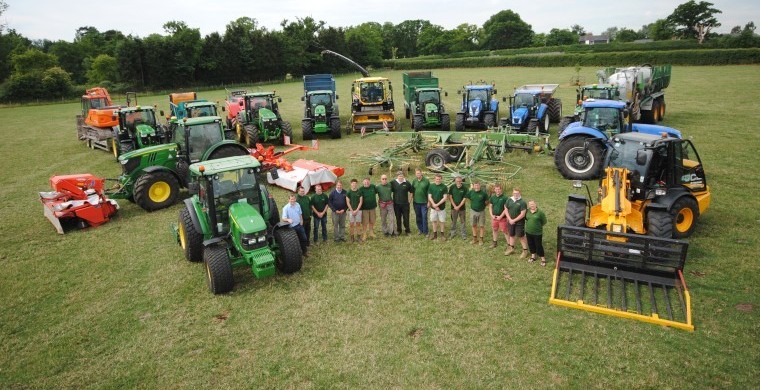 If there is one thing Berkshire-based Shorts Agricultural Services Ltd certainly isn’t short of, it’s commitment.

The contracting business, which this year celebrates 30 years of serving local farmers, landowners and rural businesses, is as committed to the environment and to the future of farming as it is to its customers.

Its focus on quality is reflected in ongoing investment in the best machinery available and in making sure the right number of well-qualified staff is available to respond to farmers’ requests.

Being able to do the job when the customer wants it done – clearly vital in the weather-dependent world of agriculture – takes planning as well as commitment and investment, and that is where Shorts Agricultural Services stands out.

“We drilled 170 acres of maize in just 24 hours for one farmer this season because that was when it needed to be done,” explained agricultural services manager James Winfield.

Drilling such an impressive amount of maize in a single day was made easier by the company’s Vaderstad Tempo F8, described by James Winfield as “the Rolls Royce of maize drills”. It offers precise seed placement coupled with the ability to add micro granules and standard fertiliser.

“Because the maize drilling season is so short, we made sure we had enough trained operators ready to tackle the job and equipped the tractor with Greenstar SF2 so that it could work through the night,” said business development manager Adam Keene.

“Virtually the entire fleet is GPS-compatible, reflecting our keenness to work with new technologies such as yield mapping with the forager and variable rate plans for spreading work.”

The ‘Rolls Royce’ definition could be applied to much of the machinery based at Jade Farm, Winkfield, near Windsor and Planners Farm at Warfield, near Bracknell, the company’s two depots.

The flagship of the fleet is the impressive New Holland FR 700 twin turbo, Caterpillar-engined, forage harvester new this season and supplied by T H White Agriculture. Capable of chopping 14 tonnes of maize in just two-and-a-half minutes, in its first year it will be harvesting more than 5,000 acres of forage for animal feed and anaerobic digestion plants.

“It is the Cat engine that makes all the difference,” explained James. “This is an incredibly well-spec’d machine which sets new standards in forage harvesting. We have had to buy two more silage trailers and a bigger clamp tractor to keep the operation running at a maximum efficiency.”

Forage harvesting is one of the services the company has offered since Gary Short set it up in 1985, working out of Planners Farm. While Shorts Agricultural Services and the closely linked Shorts Group have both expanded considerably since then, it has remained committed to delivering a quality service while adding a range of other skills, including amenity work and agricultural groundworks to its offer.

The quality of service is borne out by the fact that Shorts Agricultural Services has a Royal Warrant for Agricultural Contracting, awarded as a result of its work for The Royal Farms at Windsor.

James’ team provides the Royal Farms with forage harvesting, maize drilling and slurry, lime, digestate and Cropkare supply and spreading, as well as supplying compost the company makes at the green waste processing facility at Planners Farm. The compost is used to improve the heavy clay soil at Windsor.

Working alongside other businesses within the Shorts Group, which adds demolition, tool and plant hire, waste management, composting and recycling to the services on offer, Shorts Agricultural Services prides itself on being sustainable as well as on helping farmers protect the environment.

That aim goes hand in hand with helping farmers boost the productivity of their land by spreading digestate, a nutrient-rich by-product supplied in partnership with Agrivert, a leading waste management company which prides itself on providing “reliable organic waste recycling and management solutions for biodegradable municipal waste, commercial food waste and sewage sludge”.

Agrivert collects food waste and turns it into biogas in anaerobic digestion (AD) plants, one of which is based in Chertsey in Surrey. The process produces gas that is burned in an engine to produce electricity, which is fed into the national grid.

Agrivert chief executive Alexander Maddan explained: “This country produces eight million tonnes of food waste every year, and if it goes to landfill it produces methane, a greenhouse gas that is 23 times more damaging to the environment than carbon dioxide.

“Our AD plants allow us to keep the waste out of landfill, which not only reduces the methane problem but also allows us to turn a problem into a solution in the shape of biogas.”

As well as producing renewable energy, AD plants produce digestate, which is a useful biofertiliser that can then be offered to farmers, which is where the partnership with Shorts comes into play.

“The Chertsey plant produces 200 tonnes of digestate per day, 365 days a year, and we help Agrivert find a home for it,” explained Adam. “We find farmers who want to take advantage of what is essentially free fertiliser and they pay us a small charge for spreading it.”

Adam stressed that digestate varied according to which company supplied it and how fully digested the food waste was. “The material from Agrivert is the best quality we have seen because their processes are carefully controlled,” he said. “They retain the digestate for 100 days, which means the maximum amount of gas is extracted, and that means there is less of a smell when spreading.”

Alexander Maddan explained: “Digestate produced from anaerobic digestion is an excellent fertiliser but it has to be produced properly to ensure it meets the PAS110 standard, is contamination free and is stored correctly to maintain its readily available nitrogen.

“We have a good partnership with Shorts because we recognise that the company has a focus on quality and a culture of innovation.”

What makes the process particularly pleasing for James is that the recycling arm of Shorts Group also supplies food waste to the AD plant at Chertsey, and so making good use of the end product “completes the circle nicely”.

Shorts Agricultural Services recently worked with Agrivert to build a lagoon for digestate storage on a farm at Waltham St Lawrence. The 14,000 cubic metre lagoon will give the farmer direct access to digestate and help Agrivert deal with the 200 tonnes a day produced outside the spreading season.

“Shorts brought the farmer and Agrivert together to do the deal, levelled the site and dug the lagoon,” said James. The farmer has a guaranteed supply of digestate and we benefit from the future spreading work. It’s a win-win situation and our wide skills base meant we were able to do all the construction in house by working with other parts of the Shorts Group.”

James paid tribute to the seven full-time staff headed up by foreman Barry Mason. “We use top quality machinery but we also employ top quality staff,” he explained. “The team can double in the summer and is always made up of people who are well qualified and committed to doing a great job for the customer.”

Barry can find himself working on a lagoon site operating a D6 bulldozer or 30 tonne excavator one day and then raking up grass with the silage team the next. “We need a flexible team to deal with the wide-ranging workload and that’s what we have put together,” he commented.
That broad range of services is a tribute to the way the company has grown and diversified in the 30 years since it was set up by Gary Short, then working with Shorts Timber Services, responsible for clearing woodland along much of the M20 corridor.

Unusually for someone with no background in farming, Gary decided that he would like to move into agriculture and did so with the help of father David – the owner of Shorts Timber Services – who bought him his first tractor.

Gary began providing forage harvesting, baling and spreading services from Planners Farm, bringing in local labour when he needed it and steadily growing the business.

Then, as now, keen on innovation, Shorts Agricultural Services was one of the first contractors in the area to offer bale wrapping and square baling as Gary expanded his offer, taking on Gavin Bartlett as his first employee.

Gavin, who now runs the green waste site, was left to look after the agricultural side of things when Gary joined the group business, which had by now expanded from the forestry work offered by Shorts Timber Services to include demolition, tool and plant hire, composting and waste management.

While the agricultural side now headed up by James Winfield remains a standalone business, it works closely with Shorts Group, a relationship that allows the agricultural team to deliver a total package to farmers and helps the group to divert waste from landfill.

“As a simple example, the demolition business and our skip hire arm provide us with hardcore which Shorts Agricultural Services can use as the base for new roadways for farmers,” James explained.

“Our waste management team provides raw material that our composting operation turns into compost which we market and spread onto local farms.

“We are also a collection hub for Agricycle, which means we can deal with spray containers, fertiliser and seed bags and shotgun cartridges. Shorts Group operates a fleet of 24 waste service vehicles but over 90% of what they collect avoids landfill. The team sorts it, recycles what is useful, composts anything green and sends the rest to a waste-to-power incinerator.”

Bringing the various threads of the business together is inevitably a challenge and means regular meetings between James and colleagues Jason Southam and Steve Keene, who look after the plant hire operations in Ascot and Milford respectively, Adrian Joy, who heads up the demolition operation, Lee Spicer (recycling), Gavin Bartlett (composting) and Tom Cobley (commercial waste).

General manager Mike Banham brings everything together across the group, which now numbers 118 people.

The agricultural business now provides a broad range of services. “The only thing we don’t do is combining; we have the equipment and the manpower to tackle pretty much any other job on farm,” said James, who joined the company as agricultural services manager in 2006.

He was brought in to expand the company’s amenity offer and has made Shorts Agricultural Services a force to be reckoned with on the polo field. “Polo is very big around here and it takes a lot of work to keep the pitches in top condition,” said James. “We spread over 4,000 tonnes of sand a year.”

Shorts Agricultural Services operates nine John Deere R Series tractors supplied by Farol and three New Hollands supplied by Oakes Bros – including one compact tractor – together providing a line up which offers everything from 35 to 250 bhp.

A range of grassland equipment from quality names such as Kuhn, Watson, Opico and Krone is supported by silage trailers from Warwick, Bailey, Richard Weston and Stronga. There are also two Rolland rear discharge muck spreaders for manure and compost.

Spreading of Cropkare and lime is taken care of using five Breadal trailed spreaders, while groundworks and muck loading are carried out by two 14-tonne and one six-tonne Doosan excavators.

Shorts Agricultural Services has invested heavily in precision farming and has five self-steering/ISO Bus control modules that can be fitted to tractors right across the range to allow variable rate lime and fertiliser spreading.

“When input prices are high and commodities low these services become even more valuable to farmers,” explained Adam. “The Joskins and forager, produce variable rate maps that can be managed for each customer using Gate Keeper software. We can tell the farmer exactly how much has been spread or harvested, where and when.

“We are continuously investing in, and updating, our fleet to make sure we have the right equipment, of the right quality, to support our customers in whatever they want us to do,” James summed up. “We make sure the equipment and the operators are capable, reliable and right for the job.”