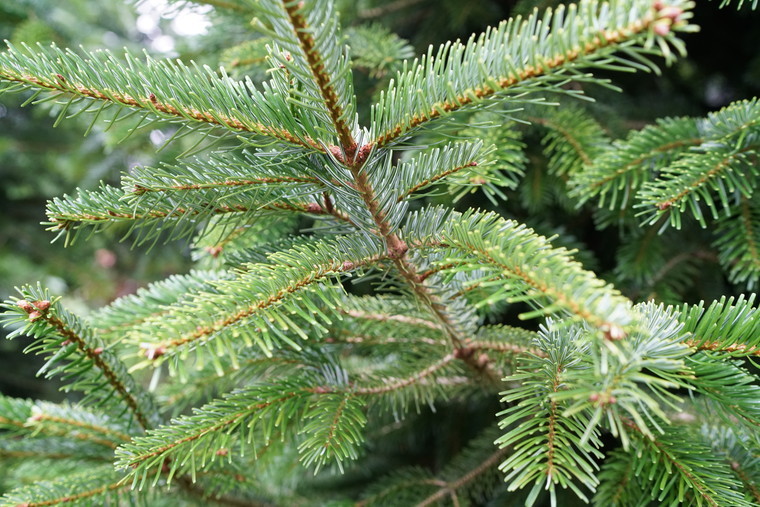 Driving into the large concrete yard at Littledown Christmas Farm in Westfield, the first thing I notice are three giant Christmas trees lying on their sides. They are Nordmann Fir trees – the most popular variety in the industry, explained grower Jon Baker. A team of four had felled them the previous day from their mature plantation.
“The trees weigh well over one and half tonnes when they reach 40 to 50 feet and you don’t want them to fall in the wrong place,” said Jon.

Safety is paramount. His son, Lloyd Baker, is a professional tree feller and used a chainsaw to cut the trees down.

“This is a family run business, which includes all generations,” added Jon.

“Growing Christmas trees isn’t a get-rich-quick scheme. The big trees can take 35 years to get to size and involve many hundreds of hours of labour to create the perfect pyramid shape. However, they can fetch several thousand pounds each when selected for harvest,” said Jon.

The tallest of the three, a 60-foot specimen with an enormous trunk, is destined for Hastings town centre. Locally they also supply Battle Abbey. Notable customers include 10 Downing Street and other high-end clients and establishments, some of which cannot be mentioned, Jon added.

The majority of their trees are cut and sold direct from their farm during a six-week season, which starts from around November 20 and finishes on 24 December. They sell all shapes and sizes and many of their customers like to pick out their tree in the plantation, “returning year after year,” he said with pride.

It’s a market that has grown significantly over the past 30 years. Today approximately eight million trees are sold in Britain each Christmas.

“A percentage make their way from foreign waters, though there is no reason for us not to be 100% self-sufficient,” said Jon.

It wasn’t until the early 1990s that Jon and his father spotted an opportunity to grow Christmas trees as a crop on farmland. Trees were previously often harvested by conventional foresters growing Norway Spruce plantations for timber and then selecting them for thinning based on their suitability as Christmas trees.

Up until the mid-1970s the land at Littledown farm was used for vegetable production to supply local shops and stalls.

Jon said: “When supermarkets began appearing, the little shops began to disappear and our business had to adapt and evolve. In the 1980s we started growing more potatoes than vegetables, which we supplied to fish and chip restaurants.”

In 1988 his father was faced with a decision. Invest in a new potato harvester or pack up growing potatoes. The decision was made easy when he discovered he could buy in better quality potatoes at a cheaper price than he could grow them.

From that point on he became a potato wholesale merchant. To this day he continues to buy potatoes from UK producers, sourcing as locally as possible (often from growers on the Romney Marsh).

With the land available for other uses, they began to think up alternative ideas. By now Jon had spent three years at Plumpton Agricultural College gaining valuable skills as a farmer and grower. He gained experience working on different farms driving tractors and in logistics. Then during a holiday in Scotland he met a Christmas tree contractor and something clicked in his head.

In 1991 they decided to go for it, first spending a considerable sum on rabbit fencing a five-acre field. They ploughed and cultivated the field to get a seedbed and then Jon put lines of string out and planted 5,000 five inch Norway Spruce whips by hand.

“We knew we’d have to start stepping the crops out, so the following year we planted another two acres. We kept on going,” he said.

On the third year of planting, Jon decided to buy more expensive trees, a variety called Nordmann Fir. They sourced the whips from Denmark and at the time they were roughly double the cost of the Norway Spruce. However, they were becoming increasingly sought after – “due to being more ‘needle fast’, which means they retain their needles,” explained Jon.

“They are considerably better as the needle has a ball joint. Even if the tree dries out a bit the needle is more likely to hold on,” he said.

Nordmann Fir now make up 90% of the trees the business sells, he said, and they represent around 70% of all trees grown and supplied across the industry.

“With the increasingly dry summers, most growers have switched to planting in the autumn to minimise issues with drought,” he explained.

“They’ve got six months to get their roots down, so if we do have a mild spring/summer they’ve got a better chance of survival,” he said.

Most planting in the industry is now done by machine – which is both more efficient and cost effective, explained Jon, although he added that some remote and steep inclines still had to be planted by hand.

They don’t touch the trees for at least three years, giving them plenty of time to get established, explained Jon. Then in their fourth growing season they begin the process of reducing branches and shaping the trees using long handled secateurs and knife poles.

“We want it to grow like a pyramid – we need to manage its growth so it uses its energy where it should be, so it produces a tree that people want,” he said.

They then continue to manage the growth each year until they are ready to harvest, which can be from their eighth growing season (around eleven years of age – at the earliest). At this age the fastest growing trees can reach six to eight feet tall.

They start harvesting the trees from around mid-November. This starts with the largest trees for town centres and continues until Christmas eve. It’s a busy time and 18-hour days are common during the season. Jon and his son Lloyd mainly use a chainsaw or a slicer – a small two wheeled machine with handle bars and sharp jaws – to cut the trees.

From wholesale to retail

Jon explained that the initial years were difficult as they had to invest significant amounts of time and money in the business, with no return. They began by supplying trees wholesale to local garden centres. It didn’t take long to realise they were giving a big chunk of their profit away and weren’t getting the recognition for all their hard work.

In 2001 they decided to start selling their trees direct from their yard and “have never looked back”, he said.

During this time their large concrete yard is transformed into a massive Christmas tree retail space which is clean, flood-lit and wheelchair accessible.

In the early days one of the things they did to help attract customers was to offer the choice of a free bag of potatoes, bag of logs or a holly wreath with every tree.

“People love a freebie and it’s a real point of difference to other suppliers,” he said.

“It’s a deal that gets people talking on and offline,” he said. It’s also a deal that has helped grow their retail sales over the years.

In addition to selling the trees, they also sell stands, offering only well-made, long-lasting products. In recent years they have also switched to wrapping the trees using bio netting, a more expensive product but one that is biodegradable.

Social media is increasingly playing an important role in the marketing of their business. They share images and videos of their trees, both on the farm and in customers’ homes. One of the videos shared on Facebook last year showed Jon and his team delivering a tree to 10 Downing Street.

Asked about the grower awards, Jon explained that it was an honour bestowed on the winner of the annual British Christmas Tree Growers Competition (BCTGA), which they won in 2020. They also won in 2009 and since then have been runners up on several other occasions.

The family farm supplies the palliative care charity St Michael’s Hospice with Christmas trees free of charge every year. It’s something they have done for the past 18 years. The charity uses the trees to help fundraise over the Christmas period, generating upwards of £25,000 in donations each year.

I ask Jon what his plans are for the business?

“To continue to produce high quality Christmas trees at a reasonable price. We want our customers to enjoy visiting a local Christmas tree grower and for it to be part of their family Christmas tradition,” he replied.