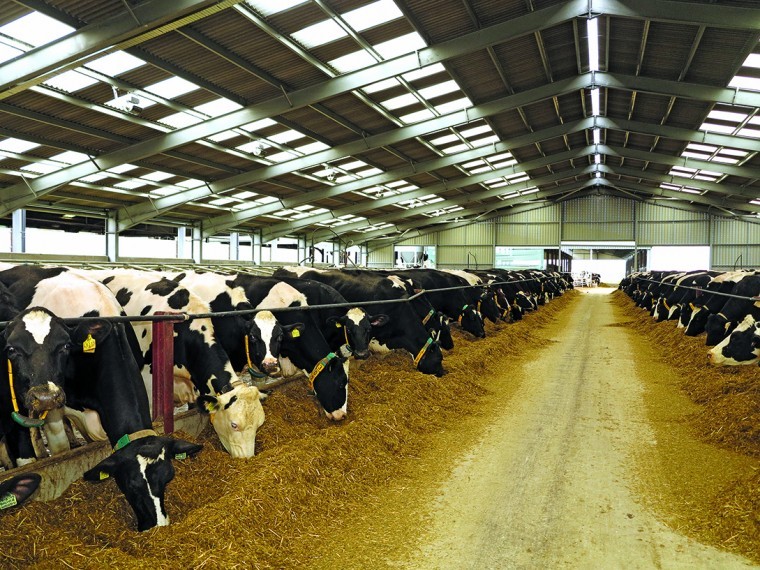 While supermarket price wars and Russian trade sanctions are just two of the pressures making life difficult for many dairy farmers at the moment, successful businesses are still making a living out of producing milk.

What it takes is an efficient operation, high standards and good productivity, all of which depend on investing in the right equipment and the best possible environment as well as on having an uncompromising focus on herd health.

For Ken Ledger, who milks a 500-strong herd of Holstein-Friesians at Home Farm, Ringwould, near Deal in Kent, that focus is unshifting – and the premiums his milk commands illustrate the benefit of that approach.

Ledger Farms Ltd, the business he runs with his brother John, has just invested in a new cubicle shed built by Robinson Structures Ltd and designed to provide more space and comfortable living conditions for the steadily expanding herd.

The 60m by 40m galvanised building is the biggest Robinson Structures has built in this part of the world and is designed to hold 270 cattle in comfort.

The extra space has allowed the family business to take on another 50 cows this year and the current plan is to grow the herd to 600 as Ledger Farms continues to defeat the odds and make a success out of dairy.

The herd is currently producing 9,500 litres of milk sold per cow, a yield that, when coupled with the size of the herd, means Ledger Farms picks up a bonus because of the amount it is producing. “It’s more efficient for the buyer to pick up the same amount of milk from fewer calls and so they pay a bonus based on how much they collect,” Ken explained.

Bonuses are also paid for factors such as the cleanliness of the milk, which means that better-run dairy farms are more profitable than the competition. “It’s about consistency and efficiency, and that’s what we set out to achieve,” said Ken.

It’s also about happy, healthy cows, and that’s what the new cubicle shed is designed to produce. “Herd health has always been our priority because it ensures a good yield and a more efficient operation. The new shed has given us the space we were looking for to accommodate an expanding, higher-yielding herd.”

With the sea not far away, Robinson Structures designed the shed with a galvanised framework that will ensure a longer life by countering the effects of salt-laden winds as well as the usual tough environment all cattle buildings face.

The shed has also been built with a slatted floor that sits on top of a 2.5m deep slurry tank, a design that allows the slurry to be pumped out and put to good use while reducing the amount of waste that builds up on the floor of the building.

“It’s all about good, efficient management,” Ken explained. “The new building is better for the farm but, more importantly, it is also better for the health of the herd. It gives us more space to bring in new cows but it also gives them a better environment.”

With weather an issue, the building is screened on the windward side but open on the other and is designed with an open ridge to give good ventilation. It was also built to take the 150kW of solar PV panels installed on the roof by BEBA Energy UK.

“Not only is this the biggest building we have constructed in the south east, but it is also built to a high specification,” said Alex Robinson, construction director for the Lewes-based steel-frame experts. “It was clear from the start that the Ledgers were determined to achieve the highest standards of welfare for their animals and the building has been designed with that in mind.

“Even for a cubicle shed, this is a particularly spacious building and we were careful to combine good ventilation with robust weather protection. The galvanised frame is a must in this location and the frame was designed to cope with the extra weight of the solar panels.”

Robinson Structures worked closely with Wilson Agri, the Coleraine, Northern Ireland-based manufacturers of the cubicles, to make sure that the building came together smoothly, and were pleased to find that Torran Construction had been asked to do the groundworks and civil engineering.

“We have now completed a number of projects with Torran and are really pleased with the quality of their workmanship and their teamwork approach,” said Robinsons’ sales executive Charlie Highton. “It’s always good to work with a contractor that thinks the way you think and has similar high standards.”

Ken and John Ledger’s son Dennis began the family business in 1939 at nearby Ripple Farm and first farmed at Ringwould as tenants. The 3,000 acre holding is now used for arable crops as well as being home to the dairy herd, which is used to supply Capital Milk.

Ken asked Robinson Structures to deliver the project because of the company’s reputation for quality steel-framed buildings and said he was impressed with the results and with the company’s flexible approach to meeting the inevitable challenges.

“The team was approachable and easy to talk to and very responsive when there were decisions to be made,” he commented. Robinson Structures also helped in negotiations with the planners over the building, which had to be redesigned with a shallower roof pitch to meet the local council’s requirements.

The final result is a building that looks to have found favour not just with the customer and the supplier but also with the new residents. “The cows look clean, they look healthy and they look happy, and if that is the case then I am confident they will give more milk,” said Ken.

Alex Robinson pointed out that he had first began discussing the new shed when he had met Ken at the Lamma agricultural show and said that Robinson Structures would be there again in January to highlight the company’s products and skills.