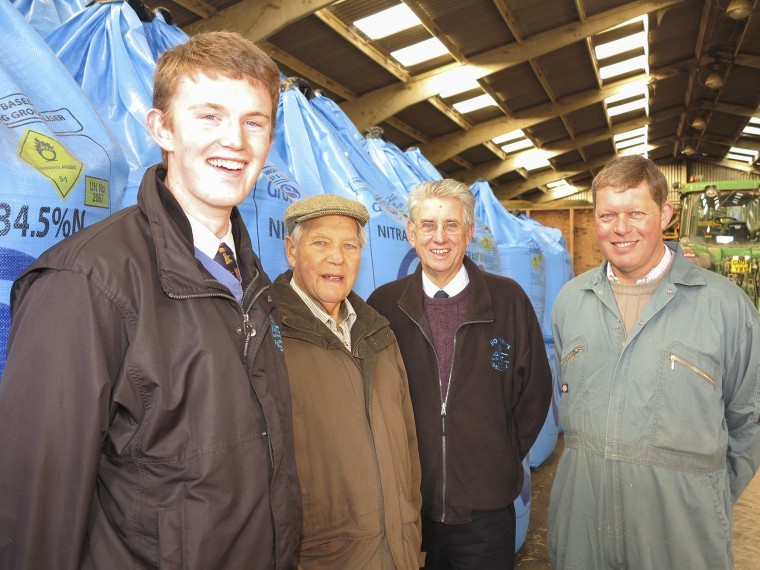 One thing, though, has remained constant throughout half of his long career, and that’s the sales rep from Agricultural Central Trading, better known throughout the industry as ACT.

Jonathan Cowans, area manager for the well-respected, farmer-owned co-operative, has been working this patch for 39 years, during which time he has built up an unbeatable relationship with Norman and his son David, who own and run Harp Farm, Boxley, near Maidstone.

David was still at college when Jonathan began working the area in 1975, taking over from the first representative to call at Harp Farm, John Toon.

That relationship will in future be in the care of a younger man as Jonathan hands the baton on to Luke Smith. As he takes on the challenge of following in Jonathan’s footsteps, though, Luke has already won the support of Mr Attwood senior.

“We need more young men in farming and I am sure he will do a great job as well as bringing in new ideas,” said the 91 year-old, who began his career at the age of 14 with three acres, two pig sties, 50 chickens and some fruit trees.

“We have had great service from ACT over the years and I am looking forward to that continuing.”

When Norman first joined ACT in 1972, it was to buy feed and supplements for Harp Farm’s pigs and cattle as well as fertilisers for the arable side of the business.

“It is rewarding to think that we have been able to grow the business in the South East significantly since the early seventies despite the steep decline in livestock in this area,” said Jonathan. “ACT now has a larger customer base and increased sales and is continuing to thrive with the support of its members.”

ACT was established in 1962 and is now active across the whole of the country, supplying farms from Cornwall to the Shetland Isles as well as in Wales and Scotland.

The advantage of being a shareholder – as Norman and David Attwood have found – is that members receive a year-end bonus on turnover across all products, as John Hamilton, managing director of ACT, explained.

John added: “The business is farmer owned and has an enviable record of consistent turnover growth, profitability and growing trading bonus to its farmer shareholders while maintaining a very strong balance sheet.”

That bonus, which can be substantial for a farm spending tens of thousands of pounds a year on inputs, is something that is always at the back of David Attwood’s mind. “ACT’s prices are already keen, and knowing that I will get part of my spend back at the end of the year is an added bonus,” he said.

ACT also provides flexible options when it comes to the front end of the process and can arrange finance to spread the cost of the agro-chemicals that are now so vital to most farming businesses.

“We also try to help out our customers by being aware of where the market is going,” added Jonathan. “Unlike many companies that are just keen to get the customer to sign on the dotted line and commit to the purchase, we will advise farmers to wait a week or two if we feel prices are about to fall.”

That’s the kind of benefit that reflects the long-term approach of ACT, which is keen to see managers like Jonathan develop relationships based on trust and a shared approach to the challenges posed by modern farming and the costs involved.

It’s an approach Luke Smith is already putting into practice. After spending six months joining Jonathan on his regular trips around the countryside meeting farmers in Kent, East Sussex, East Surrey and part of Essex, he is keen to build on the work that his predecessor has done over the past 39 years.

He is also looking to expand the ACT reach in parts of Surrey and in West Sussex and is planning to use his young farmer contacts to encourage more potential customers to sample the company’s offering.

Luke knows he faces a steep learning curve – “Jonathan has been doing this job for many years and I know I won’t know all the answers from day one,” he said – but is confident that with the support of the backup team in Chesham he will be able to provide the same level of service.

He also understands farming from the other side of the coin, since the 22 year-old Plumpton Agricultural College graduate has 150 sheep and 60 head of cattle of his own.

Luke, who admitted he had been driving tractors “since my feet could reach the pedals”, has picked up a lot of knowledge from mother Amanda, who manages a beef operation for a farm in Surrey.

After leaving school he worked on a dairy farm for a year before gaining a National Diploma in Agriculture from Plumpton in May 2012. He then moved to Merristwood College, not to study but to work as a stockman before spending three months as estate manager.

In May of this year he left Merristwood to join ACT as Jonathan’s understudy and is now keen to take on the role himself on 1 January 2015. “I am hoping I can continue Jonathan’s great work in building up the company’s presence in the South East while using my own network to expand its customer base,” he commented.

“I am really pleased to be taking on this job and I can assure farmers and landowners that I will be giving them the same level of customer service they have come to expect from Jonathan over the past 39 years.”

Jonathan, who is FACTS, Basis and AMTRA-accredited, has been able to offer agronomy advice to his customers and stressed that ACT provided a great deal of training and back-office support to its team in the field.

“If customers need advice such as health plans for livestock, Luke can call on expert advice from Chesham,” he commented. “ACT delivers a wide-ranging service to its customers and I am confident that I am leaving it in good hands with Luke.

“We wish Jonathan well in his retirement and we look forward to dealing with Luke in future,” added David, who grows combinable crops on about 1,700 acres of land at Harp Farm and also keeps 150 ewes and followers.

Much of the remaining 300 acres at Harp Farm are in environmental schemes and David and his father work closely with Maidstone Borough Council to protect part of the Kent Downs Area of Outstanding Natural Beauty that extends onto his land.