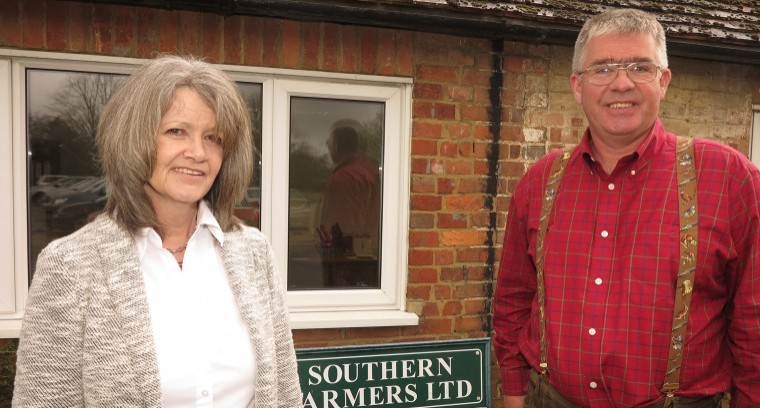 With a busy purchasing team spending all day making sure they are getting the best deals for their members, it would be no surprise to discover that Southern Farmers’ telephone bill made for eye-watering reading.

But that’s not the case. As managing director Brigitte Fifield pointed out: “Getting a great deal on things like telephone bills is what we spend all day doing, and so our landline costs are actually very low.”

The not-for-profit buying group offers its members low prices on a huge range of agricultural goods and services, with forward fixed price fuel contracts one of the more recent items – and one that is already proving very popular.

As Southern Farmers chairman Richard Benge explained: “Most of our members find they save enough money on fuel alone to recoup their membership fee and admin charges. Members who make full use of their membership can save hundreds or thousands of pounds a year.”

But it’s not just about saving money. “Equally importantly, we save our members time,” said Richard. “Farmers are busy people and increasingly operate with fewer staff. What they don’t want to do is spend half a day ringing around various suppliers to find the cheapest source of fencing wire when they could just make one phone call to Southern Farmers.”

By making that one call, members will know that they are getting a good price that has been checked and generally includes a discount that has been specially agreed with the not-for-profit buying group.

And that’s not the only benefit of ringing the Southern Farmers buying team to order what they need. “If you take fencing wire as the example, the person taking the call will check whether or not the farmer also needs the rest of the kit, like staples and straining posts,” explained Brigitte.

“You would be surprised how many times our members ring up for one thing and then, when we prompt them, realise that they would have forgotten something so vital that they wouldn’t have been able to get the job done without it.”

As Richard added: “It’s a bit like having your own secretary – except in this case there is a whole team of secretaries lined up to help – and they save you money into the bargain.”

The system is built on confidence, something that Southern Farmers works hard to build up. “It underpins the whole system,” explained Richard. “Farming is built on trust and the buying group works in the same way. Members know that the buying team will deliver what they want at the best price and have the confidence to let Southern Farmers get on with the negotiations while they get on with the day job.”

While the farmers trust Southern Farmers, the organisation relies on a bit more than trust to make sure it continues to deliver the best possible deals for members.

The purchasing team of Rosie Wickham, Sarah Tester, Rachel Cooper, Rosie Budd and Maria Weeks not only spends a lot of time talking to suppliers across the country to make sure they can offer members low prices, but also check the deals stay competitive.

“We use hundreds of suppliers but we still take the time to make sure they continue to offer our members the prices and discounts we agreed on day one,” said Brigitte. “We make random spot checks and we will bring a supplier to heel if we feel they need to sharpen their pencil.”

While some members prefer to ring the team and let them do the ringing around – saving time and effort in the case of an unusual purchase or a lengthy shopping list of items – others will use the supplier database and contact the supplier direct, booking the goods to their Southern Farmers account in order to take advantage of the Southern Farmers discount.

The number of members taking advantage of that discount continues to grow steadily and has now reached 1,100 members, with the area covered also continuing to expand.

Southern Farmers has now gone beyond its Kent, Surrey and Sussex roots to offer the same advantages to farmers and landowners in Hampshire, Essex and even the Isle of Wight. It takes its responsibilities to new members seriously.

“Whenever I talk to a potential new supplier these days I always ask if they can deliver to the Isle of Wight as those members are as important as our more local farmers,” said Brigitte. “We will be at the Isle of Wight Show at the end of June to catch up with members and hopefully sign up a few more.”

Members pay an annual membership fee to join the group and then pay a small administration charge on each invoice. In return, along with discounts and the time they save, farmers have the convenience of settling one single invoice each month instead of dozens.

The service doesn’t end there. “If one of our members isn’t happy with something that they have ordered through Southern Farmers they simply tell our accounts team and we take it up with the supplier,” Brigitte explained.

“We won’t pay the bill until the problem has been solved – and we sort it out, not the farmer. They can just get on with farming. The other thing to bear in mind is that when the group as a whole raises a query with a supplier, they listen.”

Because of the scale of Southern Farmers, which currently has a £34m turnover, the group deals with the corporate team when it comes to mobile phone accounts, something which guarantees problems are sorted out quicker than they are for domestic customers who call in to their network’s High Street shop.

When it comes to electricity contracts, even that level of turnover isn’t enough to get the best possible deal, which is why Southern Farmers is part of an even bigger agricultural buying group which has negotiated what Brigitte described as “really incredible prices” – so incredible that the group has just signed a fixed price deal which will run for the next two years.

Joining the group costs just £125 a year, regardless of the size of the operation, with smaller farms benefiting from the buying power made possible by the bigger players. “We support farmers right across the spectrum, from five-acre smallholders to agricultural businesses working across a dozen or more sites,” explained Richard.

The number of items on offer is impressive and includes everything from bottled gas – available at impressive discounts – to drymix cement, fencing materials, animal feeds, mobile and landline telephone services, electricity, building materials, solar PV and biomass contracts, tyres, lubricants and even white goods such as commercial and domestic freezers.

While construction materials needed for building work, extensions or new projects is a major part of Southern Farmers’ turnover, less mainstream suppliers include a physiotherapist specialising in field sports injuries.

The list of suppliers – which currently stands at well over 400 – includes a gunsmith, while Southern Farmers can also put farmers in touch with a finance house if they are looking to buy a tractor or other vehicle.

The benefits of using Southern Farmers when undertaking building work are clear. Apart from the extent of the discount available on big-ticket items such as concrete and steelwork, it means that materials are delivered to the site as and when they are needed – and invoiced in one hit at the end of the month.

Richard joined Southern Farmers on the advice of a farming friend – and soon wished he had done so earlier. Because his farm is low-input organic, he estimates that he only spends between £30,000 and £40,000 a year but saves somewhere around £6,000 in return for his £125 membership fee and admin charges.

“The way to make Southern Farmers work is to use it for all your purchases rather than just some of them. The more you use it, the more you spread your membership fee across a wider range of purchases, saving both money and time.”

Farmers who are interested in talking to the team about the benefits of joining Southern Farmers will once again be able to visit the group’s stand at the Heathfield Show, which this year (2016) takes place on Saturday 28 May.

Click here to read the full feature on Southern Farmers